LEXINGTON, Ky. (Aug. 2, 2011) — After 37 years of working in the coal mines in Eastern Kentucky, Ernie Gillispie of Canada, Ky. in Pike County, had black lung disease. Suffering from the condition for more than 25 years, Gillispie said it became a challenge to walk even five feet and forced him to begin using a wheelchair in December 2010. However, an artificial lung device pioneered at UK HealthCare led to Gillispie's being eligible to undergo a life-saving transplant.

Although there was much uncertainty when the Gillispies first came to UK HealthCare, they were willing to take chances to improve Ernie's quality of life. "We met with Dr. Charles Hoopes to see if there was anything we could do," said Vanessia Gillispie, Ernie's wife of more than 30 years.

Hoopes, UK HealthCare's new director of the UK Heart and Lung Transplant Program and the director of the Ventricular Assist Device (VAD) Program, shared with the Gillispies an option that could save his life, but risk was involved because it had not been done before at UK.

Hoopes recommended Gillispie undergo surgery to allow the use of an artificial lung and double lumen catheter, an extracorporeal membrane oxygenation (ECMO), to improve his condition and quality of life, with the hope that this improvement would make him a candidate for a double lung transplant.

ECMO, which is used in cases so severe that the usual therapy of a respirator, machines and extra oxygen are ineffective, allows blood to receive oxygen from the artificial device. This particular device was created by UK HealthCare's surgeon in chief, Dr. Jay Zwischenberger and is used worldwide.

With the assistance of the device, Gillispie proved himself to be a candidate for lung transplantation but without it, he would not have been strong enough for a transplant surgery, Zwischenberger said.

Not only is this lung technology significant to UK HealthCare, Zwischenberger said, it is also significant to Kentucky, "This [lung technology] sets us up to be able to bridge patients to lung transplant, rather than having their condition continue to deteriorate while waiting for a transplant," he said. "Dr. Hoopes is an early adapter of this technique and we are now one of only a very few places in the country that utilizes ambulatory ECMO as a bridge to transplant."

Zwischenberger has been working on the development of an artificial lung for 25 years and began partnering with co-inventor Dongfang Wang, M.D., Ph.D., UK Director of the Artificial Organ Laboratory, nine years ago on the double lumen catheter (DLC) project.

"The machine proved that Mr. Gillispie's lungs worked properly, and he could live a normal life," Hoopes said. "If a patient cannot exercise after their breathing is 'replaced' with an artificial lung, then transplant will provide little clinical benefit. The limited number of donor organs can be used in patients who will most likely benefit. Artificial lung technology allows us to be certain that the patient potentially receiving the organ transplantation is physically well enough to undergo the surgery and recovery.”

After only three days using the artificial lung, a successful double lung transplant was performed on April 11, 2011.

"I can breathe again and before the ECMO I couldn't do anything," Gillispie said. "Before the surgeries if I tried to walk 25 feet, I'd collapse. But, two hours after the ECMO surgery I was riding a bicycle and four hours after that I was walking down the hallway. And, it keeps getting better from there. It's a new breath of life."

Gillispie says he plans to live life to the fullest. He continues clinic visits at UK HealthCare and is looking forward to taking his grandchildren fishing. 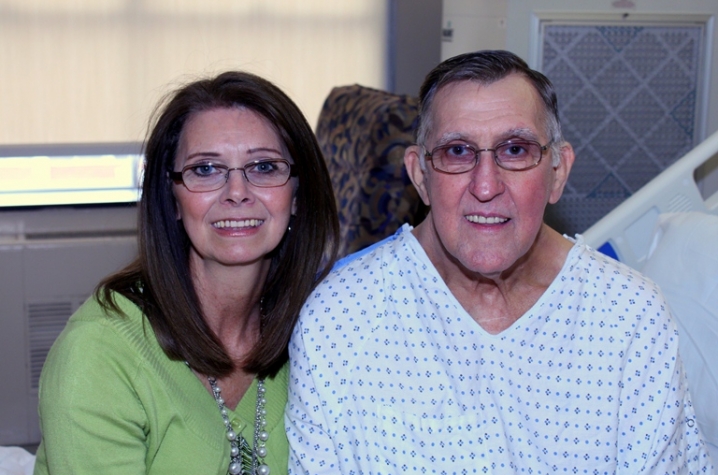