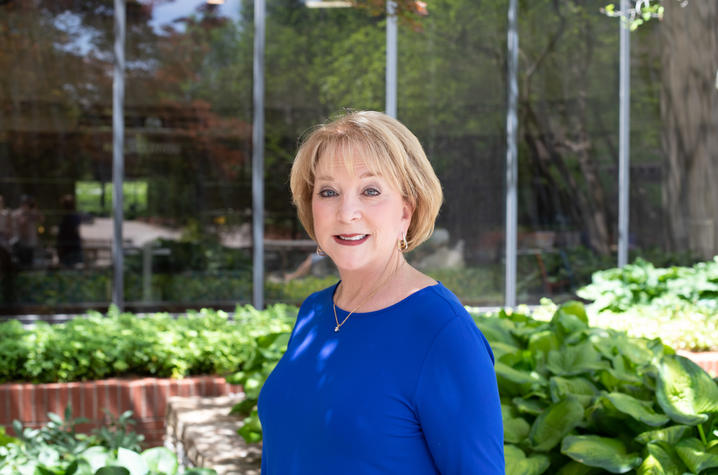 Betty Graham is a skin cancer and breast cancer survivor. She has been treated at the UK Markey Cancer Center primarily by Dr. Emily Marcinkowski. Hilary Brown l UK Photo

After noticing an unusual spot on her leg, a skin cancer screening found eight precancerous lesions. When caught early, these types of lesions can be removed and cured. Graham, at the time an avid tanning bed user, now regrets that behavior.

Graham now gets an annual skin cancer screening. Each time, her doctor finds between two and 10 precancerous lesions. Now, she is so grateful for her screenings because they keep her healthy and safe.

Dr. Emily F. Marcinkowski, a surgical oncologist at the University of Kentucky Markey Cancer Center, recommends that everyone see a dermatologist once a year for a skin cancer screening. Screening is a visual exam conducted in a dermatologist’s office and only takes about 10 minutes. Here are a few things you can expect during a screening:

“It’s normal to feel a little embarrassed about undressing for a screening, but don’t let it stop you,” said Marcinkowski. “It may be uncomfortable for a few seconds, but it will be very quick – and it can save your life.”

Five years ago, Graham had cancers removed from each ankle at a dermatologist's office in Texas. Because she is diabetic, the stitches didn’t heal well and she developed an infection that required IV antibiotics. Then two years ago, a biopsy by her dermatologist in Lexington showed skin cancers in the same place on each ankle.

“The dermatologist in Texas removed the skin cancers in the office,” Graham notes, “but obviously they didn’t go deep enough to get it all and it had returned.”

That’s when Graham decided to go to Markey for treatment.

“I knew if I went there it would be done correctly, and it was,” said Graham.

Marcinkowski made sure Graham’s blood sugar was under control before removing the cancers. Graham, who was asleep for the operation, had numerous stitches on each ankle. She was given antibiotics and had close follow-up care to prevent any complications.

“Dr. Marcinkowski was really cautious,” Graham says. “She was very, very proactive in making sure everything was done properly to avoid infection.”

Basal cell and squamous cell carcinomas like Graham’s can be cured if they are caught early. Patients with these types of skin cancer typically won’t need any treatment beyond the removal of the affected area. Melanoma can also be cured if it’s caught in the early stages before it spreads to other parts of the body.

“That’s why it’s so important to be checked at least one time a year,” said Marcinkowski.

So do you need an annual skin cancer screening? Marcinkowski’s answer, no matter who is asking, is yes.

People most at risk for skin cancer include those who are immunocompromised, including smokers, diabetics and those who have had solid organ transplants. Individuals who have fair skin or sunburn easily, or those who have used a tanning bed are also at a higher risk.

Graham is grateful for screenings that have caught her cancers early enough. She is a survivor in more ways than one – she also had precancerous colon polyps removed because of a colonoscopy screening and she survived breast cancer.

“You should get a skin cancer screening just like you would go to the dentist every year or get your eyes checked,” said Graham. “It should be a yearly part of your healthcare starting when you’re young.”

Should she need treatment again, she is confident she’ll return to Markey.

“Dr. Marcinkowski is fantastic,” said Graham. “The Markey Cancer Center is the best and she was very knowledgeable, kind, compassionate and professional. All of their staff was phenomenal and everybody worked together as a team.”