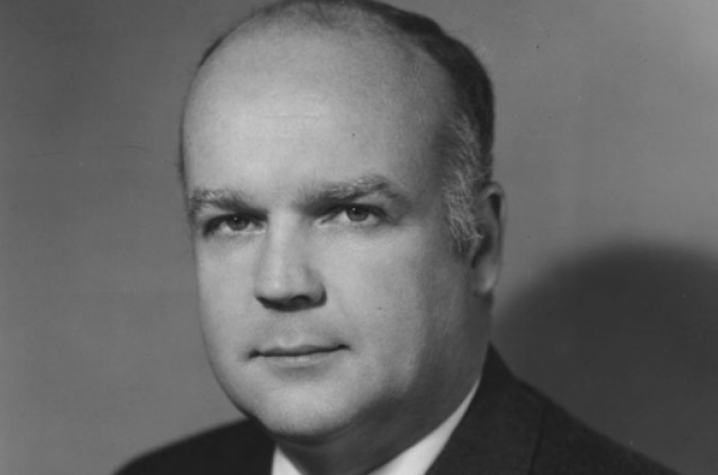 LEXINGTON, KY (Nov. 4, 2010) — Dr. Peter Bosomworth has been part of the tradition of the University of Kentucky Medical Center for more than 40 years. He came to UK in 1962 as the first chairman of the Department of Anesthesiology in the then-new UK College of Medicine. Recruited by Dr. William R. Willard, the medical center’s first vice president and dean of the College of Medicine, Bosomworth was the youngest department chairman in the United States.

Bosomworth provided leadership during a period of extraordinary growth for UK. As department chairman, Bosomworth quickly was able to recruit new residents for the residency training program, and establish the research program with all faculty members participating and publishing in peer review journals. This work was being recognized by the National Institutes of Health (NIH) and other research funding was growing.

Reflecting on colleagues and students, Bosomworth says, “Throughout my career, an area that has given me great pleasure is to see the personal and professional development of my colleagues and students. Seeing people reach new heights and experience the possibilities and rewards associated with their work is very satisfying to me.”

In 1967, Bosomworth was asked to serve as acting associate dean for clinical affairs in the UK College of Medicine, a position that became permanent in 1969. In 1970, Bosomoworth was appointed vice president for the UK Chandler Medical Center, a position which underwent a title change in 1982 to chancellor.

Under his leadership as vice president and chancellor, the medical center grew to include the five colleges: Medicine, Nursing, Dentistry, Pharmacy and Allied Health Professions (now the College of Health Sciences). In addition, Bosomworth saw the growth and establishment of the University of Kentucky Chandler Hospital and the Kentucky Clinic (originally named the Warren Wright Medical Plaza).

Throughout his tenure, Bosomworth remained steadfastly committed to quality patient care. His dedication has been evident in many ways, and notably through his personal interaction with medical students and residents promoting highly competent, attentive and compassionate care.

Upon his retirement as chancellor in 1994, Bosomworth was recognized as having the longest tenure of any top medical center administrator at a single academic institution in this country.

Over the years, Bosomworth studied the telemedicine concept extensively in the United States and Europe. As UK Chandler Medical Center’s chancellor emeritus, Bosomworth remained on the faculty in the College of Medicine for several years and served as a telemedicine consultant throughout the network partnership of Kentucky TeleCare and also continuing medical education.

"I knew Peter both as chair of anesthesiology and as chancellor of the UK Chandler Medical Center," said Dr. Emery A. Wilson, interim dean and director of the Office of Health Research and Development, UK College of Medicine. "He was insightful and honest, and he was an excellent example of leadership in that he was always interested in what was best for the medical center and not himself.  Look at the medical center today. If past is prologue, we all owe a great deal to the leadership of Peter Bosomworth."

In 2001, a new research center was named the Peter P. Bosomworth Health Sciences Research Building to honor and recognize him as chancellor emeritus.

"Peter Bosomworth was an extraordinary leader," said Dr. David Nash, the William R. Willard Professor of Dental Education, UK College of Dentistry, and former dean, UK College of Dentistry. "In a quiet, unassuming manner he provided visionary leadership for our Medical Center.  A person of impeccable character, his touchstone was always what was best for patients, health professions’ students, and the citizens of Kentucky. His thoughtful leadership provided the foundation that UK’s academic health center is continuing to be built upon today.”

Bosomworth was appointed as one of the original members of the Kentucky Institute of Medicine, an early member of the Foundation for a Healthy Kentucky, and is an honorary member of the UK Sanders-Brown Center on Aging Foundation board, as well as many others. In addition, he served as chairman of the board for the Association of Academic Health Centers (AAHC).  He also invested time as a visiting professor and consultant in many universities in the United States and countries around the world including Canada, Taiwan, China, England, Norway and Ecuador. Bosomworth not only lived this commitment to helping others professionally, but also personally, as he and his wife, Jody, invited more than 25 young people into their home to study from all over the world.

Bosomworth's leadership has been characterized by his colleagues across the country as that of integrity and insight. Those who know him say he led by example, selected good leaders to join the medical center team, and found ways to help good people do good things while achieving the medical center’s many goals.

The Bosomworths have three living children, and one son who is deceased. They have eight grandchildren.