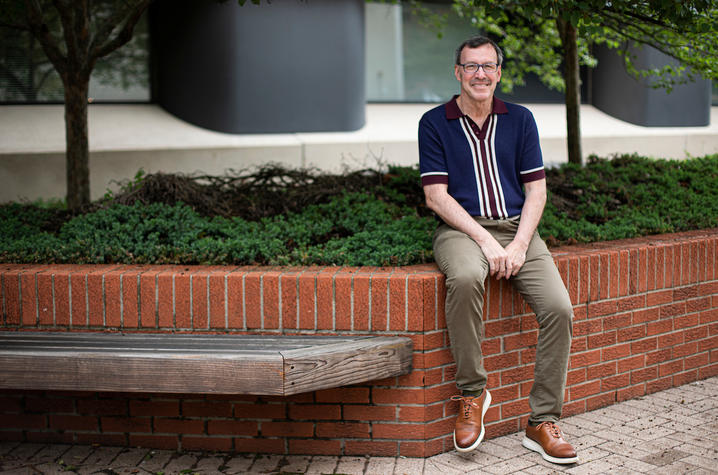 Paul Johnson is grateful to say those words, but says his new mindset is taking some getting used to — after all, he initially thought his cancer diagnosis was a death sentence.

“What do you do, you know? It’s very surreal,” Johnson said. “When they told me I had cancer, all I could think is that I was going to die.”

Johnson’s cancer journey started in the spring of 2021.

Though he had experienced acid reflux for years, he never thought much of it. After mentioning his symptoms during a routine doctor appointment, to which his physician suggested he may have gastroesophageal reflux disease (GERD). GERD happens when stomach acid and juices move back up into your esophagus, the tube that leads from the throat to the stomach. This can cause heartburn, ulcers, and pain and swelling in your esophagus.

Johnson managed his symptoms with over-the-counter medicine and went about his life, only occasionally crippled by persistent heartburn.

But in April of 2021, Johnson found himself choking more often while eating. That annoying heartburn turned into intense chest pain. He called his primary care physician who suggested he visit the emergency department.

“It got so bad that I — albeit reluctantly — went to the emergency department to make sure I wasn’t having a heart attack,” he said.

Johnson was referred to a gastroenterologist at the Lexington VA Healthcare System for follow up. After an upper endoscopy, Johnson learned he had a cancerous tumor in his esophagus.

Diagnosed with stage II adenocarcinoma of the gastroesophageal (GE) junction, Johnson’s mind was racing, and he and his husband had plenty of questions. His first appointment was with Clinton Morgan, M.D., Ph.D., a UK HealthCare thoracic surgeon and section chief of cardiothoracic surgery at the Lexington VA Hospital, who specializes in treating lung and esophageal cancer. Together, they decided to proceed with chemoradiation treatment before pursuing surgery.

With no spread or further development of Johnson’s tumor, he was set to start his chemotherapy regimen with Roger Fleischman, M.D., Ph.D., a hematological oncologist with the University of Kentucky Markey Cancer Center and section chief of hematology/oncology at the Lexington VA Hospital, and radiation with Ronald McGarry, M.D., Ph.D., a radiation oncologist at Markey.

“I could not have asked for better people to meet during the beginning of this whole process,” Johnson said. “They were patient and answered each of my questions thoroughly and with compassion.”

Johnson says he tolerated chemo well but recovering from surgery was more of a challenge.

“I had to relearn how to eat after being on a feeding tube for six weeks,” he said. “Surgery is a whole different journey in and of itself, but I could not have asked for a better team.”

He admits the surgery forced him to slow down — in a good way. He says his cancer journey has been transformative.

“This experience has slowed me down from the race I was on in life,” he said. “Especially after my tumor removal surgery, I actually had more time to reflect on and appreciate the family that I have left and my 27-year relationship with my husband. It taught me to have patience — that this is a marathon, not a sprint."

Johnson learned that having a support system is essential, and he hopes to expand his support network with a group of other cancer survivors.

“We already have at least one thing in common,” Johnson said. “Forging new friendships with others who can relate to you on a deeper level is powerful.”

Johnson, and other cancer survivors, patients and caregivers will have the opportunity to celebrate National Cancer Survivors Day with the UK Markey Cancer Center this week, at the Expressions of Courage event on Friday, June 3.

The event will be held at the Longship Club at Kroger Field from 10:30 a.m.-2p.m. Georgetown native Coach A.W. Hamilton, the head men’s basketball coach at Eastern Kentucky University and stage II melanoma survivor, will give the keynote address.

Nearly one year after his cancer journey began, Johnson looks forward to the future.

“I don’t think it dawned on me until very recently that I am actually cancer-free,” Johnson said.

He hopes his story will encourage others who may be experiencing similar symptoms to ask questions and seek further opinions, as there are no standard or routine screenings tests for esophageal cancer.

Most of all, he encourages those who may be at the start of their cancer journey to try their best to stay positive, and to seek assistance if they find themselves struggling.

“From the very beginning, it was important to me that I keep a good spirit,” Johnson said. “That’s my nature. My family jokes a lot, sort of as a way of shielding ourselves, I think. Staying positive certainly helped me during this phase of my life. Remember, we are not statistics. We are warriors and survivors.”