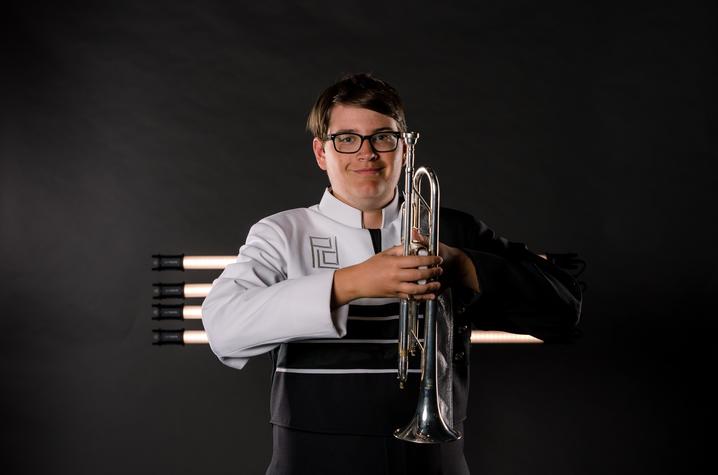 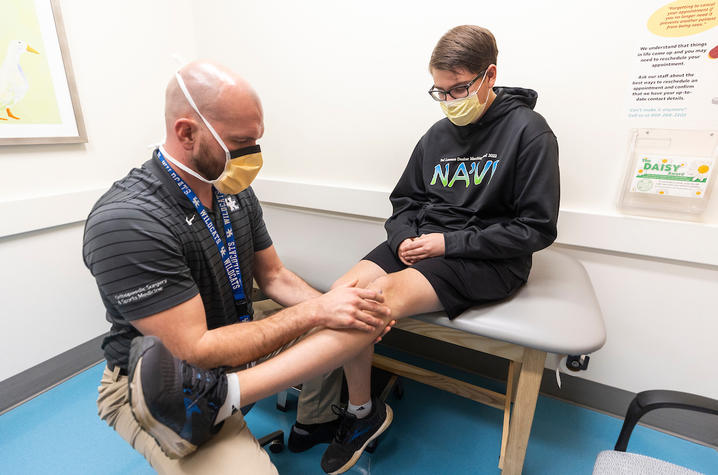 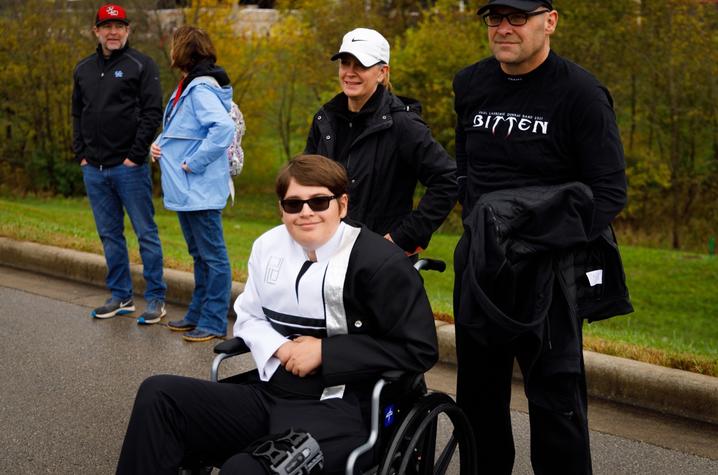 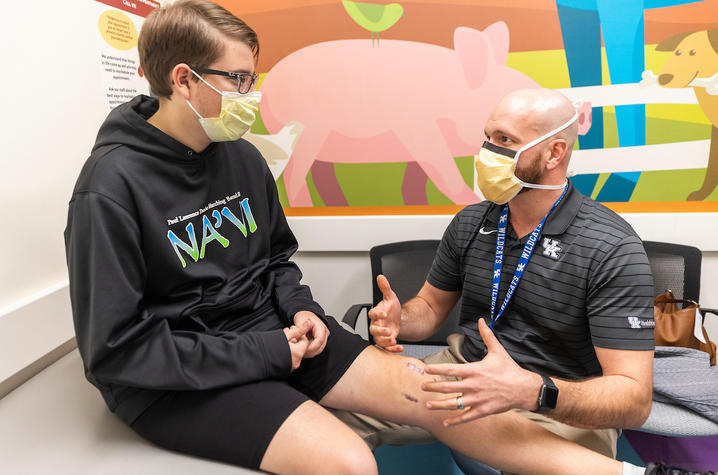 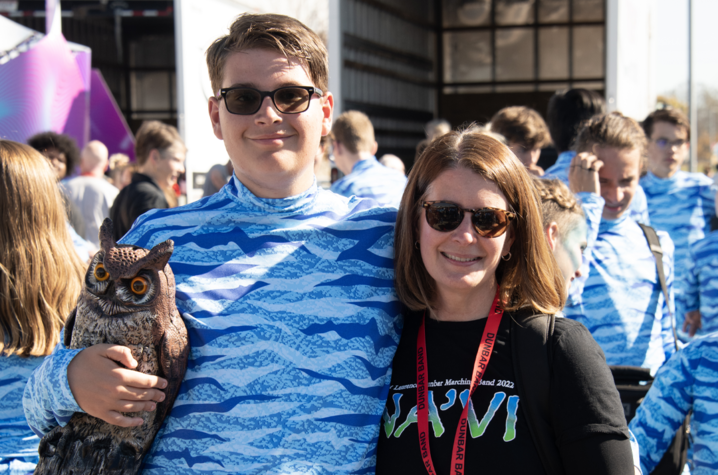 LEXINGTON, Ky. (Jan. 5, 2023) — It was October 2021 when 15-year-old high school student Michael Martorano was out on the practice field with the Paul Laurence Dunbar High School Marching Band cleaning up some sets before the band headed to a local band competition, which was taking place later that afternoon.

An hour and a half into practice and during the middle of a show run, Michael lunged with his left foot into the next set. He felt a sudden “pop,” in his knee, and fell straight to the ground.

“I thought, ‘Did I break my knee?’” Michael said. “In marching band, the show must go on, so everyone around me kept going. Once the set was over, my band director came over to see what was wrong.”

Michael, who has been playing trumpet since the fifth grade, asked a parent chaperone to grab his mom, who thankfully was at the school helping other parents load uniforms onto their trailer.

“When I got a call that my 15-year-old fell down and was asking for his mom, I knew it had to be bad,” said Michael’s mom, Viki Martorano. “When I saw him, I recognized how much pain he was in and decided to take him to our local urgent care where they did an X-ray.”

The X-ray determined that his knee wasn’t broken, but something wasn’t right. The urgent care physician decided to order an MRI, and they were going to take the results to the UK Orthopaedic Surgery and Sports Medicine Walk-In Clinic at Turfland, to have an orthopaedic doctor check him out.

“The urgent care doctor put an immobilizer on his leg to support Michael in the meantime, but there was only one thing he was thinking about — the competition,” Viki said. “So, since we had to wait two days for the MRI anyway, we went to the competition where Michael had to watch his band perform from the sideline.”

In marching band, students work tirelessly for months memorizing music, movements, and perfecting sets in preparation for a seven-to-nine-minute performance at competition. Like traditional sports, marching arts requires a lot of physical stamina and mental acuity. Every single player contributes to the greater whole. In marching band, even when one person is missing – a show can be seriously altered. Every man counts.

“I was very disappointed that I couldn’t be on the field with my band,” Michael said. “We had worked so hard for months to compete, so it was frustrating to have to watch from the sideline.”

“Dr. Hosey at the walk-in clinic saw the MRI results and recommended that we get a referral to Shriners Hospital,” Viki said. “So, they coordinated to have us see Dr. Wilson the next day.”

“I saw Michael on Oct. 6 of last year and saw that he had not only dislocated his patella, but the patella had knocked a section of weight bearing cartilage off of his femur bone as well,” Wilson said. “I knew we had to get him back to surgery quickly, because the longer we wait, the harder it will be to fix. We saw him again later that week for essentially a two-in-one surgery on his knee.”

Dislocation of the patella, or the kneecap, is one of the most common knee injuries in the adolescent patient population. Wilson said he sees this happen to children and young adults all the time. However, bone and cartilage injuries as Michael had, are much more unusual, but are far more significant for the long-term health of the knee joint.

“When I looked at his knee, I noticed this piece of cartilage was about an inch long, half inch wide,” Wilson said. “It is certainly quite uncommon for this to happen, and Michael’s is probably the largest piece I’ve ever seen come off in practice myself.”

If left untreated, Michael could have had serious complications and could have developed early arthritis in his knee.

“We don’t need to be seeing arthritis in a 16-year-old,” Wilson said. “So, we went in and cleaned up the spot where the cartilage came from and repaired it back into place with absorbable tacks. Then, I reconstructed his kneecap ligament with a donor tendon so we could ensure it wouldn’t come out of place again.”

Even after this type of injury, up to 50% of patients end up dislocating their patella again. The cadaver tendon will help prevent this from happening for Michael.

“After the surgery, Michael had six weeks of non-weight bearing time,” Viki said. “We had physical therapy at the Turfland clinic.”

Michael was facing a month-and-a-half of time in a wheelchair and crutches, due to requiring his leg be completely non-weight-bearing to allow time for the cartilage repair to heal. This meant he had to sit out the rest of the marching season, while in recovery.

“I was sad that I couldn’t march the rest of the season, because the last three weeks is preparing for KMEA Marching Band State Finals competition,” Michael said. “But thankfully they were still able to incorporate me into the show. Just in a different way.”

Rather than marching trumpet on the field, Michael worked with his band directors to learn synthesizer so he could still play the show but with the front ensemble instead.

“His dad and I would wheel him and his synthesizer onto the field,” Viki said. “Michael became responsible for some of the special effects in the show. So, he was able to stay with the band in a different capacity. His band directors were so nice in being flexible enough to still include him.”

“I really liked learning something new,” Michael said. “It was different, and I really missed marching trumpet with my section. But I still had a lot of fun, and it was better than missing out on the show entirely.”

While Michael had to put in the work learning a completely new instrument, he also had to start putting in the work to get himself back to walking — all with the goal of being able to march again the next season.

“We started physical therapy the Monday after surgery,” Michael said. “We were working with the therapist all the way up until June. It was nine brutal months.”

“Rehabilitation after surgery is both physically and mentally taxing,” Jurjans said. “Fortunately, Michael had a lot of the key ingredients for a good recovery after his operation, including having surgery in a timely manner with an excellent surgeon like Dr. Wilson, a strong support system at home, and a good work ethic. I am sure he did not like having to come to physical therapy for all those months, but Michael always gave his best.”

A month before the marching season began this year, Michael was cleared by Wilson and Jurjans to head back to the field for his junior year.

“I was really excited to get back to marching this season,” Michael said. “I was a co-trumpet section leader this year, which was really important to me. I was so excited for the theme of this year’s show and was selected for a trumpet solo. So, I knew this was going to be a great season.”

Dunbar’s 2022 marching show was titled, “Na’Vi,” themed after the "Avatar" movie franchise. The band placed fourth in the state this year, among placing in first and second place at two other competitions as well.

Marching band has become such an important part of Michael’s high school experience, that it was critical he get back onto the field.

“Knowing that I was going to be able to march in this new show was so important to me,” Michael said. “Ever since my eighth grade year, I knew that this — music — was what I wanted to do. It is the one thing that keeps me going through all the challenges high school brings.”

Viki said she was so impressed to see her son be so resilient through this entire journey.

“As a parent it was hard to see my kid go through something like this,” Viki said. “Michael’s older brother and sister both marched with the Dunbar band, so he was well-versed and excited for his time to come. And when he had a sudden stop to everything, we could see it was hard on him emotionally. We were impressed with his endurance going from marching to surgery, to changing instruments and taking on physical therapy. He continued to press on because he loves this band so much.”

Michael is now back to his full range of activities with no restrictions. In the future, he won’t have to take any certain precautions, and will be able to live a normal life.

“Sometimes I get a little nervous about re-injuring my knee or injuring something else,” Michael said. “I have had a couple more falls during practice, but now everyone just looks over at me and waits for me to bounce back and give my two thumbs up so they know I’m good.”

“His young age makes my job look easy,” Wilson said. “His recovery was great. He is a kid that’s very well-grounded, and he’s got a good head on his shoulders. You could tell exactly how hard he was really working the entire time, during a very difficult recovery process with a lot of long hours. I think Michael and his great attitude, his hard work, and John’s expertise with the therapy is really what made this surgery so successful.”

“I split my practice equally between UK HealthCare and Shriners,” Wilson said. “The interconnectedness and teamwork between these two enterprises makes my job easy. We all have a great working relationship together and it allows us to truly provide the quickest and best care to patients who really need that, like Michael.”

Michael is so thankful for the care UK HealthCare and Shriners provided him. It has truly allowed him to return to what he loves and finish off high school happily and healthily — marching on the field like he was meant to be.

“I would like to thank UK HealthCare and Shriners for the work they did to get me back to marching band,” Michael said. “I had a lot of fear about what was wrong with my knee when I went to the walk-in clinic, but once they told me that I would see a specialist at Shriners Hospital the next day, I knew I was going to be in good hands. Dr. Wilson talked with me that first day about my injuries, surgery and recovery, and he knew how important it was for me to get back out on the marching band field again. Working with John during my rehab was challenging, but he encouraged me during every visit to keep working hard so I could reach my goal.”