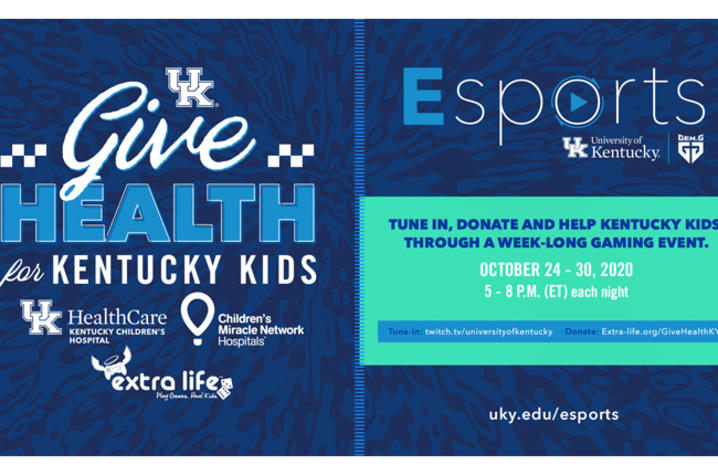 LEXINGTON, Ky. (Oct. 13, 2020) – Today, Gen.G and the University of Kentucky announced the two will join forces for “Give Health for Kentucky Kids'' as part of their ongoing partnership. The program with Kentucky Children’s Hospital (KCH), Children’s Miracle Network, and Extra Life aims to provide patients with a sense of community and freedom through virtual gaming events both within the hospital walls and with the greater esports/gaming community. Patients will have the opportunity to compete in special events, play a variety of provided games with family and friends, and connect with the larger gaming community while bringing awareness and fundraising opportunities to the hospital.

The program kicks off on Saturday, Oct. 24 with a seven-day fundraising streamathon on Twitch that will feature patients, UK athletes, Gen.G pros Maddiesuun & Tinares, content creators Pathra, Krystalogy, Raynday, Samito and a local Kentucky game developer Super Soul. In addition, Gen.G will be matching up to $5,000 in donations for the duration of the streamathon.

The program will reach across various gaming titles for inclusivity and will include:

In addition, Gen.G and UK will also be launching various esports and gaming programming this fall for the UK community. Programs include the Hoops At Home Qualifiers, finding the best NBA2K players amongst the UK community to compete in Hoops At Home in the Spring; the Virtual Governor’s Cup, engaging the Louisville/UK rivalry in a series of game titles; and the UK Invitational Tournament, a tournament amongst numerous schools to compete for top prizes.

“It’s been less than a year since we set out to engage the entire Big Blue community through games,” said Gen.G CEO Chris Park. “UK has already created several compelling programs for gamers, but none is more important than this commitment to play for good on behalf of Kentucky Children’s Hospital, Children’s Miracle Network, and Extra Life.”

“We’re excited Gen. G. is bringing this virtual gaming experience to our patients,” said Dr. Scottie B. Day, physician-in-chief for Kentucky Children’s Hospital. “Because of the pandemic and our visitor restrictions, it’s more important than ever that our patients feel part of a community and engage with fellow gamers. We can’t thank Gen. G, Children’s Miracle Network and Extra Life enough for their support.”

The Gen.G Foundation and UK are partnering to identify the inaugural Gen 10 class - a group of 10 students from all over the country that will receive a $10K scholarship that will be awarded in December. Students can apply at https://geng.gg/pages/foundation with applications closing Oct. 15.  The fund will be used to support diverse students enrolled in a US university or college who are interested in majoring in gaming, esports, entrepreneurship, journalism or content creation.

Click here for information on how to participate and donate.

Established in 2017, Gen.G is the only major organization that owns and operates top teams in South Korea, the United States, and China. Ranked no. 6 in the inaugural Forbes list of the “World's Most Valuable Esports Companies,” Gen.G's core mission is to help fans and athletes use the power of gaming and esports to get ahead in and beyond the competition. The company has quickly become a commercial and thought leader, building a global, inclusive and cross-cultural future for sports entertainment.

United under #TigerNation, Gen.G boasts seven global championships to date among their competitive teams which include the Seoul Dynasty franchise of the Overwatch League, the LCK world champion team in South Korea, the world's top all-female Fortnite team, PUBG, CS:GO, Valorant and the NBA 2K League's historic expansion franchise in Shanghai.  Its widely acclaimed initiatives include #TeamBumble, the leading team platform for the empowerment of women in gaming, and the Gen.G Elite Esports Academy, the world's first fully-integrated academic esports program in Seoul. More information about Gen.G esports and its teams can be found at this link.

Kentucky Children's Hospital, part of UK HealthCare, is committed to providing the best care possible, for children as well as families. With the region's only Level I pediatric trauma center and Level IV neonatal intensive care unit, more than 30 advanced subspecialty programs such as pediatric oncology and pediatric surgery and nationally ranked by the U.S. News and World Report in both pediatric heart care and orthopedics, KCH is equipped to provide the highest level of care to young patients, close to home.