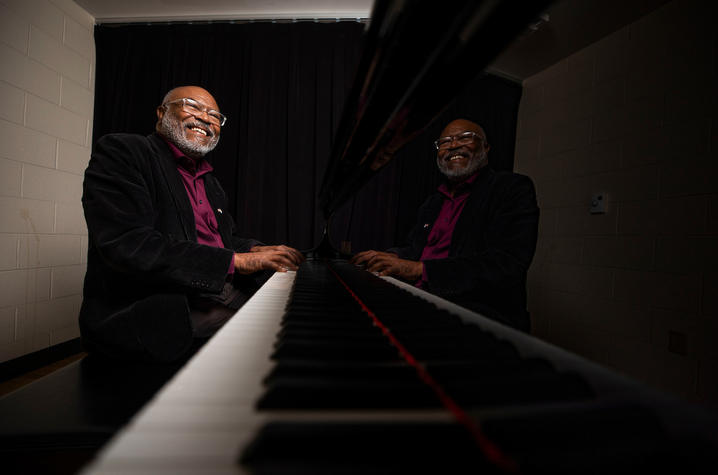 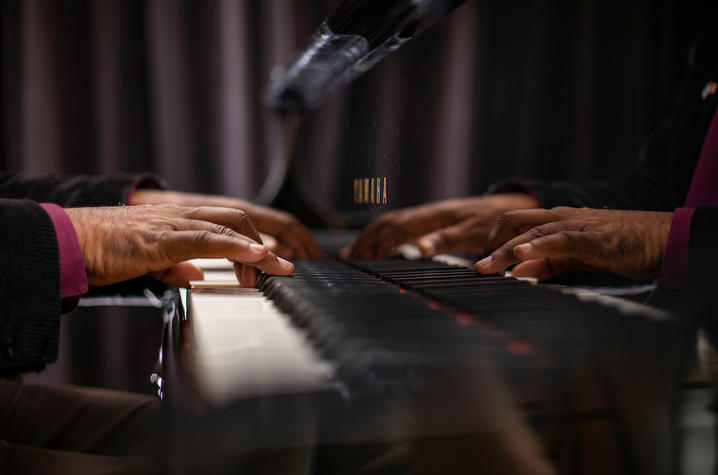 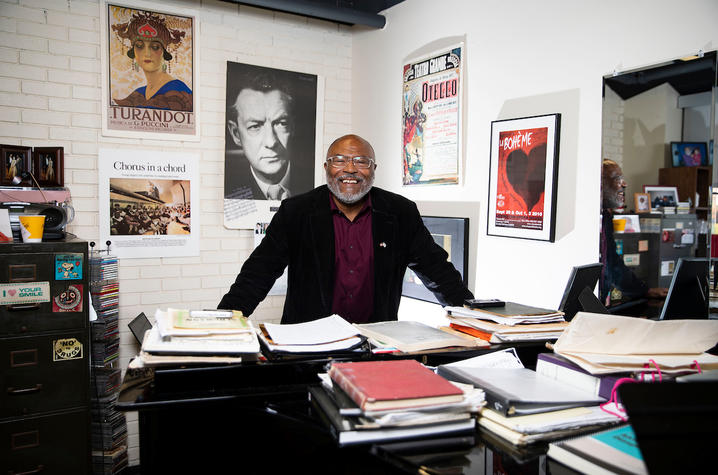 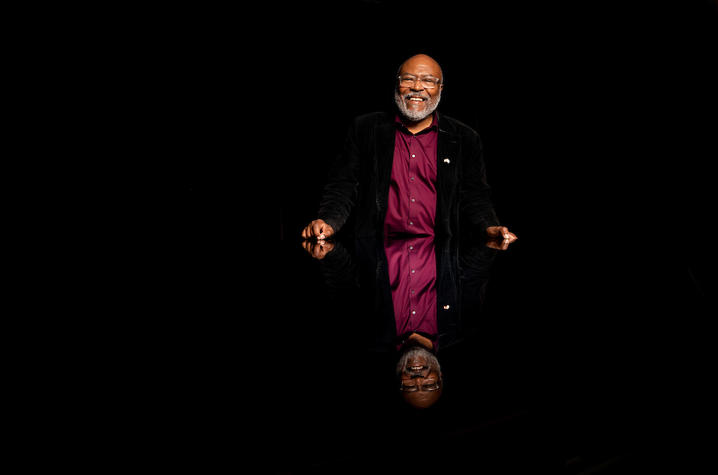 LEXINGTON, Ky. (Dec. 9, 2021) — When you walk into Cliff Jackson’s office, there’s a good chance you will find him tucked in the back corner — sitting behind his sleek, black baby grand piano, sifting through stacked piles of sheet music and music scores.

The stark white, brick-lined walls are sprinkled with colorful playbills and concert posters, detailing some of Jackson’s favorite musical memories.

“There are so many to choose from,” Jackson said, with a laugh.

Though you may not be able to see him sitting behind the stacks of books at first, you can feel Jackson’s presence as soon as you walk into the room. He exudes confidence and charm with such ease that you feel instantly comfortable. It’s no wonder he has found such success as a musical collaborator.

Jackson is a world-renowned pianist and vocal coach, accompanying artists like Kathleen Battle, Renata Scotto and Edda Moser. His decades-long career includes an outstanding repertoire of achievements, with performances on the national and international stages of Carnegie Hall, the Kennedy Center, the Royal Opera House and the Vienna Musikverein, to name a few. His journey brought him to the University of Kentucky in 1992 as a vocal coach for the UK Opera Theatre and an associate professor in the UK College of Fine Arts School of Music.

Jackson’s reputation as one of the best in the business has a humble beginning. At just 5 years old, he would sit in the little back bedroom of his family’s home in Gary, Indiana, playing the piano for hours.

It was his creative escape. He caught on quickly, learning to play the piano by ear.

“That’s how my mom learned to play,” Jackson said. “There is only so much you can show someone by ear, so I just had to pick things up and start to experiment.”

Growing up in Gary — a town known for its famous musicians, like the Jackson family and Deniece Williams — he was surrounded by musical influences. He found two of his greatest musical mentors at church.

“The church organist and the preacher’s wife, who was also the choir director, were fine musicians,” Jackson said. “I took piano lessons with them almost every day.”

Jackson says he learned so much from them, in music and life, especially after his father died when Jackson was 14.

“After my father died, they were so supportive of me and my family,” Jackson said. “They were very respectful of my mother, who was a young widow at just 33 years old. She took us to church every Sunday and they recognized what a fine woman she was.”

Jackson’s love of music grew over the years. Despite his three sisters’ disinterest in playing, Jackson continued to evolve as an artist, and eventually went on to receive his bachelor’s degree from Oberlin Conservatory of Music before pursuing graduate studies at the Manhattan School of Music.

“I have always loved playing for singers more than playing the piano as a soloist,” Jackson said. “I have been at this for a long time, and it continues to make me happy every day.”

Perhaps that is why Jackson cannot stay away from the stage. Though he retired from UK in 2011, Jackson continues to teach as professor emeritus. But for the last year or so, Jackson worried his future of vocal coaching and accompanying may come to an end sooner than later.

Jackson had been experiencing numbness between his ring and pinky finger for about a year but hesitated to seek further treatment.

“I had not paid it a whole lot of attention, but my doctor warned me that I better do something about it if I wanted to keep playing the piano and have any normal use of my hand, period,” he said.

Jackson was referred to Maureen O’Shaughnessy, M.D., an assistant professor in the UK HealthCare Orthopaedic Surgery & Sports Medicine and a provider at the UK HealthCare Hand Center — the only comprehensive hand surgery service in Kentucky.

After a physical exam, Jackson underwent a nerve conduction study to evaluate the electrical signal that the nerve conducts across different parts of the arm. This test helps to pinpoint where the compression is happening.

The test showed that the muscle pain between Jackson’s first finger and thumb was coming from a compressed nerve in his elbow. Jackson was ultimately diagnosed with cubital tunnel syndrome.

Stretching from the neck to the hand, the ulnar nerve transports nerve signals to the little finger and half of the ring finger, and it also helps control movement and grip strength in the hand. The ulnar nerve passes through several choke points in the arm, one of which is the cubital tunnel, a shaft of tissue on the inside of the elbow. There, with little cushioning as it passes beneath a knob of bone called the medial epicondyle, the nerve is vulnerable to compression. That can cause pain the elbow, and numbness or tingling in the hand.

Different from carpal tunnel syndrome, the condition is not as common or immediately recognized.

“People will have tingling or loss of sensation in the hand as well as difficulty with fine motor activities,” O’Shaughnessy said. “Depending on the severity and grade of the compression, we can start with physical therapy and splinting the elbow at night.

If that doesn’t work, or if the compression is more severe, surgery is a next step to decompress the nerve.

O’Shaughnessy said the condition can get progressively worse, and if you leave a nerve compressed for too long, it can result in permanent nerve damage.

It typically takes about a year after surgery for the nerve to fully recover, but O’Shaughnessy said patients who keep up with their physical therapy will see major improvement after three or four months.

Luckily for Jackson, who ended up having surgery on both of his hands, playing piano is the perfect form of physical therapy.

“Performing artists, especially musicians, have a very unique need for use of their hands and arms,” O’Shaughnessy said. “As a surgeon, I enjoy working with them because they care so much about their body and their art. It is a privilege for me to help them reach their full potential.”

Jackson is getting stronger every day, something he — and his students — are thankful for.

“I was afraid starting the semester that I may not be able to play, but I am able to function, and I am grateful for that,” Jackson said. “There is no stopping me now!”