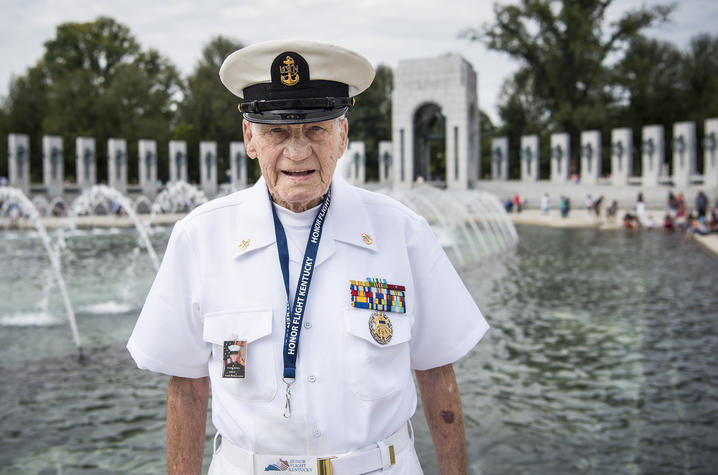 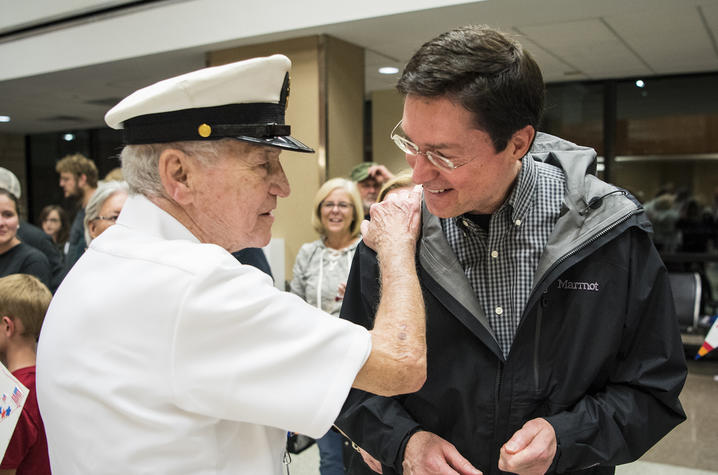 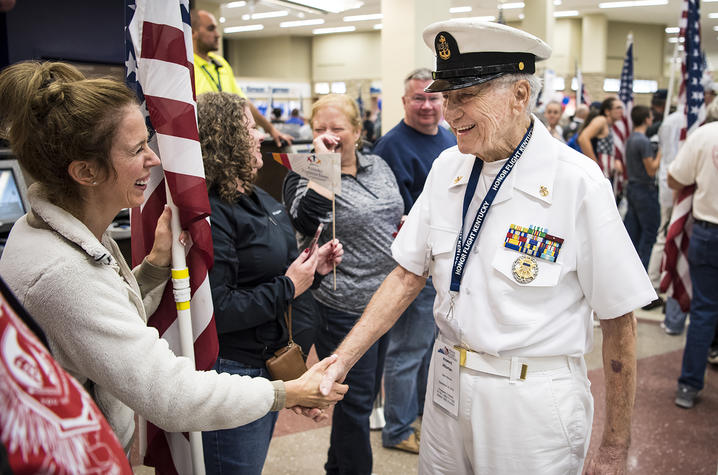 LEXINGTON, Ky. (Oct. 1, 2018) — Howard Hitsman has seen a lot in his 84 years. As a Chief Petty Officer for the U.S. Navy, Hitsman served the Joint Chiefs of Staff aboard the USS Northampton — also known as "The Floating White House" — during the Cuban Missile Crisis. He met President John F. Kennedy ("Twice," he says with a twinkle. "And JFK remembered me the second time.") When President Lyndon B. Johnson traveled to Uruguay for the Punta del Este Meeting of American Chiefs of State, Hitsman and his Battle Staff Team 1 was there to provide hospital and communications support. He was also the last sailor to retire from the USS Intrepid when it was "mothballed" in 1974.

For extraordinary service to his country, Hitsman was awarded a slew of medals, as evidenced by the rows and rows of bars across the chest of his uniform. Though he retired from the Navy long before many of his nurses were born, he stands straight as an arrow and still looks every bit the officer, taking command of each room he enters with an infectious energy, passing out donuts and handshakes to the staff at UK HealthCare's Gill Heart & Vascular Institute (GHVI) as his daughter Tracy smiles and shakes her head.

"Nothing can slow him down," she says.  "I'm glad that Gary (her brother) is the one taking Dad to Washington!"

The reference to Washington was Hitsman's next great adventure, and his visit to the UK HealthCare Clinic on Sept. 10 was the last hurdle to prepare him for that adventure. On Sept. 22, Hitsman accompanied 68 other war veterans to Washington D.C. as part of an Honor Flight sponsored by Kentucky's Touchstone Energy Cooperatives. He was able to go because just a few weeks before, the his medical team at Gill Heart & Vascular Institute gave him a new aortic valve.

Hitsman had known he had a heart murmur for years, but a year ago he noticed increasing shortness of breath and fatigue. "I had no stamina," Hitsman says. "I couldn't even make it to the mailbox without needing to rest."

A visit to his doctor, and then to Dr. Rick McClure at the Gill Heart Outreach Clinic in Rockcastle County, rendered a double diagnosis:  Hitsman had an abnormal heart rhythm called atrial fibrillation (Afib) and a heart valve problem called aortic stenosis. Hitsman was advised not to travel until his valve could be replaced.

In February, Dr. Yousef Darrat used a therapeutic dose of electricity to restore Hitsman's heart to a normal rhythm, correcting his Afib. Hitsman was then referred to Dr. John Gurley, who replaced Hitsman's aortic valve using a special procedure called Transcatheter Aortic Valve Replacement (TAVR), which uses catheters inserted through two small incisions in the groin to guide a replacement valve into place.  The procedure eliminates the need for open heart surgery, which means a faster recovery with fewer side effects.

"I noticed a big difference pretty quick," he said.  Tracy makes a wry face, tilting her head towards her father as if to say, "in case you couldn't tell, he's doing much better." Everyone in the room laughs, including Hitsman, who then presses Tootsie Rolls into the hands of anyone who refused a donut.

Dr. Gurley arrives with good news: an echocardiogram confirmed that Hitsman's new valve was functioning properly and he was cleared to go to Washington. Hitsman, all smiles, flashes the thumbs up sign to his daughter, who calls him a "National Treasure" with tears in her eyes.

Gurley, himself the son of a World War II Navy veteran, has profound respect for Howard and was delighted to be part of the team that returned Howard to good health.

"I used to sit for hours listening to the stories my dad told about the war, about what they went through," Gurley said. "It was a pretty big commitment these guys made, and they deserve our respect."

So, on Sept. 22, Hitsman and his fellow veterans flew from Lexington to Washington D.C., for a full day of honors and sightseeing, including the changing of the guard ceremony at the Tomb of the Unknown Soldier in Arlington National Cemetery and visits to the World War II, Korean War and Vietnam War Memorials.

In his dress whites, Hitsman was the star of the show — "shaking hands and kissing babies," said one bystander. He was saluted by U.S. Marines, who recognized the photo badge he wore honoring his nephew, a fellow Marine killed in Afghanistan two years ago, and his bus drove past the gravesite of the U.S. president who had twice thanked him for his work during the Cuban Missile Crisis.

"I met veterans from so many other states, and while some of the places we visited were very emotional for me, it was humbling to be there," he said.

Capping off the day was a homecoming celebration upon the Honor Flight's return to Lexington. When the plane touched down at Blue Grass Airport, about a thousand people were there to welcome the travelers home with flags, signs and applause. As the vets walked through a phalanx of cheering men, women and children in the terminal, they received a welcome that some of them had never experienced upon their return from war decades ago.

Howard had two additional surprises waiting for him: his oldest son and granddaughter had driven down from Cincinnati to be part of the homecoming celebration.  And Dr. Gurley, his doctor and now friend, also came to thank him for his service.

"It was a truly wonderful and emotional experience," Hitsman said. "I just wish my wife was alive to share it with me."

Dr. Gurley was given a photo of Howard talking to a group of young people at the World War II Memorial. The youth lean in keenly, clearly entertained by his story. Gurley looks at the photo and smiles.

"It sounds hokey, but it was truly an honor to help Howard be ready to complete his mission: to give the next generation the privilege of knowing someone who was actually there, doing good work for our country."