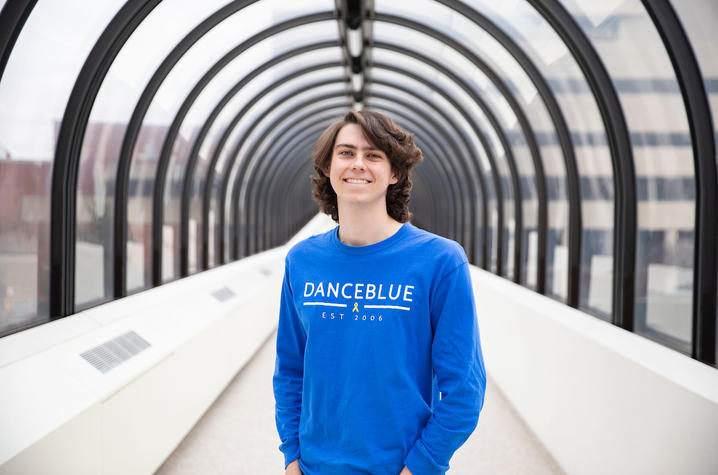 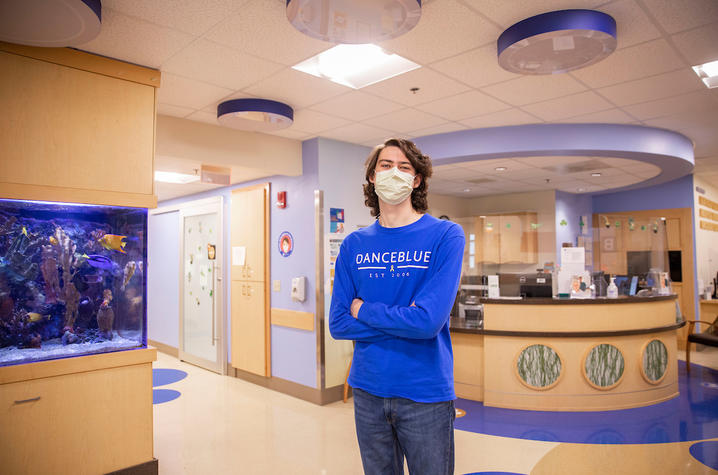 LEXINGTON, Ky. (March 3, 2022) — Johnny Kirkpatrick came to the University of Kentucky from Paducah in 2019 expecting what most students do – a fresh start. He was ready to make new friends and have new experiences. He never imagined facing college and a cancer diagnosis all at once.

Kirkpatrick came to UK because “it was the best school in the state,” and his older brother was in pharmacy school at the time. At the beginning of his first semester, he was doing well in class while pursuing a chemical engineering degree in the UK College of Engineering and familiarizing himself with his new home. He even joined the UK Men’s Club Soccer team.

“Around early October my health started to decline,” said Kirkpatrick. “I was tired all the time, lost my appetite and whenever I tried to do anything active, especially play soccer, I would just throw up.”

After a couple of weeks of denial, his brother encouraged him to make an appointment at University Health Service. There, he was tested for infectious mononucleosis, commonly known as mono, but had inconclusive results. They did blood testing but ended up sending him home with some medicine for his symptoms. It wasn’t until later that night – when he received a call from the UK's hematology/oncology department telling him to go straight to the UK Albert B. Chandler Hospital Emergency Department (ED) – that he began to panic. On Nov. 4, 2019, Kirkpatrick was told he had leukemia.

“I was in shock; this was never something I thought would happen to me,” said Kirkpatrick. “The full weight of the news didn’t hit me until later. The first time I cried was when I told my friends; admitting it finally made it real for me.”

In the days following, Kirkpatrick’s parents came to Lexington to be with their sons and see how they could help. They soon met with professionals from the University of Kentucky Markey Cancer Center and Kentucky Children's Hospital. Tom Badgett, M.D., Ph.D., was assigned to Kirkpatrick’s case, and swiftly made the family feel more at ease.

“I vividly remember Dr. Badgett telling me this was, ‘treatable and beatable,’ and it was the first good news I heard since being in the ED,” said Kirkpatrick. “It was then and there that I became a DanceBlue patient.”

DanceBlue is a student organization at UK born from a little boy's dream. Jarrett Mynear, who had been diagnosed with cancer several times before the age of 13, understood how scary it was to be a kid in a hospital. From there, Jarrett’s Joy Cart was born.

Mynear would walk around the children’s hospital offering kids toys from his cart. More than just giving gifts, that small young man was spreading what is so difficult to come by in the children’s hospital – joy. He passed away in October 2002, but not without leaving a legacy. He told his parents there was still more he wanted to do to help kids with cancer. His mother, Jennifer, set out to fulfill Jarrett's wishes, and from that spark, DanceBlue was born.

DanceBlue has now existed on UK’s campus for 17 years. Students involved fundraise all year long in hopes of participating in the 24-hour no-sitting, no-sleeping dance marathon. All the proceeds go to the DanceBlue Kentucky Children’s Hospital Hematology/Oncology Clinic.

After meeting Dr. Badgett, Kirkpatrick realized the importance of DanceBlue’s support. The next few months were some of the hardest of his life. He stayed in the hospital for almost the entire month of November. He lost 30 pounds, including a lot of muscle, making him extremely weak. His medications were making his face swell and causing him to feel even sicker.

After leaving the hospital, he spent most of his time in an apartment with his mother. He was advised to stay in Lexington to be close to his providers, so his father would travel from Paducah to see them on the weekends.

“This time was very difficult for me,” said Kirkpatrick. “I struggled to get around, even walking up the stairs was completely exhausting. Any day I didn’t throw up was a good day, and there weren’t very many good days. Life like that continued until early April when I returned to Paducah and began to commute for treatments.”

Feeling the warmth of the sun that summer and being with his parents made Kirkpatrick hopeful that he was improving. As the leaves began to fall, so did his spirits – he was back for a hospital stay in Lexington due to fever and nausea.

“That was when I finally lost my hair,” said Kirkpatrick.

He was released from the hospital and was able to spend the holidays with his family. He continued to rest and listen to the guidance of his providers at the DanceBlue Clinic. With their skilled assessment and a whole lot of hope, Kirkpatrick was healthy enough to return to UK for the 2021 spring semester. He made it through his first semester back with no major issues, even earning himself a spot on UK's Dean’s List.

After a summer full of safe exercise and strength-building, Kirkpatrick was back on the UK Men’s Club Soccer Team by the fall of 2021.

“While it wasn’t easy, and I’m still on the road to recovery, I was incredibly proud of myself — and Dr. Badgett was too,” said Kirkpatrick. “I was finally feeling like myself again, for the first time since I got sick.”

This semester, Kirkpatrick was able to help create the UK Men’s Club Soccer DanceBlue team. This will be the team’s first-ever DanceBlue marathon, and they have already secured the No. 1 fundraising spot for a new team. He plans to stand for himself and the other clinic patients at this weekend’s marathon.

“Even though I’ve been through so much, there are so many kids in the clinic who are younger and less fortunate than me,” said Kirkpatrick. “I’m so proud to get involved with DanceBlue this semester and contribute what I can.”

To support Johnny and all the students this weekend, donations are still being accepted at DanceBlue.org. DanceBlue 2022 will take place at Memorial Coliseum from 8 p.m., March 5 until 8 p.m., March 6, but will only be open to the public from 5 to 8 p.m. on March 6.