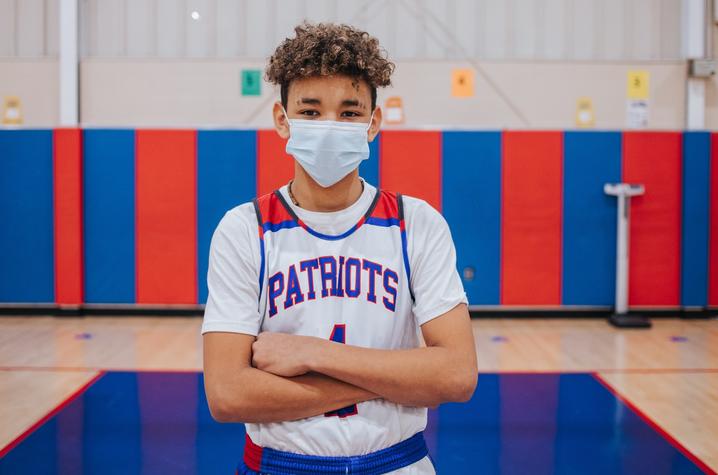 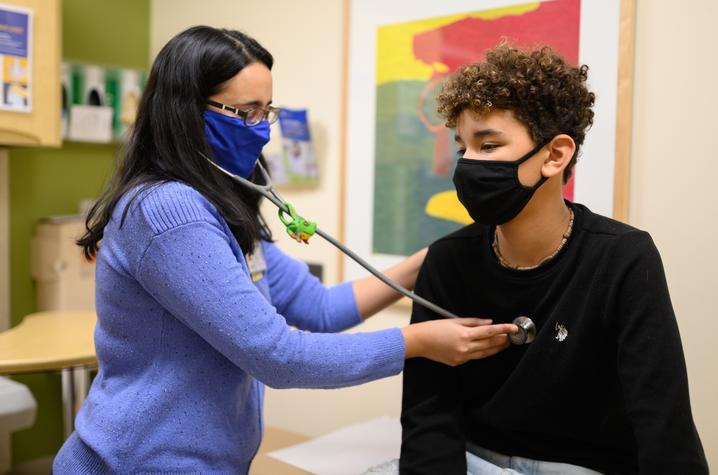 “They were just wrestling around, and he comes running in the house, holding his chest and saying his head was hurting,” said his mom, Samantha Coleman.

His mother tried to get him to calm down and breathe slowly — and eventually he did. But AJ and Coleman started to notice a pattern: any pressure on AJ’s chest would lead to difficulty breathing. He was diagnosed with asthma and was given an inhaler to use. He had been using the inhaler for about a month before realizing it was not helping his symptoms.

“During football practice I got hit in the chest, not even that hard, and it just took my breath,” said AJ. “I took the inhaler and that just made me even more lightheaded.”

AJ went to the school nurse, who realized that his symptoms were not related to asthma at all.

“She said, ‘This is not asthma. He needs to go back (to the doctor),’” Coleman said. “She saved his life, basically.”

AJ’s doctor referred him to Kentucky Children’s Hospital, where he was placed under the care of Dr. Preeti Ramachandran. Ramachandran conducted multiple tests to see what was wrong with AJ’s heart. The results of a CT scan revealed anomalous coronary arteries, a birth defect that causes a person’s coronary arteries to be shaped abnormally. AJ's left coronary artery was coming off the right side of his heart, leading to a lack of oxygenated blood flow. This abnormality often leads to death if not caught.

“They said that if he would've played sports that year, he could have been one of those kids that just dropped on the field,” said Coleman.

AJ’s heart defect was luckily caught early and was able to be corrected with surgery. AJ underwent open-heart surgery in June of 2019. The surgeons opened up his coronary artery and made an incision in the wall of his heart, allowing them to move the artery to the correct location, restoring proper blood flow — and saving his life. After being released from the hospital, AJ could already feel a difference by his two-week follow-up appointment.

“He felt the difference in his heart. He could feel it pumping the flow," said Coleman. "That took him by surprise because he wasn't used to it pumping like it's supposed to.”

“I was like, 'It's not bothering me.' When I would get in a hot tub or showers, I couldn't face the water because it would take my breath," said AJ. "Then probably a month out, I started noticing that I could do all that stuff again.”

AJ was put on exercise restrictions for about six months post-surgery, for everything from gym class to playing football.

“Dr. Ramachandran told him to walk from the house to the car, that's all he could do. Just to get that exercise in,” said Coleman.

AJ was sad to miss out on playing football, and even thought he would never get to play again. Luckily, he was cleared after passing a routine stress test.

AJ was cleared to play football again and finished the season before moving on to play basketball, as well. In his free time, he enjoys hunting, fishing and participating in Civil War reenactments. He recently made quarterback of his football team.

“Half the time I forget I even had surgery, because I feel like normal people do just running around,” said AJ.

His mother is glad to be able to see her son thrive once again and hopes AJ’s story can bring awareness to potential heart problems, even in young, active kids.

“There needs to be more awareness because it happens to so many kids," Coleman said. "It should be part of a physical to have your heart checked. I was scared to death, but he did great. He really did.”

The Joint Heart Program is a collaboration between Kentucky Children’s Hospital and Cincinnati Children’s to provide families with local access to world-class cardiology care, close to home.