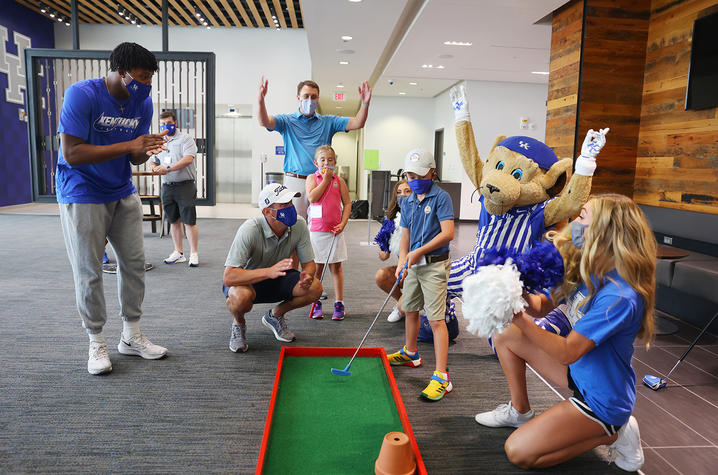 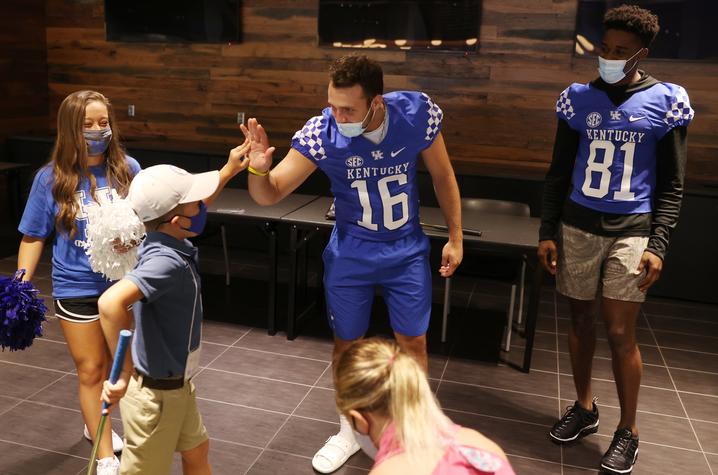 LEXINGTON, Ky. (July 14, 2021) ­— In what has become an annual tradition in association with the PGA Barbasol Championship played at the Keene Trace Golf Course in nearby Nicholasville, patients in Kentucky Children’s Hospital (KCH) teed off on a nine-hole course, coached by pro golfers from the tournament.

Because of COVID-19 visitor restrictions at hospital, this year’s mini pro-am took place at Kroger Field, where former patients and current outpatients tested their putt-putt skills on holes set up throughout the stadium. Assisted by volunteer “caddies,” the players worked their way through the course as it wound through the upper-level hospitality suites overlooking the field, the team room, coach Mark Stoops’ game day office and just outside the end zone. Cheering them along were PGA golfers Jim Herman, Ken Duke, Stephen Stallings Jr., John Pak, Will Grimmer, Case Cochran and Andrew Stephens, as well as UK coaches and student-athletes.

"My dad is also a professional golfer and played on the PGA tour," said pro golfer Case Cochran. "He won the state tournament in 1975, and I won it 2005. I learned about being a professional and what these events mean to people from him. He always let me know that it mattered, and that you could put so many smiles on people's faces, so that's why I was so eager to come here today and help out."

Rules and score keeping were relaxed as the kids worked through the nine-hole course that started in the Woodfood Reserve room. A day of rain meant that they couldn't continue the game on the football field, but there were still smiles all around as the pro golfers, football players, cheerleaders and dance team members celebrated every shot.

"It's a great opportunity to introduce kids to golf and a way to pay it forward to the community," said pro golfer Will Grimmer. When asked if he had any tips for the young golfers teeing off on the first hole, he had some sage advice: "Just have fun."

“While this year’s tournament looks a little different, we’re grateful to the PGA golfers for coming out and playing a round of golf with our patients, and to UK Athletics for the use of Kroger Field,” said Dr. Scottie B. Day, physician-in-chief at Kentucky Children’s Hospital. “We were unable to hold this event last year, but this year they brought it back and made it an unforgettable experience for our patients.”

Kentucky Children’s Hospital is one of the benefiting charities of the Barbasol PGA Championship being held July 15-18 at Champions at Keene Trace in Nicholasville. The tournament will broadcast live each day on Golf Channel and is one of only 45 regular-season tournaments before the FedEx Cup Playoffs. PGA Tour events generated more than $2.65 billion for charity, including more than $125,000 for Kentucky Children's Hospital.