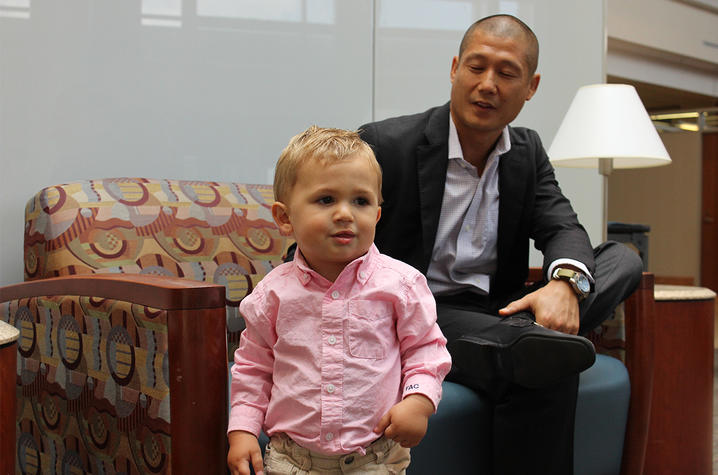 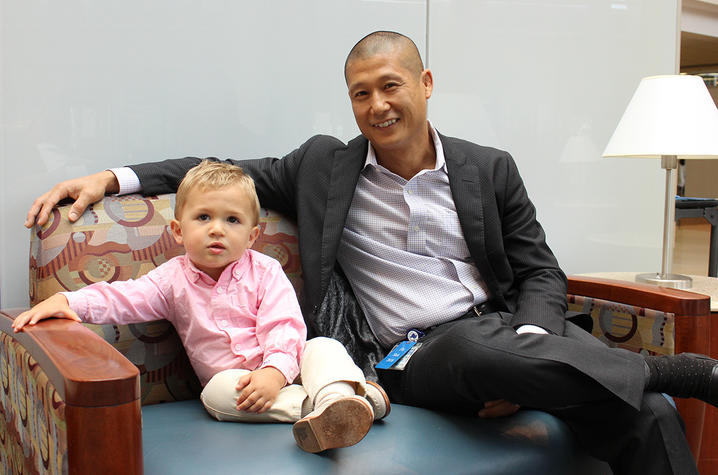 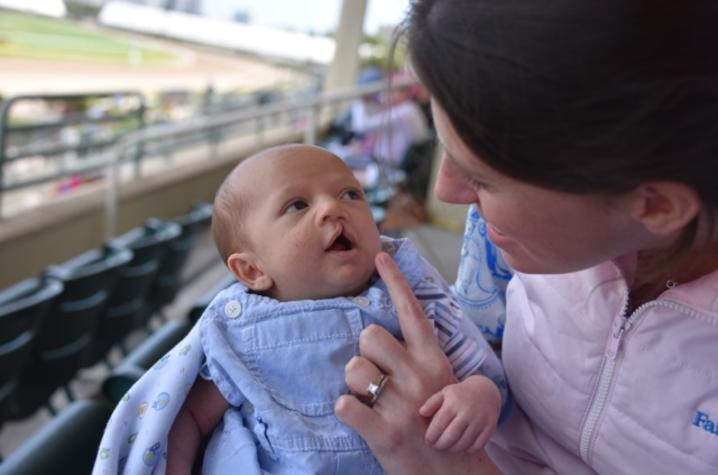 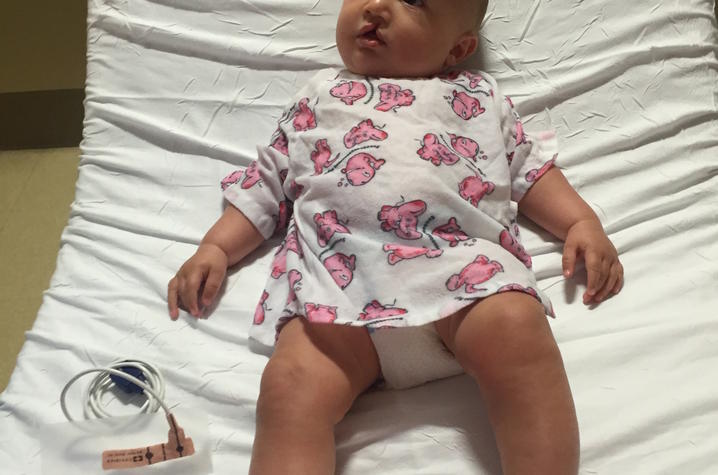 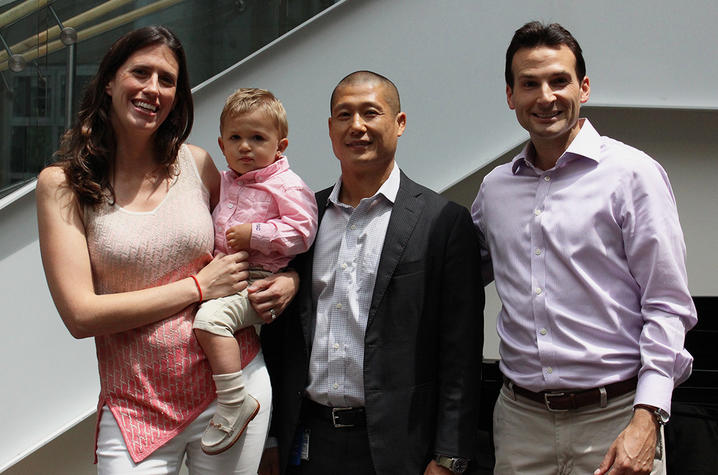 LEXINGTON, Ky. (June 28, 2017) — The 20-week ultrasound appointment privileges parents to a sneak-peek of their baby growing inside the womb.

During the scan, the ultrasound technician noticed a separation of tissue at the baby’s upper lip. The visual was enough for doctors to diagnose the Ciannello’s baby with a cleft lip and palate, which are birth defects of the lip and roof of the mouth that form early in infant development. Cleft lips and palates are the most common birth defects in the United States, occurring at a rate of about two in 1,000 births. More than 4,000 American babies are born with a cleft lip each year. In most cases, the defect is repaired early in a child’s life and they are able to live a normal and healthy life.

The diagnosis terrified Ciannello, who didn’t know where to turn for information about treatment and outcomes for babies with a cleft lip and palate. Because cleft lips are stigmatized in many cultures, including in American society, families remain silent about their child’s diagnosis, leaving other parents in the dark about how to respond to the diagnosis. The absence of a supportive local cleft care community was frightening for Anna Ciannello.

“We were devastated when we learned the news,” Ciannello said of the diagnosis. “I went into panic mode; I thought I had done something wrong. I was very sad and overwhelmed.”

Ciannello searched the Internet for information about cleft lips and palates, which only intensified her uncertainty and fears. Through a husband’s friend, she connected with another mom in New Jersey whose child was born with a cleft lip and palate. This mom encouraged Ciannello to relocate to Philadelphia for corrective surgeries. Hoping to stay close to family in Kentucky, the couple started calling plastic surgeons at major pediatric centers around the region. Ciannello said every surgeon on the list referred her to Kentucky Children’s Hospital pediatric plastic craniofacial surgeon Dr. James Liau.

Liau is an outspoken advocate for families seeking cleft care in the region, as well as around the world. Liau met with the Ciannello family before the baby’s delivery to explain the initial diagnosis and options for treatment, assuring them that with early surgical intervention, he could make the cleft lip and palate virtually disappear.

“It was exactly what we needed to hear,” Ciannello said. “I started getting more confidence, and I felt good about the decision.”

Francis, or “Frankie,” Ciannello was born in January 2016. On the night Frankie was born, Liau visited the family in their hospital room and conducted an assessment of Frankie’s cleft lip and palate. He believed Frankie’s case was manageable with a series of surgeries, and the first surgery to correct the cleft lip and repair his nose was scheduled when Frankie was six months old. A second follow-up surgery to correct the palate was scheduled six months after the first surgery. Frankie will have his next surgery when he is a little older so he gets a break for a few years.

Ciannello’s anxiety about her son’s appearance dissipated when she finally met him face-to-face. She realized Frankie’s appearance was not alarming or embarrassing, and his condition wasn’t a crisis, but an opportunity to challenge the ideal of “the perfect baby.” Frankie, an endearing and handsome baby, was perfect with his cleft lip. When Ciannello took her baby to the thoroughbred sales at Fasig-Tipton, co-workers, clients and members of the equine community all embraced Frankie’s appearance. Frankie traveled with his parents to nine racetracks across the country before his first birthday, and Anna said no one ever stared or acted rude to her baby. Most people complimented his precious smile and happy demeanor. Everyone was drawn to him.

“They said he should be a little model,” she said. I was so proud of how he looked. In fact, when Frankie was admitted for his first surgery in June 2016, Ciannello knew they would miss his distinctive lip and wide smile. The family grew accustomed to the cleft lip; it was an important part of Frankie’s journey. Instead of shielding her son from the world, Ciannello decided to share Frankie’s story on social media in hopes of offering comfort and guidance for families processing the diagnosis of prenatal cleft lip or palate. She posted photos of Frankie before and after his surgery and provided updates on his surgeries on a Facebook page. The outpouring of support was overwhelming. People called her and told her how they have loved following Frankie’s story and how it brings them to tears to see the photos and read about him.

“I just treated him like a normal baby,” Ciannello said. “I always wanted him to know I wasn’t embarrassed by him. I am so proud of him.”

Ciannello now consults with parents who come to Liau with a prenatal cleft lip or palate diagnosis. She guides them through some of the complications related to the baby’s care, such as where to access special bottles for cleft babies and how to make adjustments for breastfeeding or what to expect after each surgery. Most importantly, she wants parents to feel confident and excited about the birth of a beautiful baby that might not conform to societal standards. She and Liau are working together to create a network of cleft care families to support one another in the local community and reduce the stigma of cleft palates.

“I see a baby with a cleft, and I have this instant love for them,” Ciannello said. I have such a soft spot for these babies. They are so strong and have to go through so much at a young age.”

Recently, Ciannello saw a couple with a baby who had a cleft lip out in the community. She approached the couple to admire their baby, telling them their baby was very cute.

“They had so many questions for me.  I remember the mother saying, ‘I think God sent you to us.’ It is an emotional thing, but I know what they are going through.”

In addition to supporting local families, the Ciannellos organized “Frankie’s Fund” to support Liau’s mission work abroad. Using his vacation time, Liau takes two mission trips a year to Ecuador and Guatemala to repair cleft palates and lips in third-world communities lacking medical resources. In September, Liau travels to Ecuador to volunteer as a surgeon for the Global Smiles medical mission. During these 10-day visits, hundreds of parents line up with children for evaluation, and surgeons accept about 40 of the most drastic cases for surgical repair. In the winter, Liau volunteers on a Children of the Americas mission trip, performing four to five surgeries a day on children in need of corrective surgery. Each trip, with the medical costs for the surgeries, adds up to about $75,000.

While a cleft diagnosis isn’t necessarily life threatening to a person in the United States, if left untreated the conditions can lead to life-long impediments for people in third-world countries. The stigma is more severe for someone living in Central America, and individuals with cleft palates are ostracized for the condition. They also can cause speech defects, have eating issues and severe infections can lead to deafness. Liau believes he has an obligation to take his surgical skills to pockets of the world where surgical care is not easily accessible to children.

“We offer a lot of services to Kentucky, but in the same regard we have the ability to take it further to these other countries where they have no option,” Liau said. “There is no safety net for them.”

The Ciannellos are grateful for the care they receive from Liau, who has become more than their son’s surgeon, but a friend and outreach partner. “We can’t stress enough that not only is Dr. Liau an amazing surgeon, but he is also a wonderful person. He has such a kind and gentle way with children, and he always knows how to calm us nervous parents down during the entire process.”  Anna Ciannello didn’t want to lose the image of how her baby looked with his cleft lip, so she has lots of photos as reminders. Another reminder is the subtle scar on Frankie’s upper lip, an edgy trademark that sets him apart from other toddlers.

“I always tell my husband, ‘Don’t you love how he’s a little different?’” Anna Ciannello said of the scar.

Last year, Frankie’s Fund raise more than $15,000 to support Liau’s work in Ecuador.  To give to Frankie’s Fund, visit https://www.classy.org/fundraise?fcid=896091.