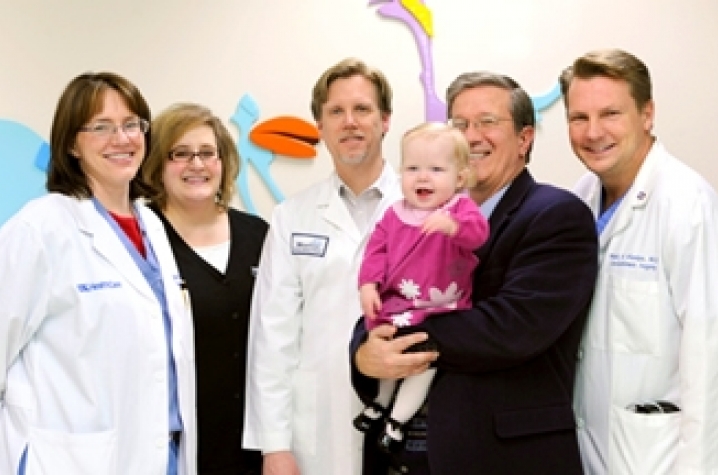 LEXINGTON, Ky. (Feb. 24. 2010) — Kerrington was born Jan. 20, 2009, to Sam and Christy Johnson. Just moments after her birth, Kerrington was diagnosed as having Tetralogy of Fallot, a group of congenital heart defects, and absent pulmonary valve syndrome, a rare heart defect.

Kerrington was immediately transported to the Pediatric Intensive Care Unit at Kentucky Children’s Hospital. She was released six days later with her prognosis. The cause of her disease was unknown.

"What we could be certain of was numerous heart surgeries were in Kerrington’s future and the longer that we could wait, the greater her chance of survival," Christy Johnson said.

Sam and Christy learned the cause of Kerrington’s disease at her next follow-up appointment with the Kentucky Children's Hospital pediatric cardiologist, Dr. Tim Bricker. Kerrington had tested positive for DiGeorge Syndrome, a genetic disorder with varying conditions including heart defects and an immune deficiency.

“Kerrington is a beautiful baby with a very complicated medical situation," said Bricker, who is also professor and chair of the Department of Pediatrics at the University of Kentucky College of Medicine and physician-in-chief of Kentucky Children's Hospital.

The months that followed consisted of numerous appointments with various doctors, such as geneticists and immunologists, along with a series of tests.

"During the first months of Kerrington’s life, we were confined to home because of her immune deficiency and the fear of her coming in contact with illnesses that would weaken her heart," she said.

She also had to deal with acid reflux, chronic cough, breathing difficulties and thrashing around as if in severe pain. In May, she was admitted to Kentucky Children’s Hospital for seven days for failure to thrive. In September, it was decided that it was in Kerrington’s best interest to move forward with her first major open heart surgery.

“It was definitely the right time for her to undergo surgery for complete repair of her heart defects," said Dr. Mark Plunkett, the Frank C. Spencer Associate Professor and chief of cardiothoracic surgery, UK College of Medicine. Plunkett also is director of pediatric and congenital heart surgery as well as co-director of the Kentucky Children's Heart Center.

Surgery was performed at Kentucky Children’s Hospital on October 14. After a five-hour surgery, Kerrington was taken to the PICU where she stayed for seven days. She was discharged from the hospital two days later with the understanding that her new heart valve would last three to five years.

The Johnson family lives in Lancaster, Ky.  They have two other daughters: Ally, 11, and Miley, 2.

"Due to the knowledge and excellent care of the doctors and nursing staff at Kentucky Children’s Hospital, Kerrington is now home, growing and getting stronger every day," Christy Johnson says. "While we’re encouraged by the progress we see each day, we continue to take this journey one step at a time."

The Johnson family wants to help others, so they established Kerrington's Heart, a non-profit organization that provides education and assistance to families and children affected by congenital heart disease. Kerrington's Heart, Inc. was organized by parents and loved ones to promote congenital heart disease awareness and provide a reliable support system for children with heart disease, their parents, and caregivers. Several fundraisers are in the works.

"Kerrington's Heart highlights the importance of a comprehensive and experienced heart program," Bricker said. "More than that, Kerrington’s Heart represents a family and a community dedicated to providing the best for our heart defect children in every way. Kerrington’s Heart also represents one of the most delightful one-year olds you will ever meet.”