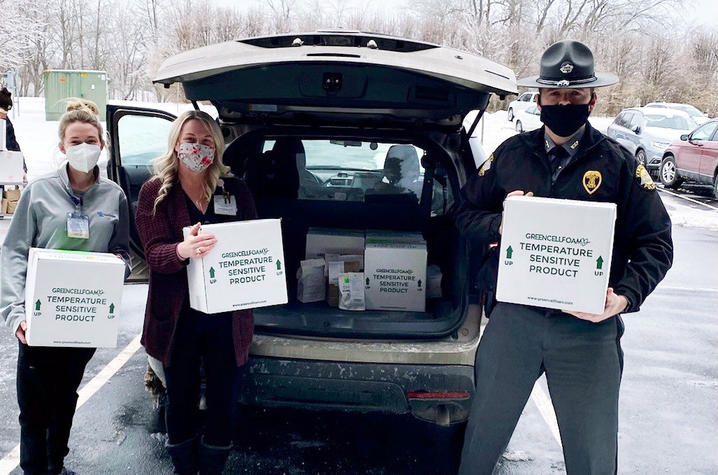 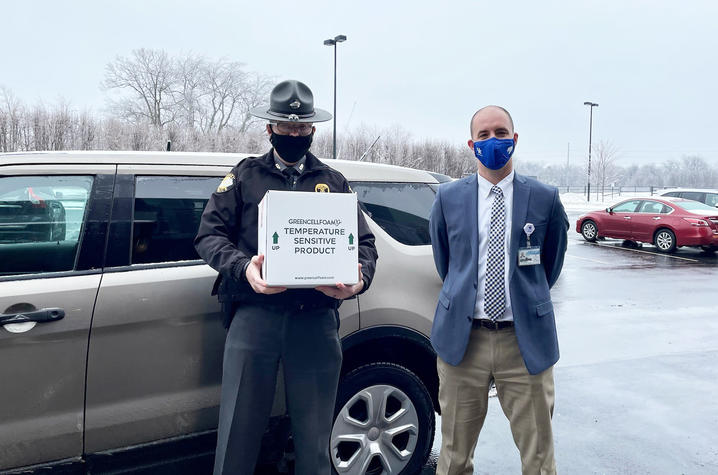 The pharmacy ships more than 3,500 packages of medication a month to patients in all parts of Kentucky as well as to contiguous states. Many of those medications have to be kept at specific temperatures, so it’s especially important that they not be delayed during shipping.

“Our patients with serious illnesses literally depend on their medications for their lives,” said Debbie Duckworth, senior director of Specialty Pharmacy and Infusion Services for UK Pharmacy Services, a division of UK HealthCare.

So when ice and snow made many Kentucky roads impassable in February, delivery trucks stopped running or were delayed, and the pharmacy needed help making sure its patients got the medicines they needed.

That’s when the Kentucky State Police stepped in to help.

“These troopers are true heroes,” said Duckworth. “They risked their safety to deliver medications to patients who had no other way of getting them.”

Trooper Stuart Jackson out of Post 12 in Frankfort helped organize the effort, making sure 20 different medications made it to UK Specialty Pharmacy patients over the course of the week by relaying to other troopers at outlying posts. He also took some on his own to Berea/Richmond area as he drove home after his shift.

UK Specialty Pharmacy patient Melissa Williams, who lives in Cumberland in Harlan County, Kentucky, was sitting on her porch waiting for the trooper who brought her medicine.

Williams has cystic fibrosis and depends on custom-compounded breathing treatments.

“When he pulled up, I was just, like, ‘Oh my God, this is lovely,’” Williams said. “Because I had no other way to get it. It was very, very sweet of them to do it, and I thank God that they did because I have to have it.

“It was just amazing to me. And I really, really appreciate it. I told him, I appreciate him so much.”

“We really could not have served these patients without their help,” said Duckworth. “Some of these individuals would have surely been hospitalized or experienced serious health consequences had they not received their medications.

“The troopers made the coordination of this effort really easy on us, and they were so pleasant and helpful,” she said.

“When UPS, FedEx, and couriers could not get through, the Kentucky State Police stepped up and came through for our patients,” said Philip Almeter, chief pharmacist for UK HealthCare. “We greatly appreciate their help.”

Added Duckworth: “We are so grateful that we have these individuals within our Commonwealth that are dedicated to helping people and truly sacrifice for the benefit of others. We can’t thank them enough.”