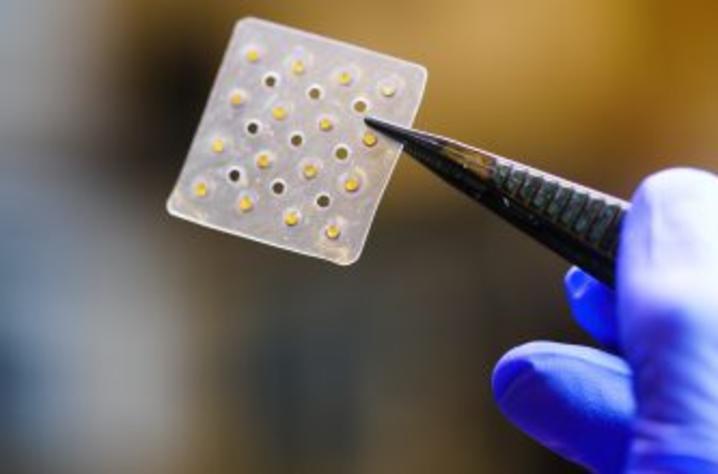 This procedure involved surgical resection of the ovarian tumor followed by implementation of a CivaSheet (pictured above).

LEXINGTON, Ky. (Sept. 19, 2017) ­– Physicians at the University of Kentucky Markey Cancer Center are the first to perform a unique procedure to treat a rare and persistent type of ovarian cancer.

For nearly three decades, the patient who underwent the procedure has been living with a rare type of slow-growing ovarian cancer. Multiple rounds of chemotherapy and radiation failed to stop the disease. Prior to this procedure, she had undergone four previous surgeries at both a local community hospital and Markey to remove as much of the tumor as possible every few years as it grew back. Because of the location of the cancer, surgeons have only been able to safely resect about 90 percent of the tumor.

"This cancer is tricky to treat, because it is prone to recur but grows slowly," Baldwin said. "That makes it relatively resistant to chemotherapy, which attacks fast-growing cells. Surgery is usually the best option, but each additional surgery becomes riskier for the patient."

Before deciding to offer yet another tumor resection as an option to the patient, Baldwin sought help from Markey's weekly multidisciplinary tumor conference to see if oncology experts in other fields had any ideas. Feddock, who specializes in brachytherapy – a form of radiation that involves using internal implants to disseminate radiation – suggested they try combining the surgery with an implantation of the CivaSheet.

The CivaSheet is a highly flexible membrane embedded with radioactive palladium. After Baldwin resected the tumor, Feddock sewed the CivaSheet directly to the remaining cancerous area. The radiation seeds are capped with gold on one side, so they provide direct, localized radiation to the area where the tumor has been growing back while sparing the other surrounding tissue from damage.

While the procedure may not cure the patient of her cancer, the hope is that the CivaSheet will inhibit the cancer's growth, allowing many more symptom-free years to pass before the patient may need further treatment.

Because of the tumor's slow-growing nature, Baldwin says it will take some time before they know how effective the procedure is, but she is hopeful about the outcome.

"This treatment has potential to offer control of this cancer for patients who don't have any other options," Baldwin said. "We're hoping to add both quantity and quality of life for a patient in a difficult scenario."

This is the first known instance of using the CivaSheet for ovarian cancer, but the device is used for other indications, including some gynecological, colorectal, head and neck, and pancreatic cancers as well as soft tissue sarcomas.