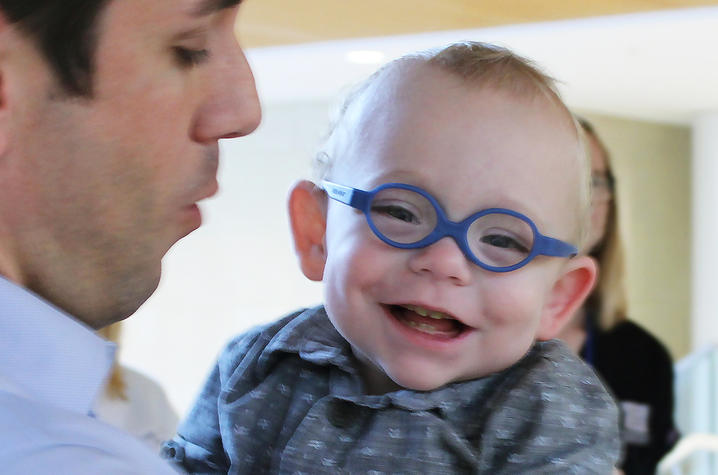 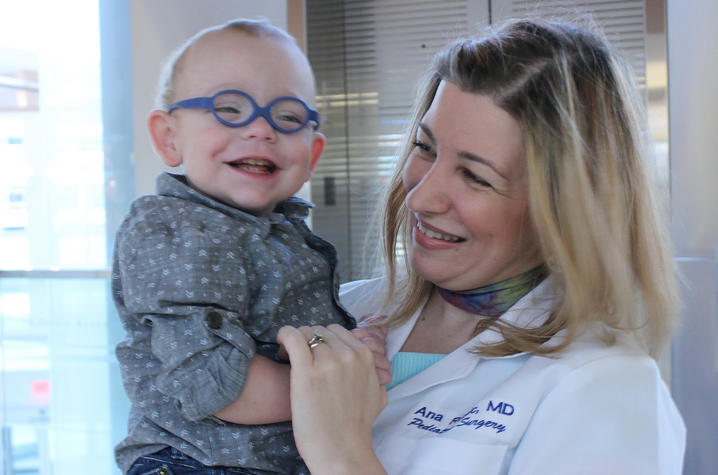 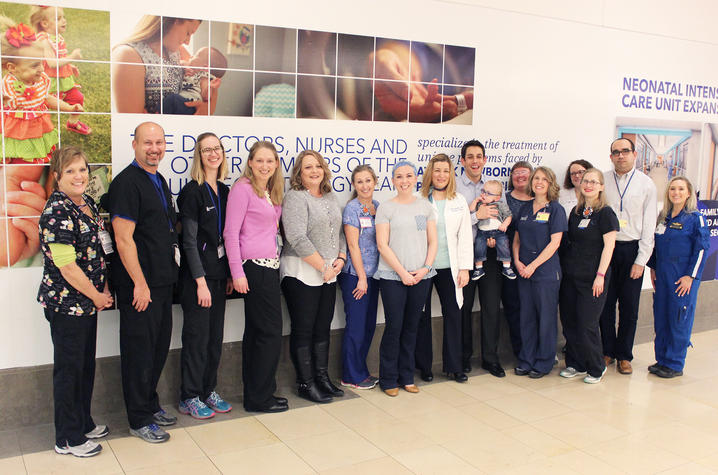 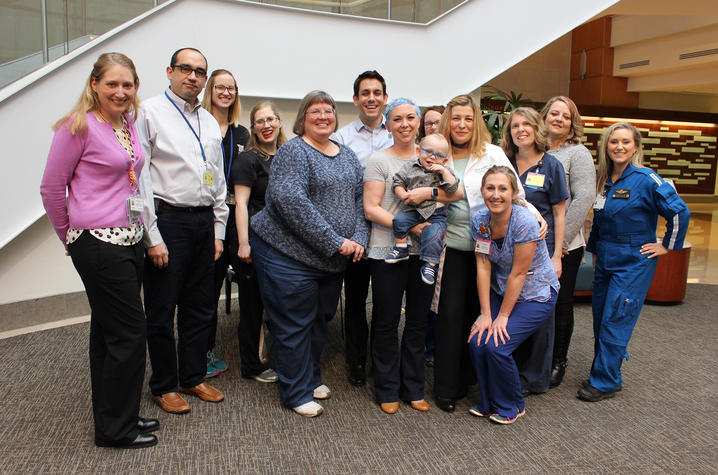 The four pediatric surgeons, nine surgical residents, 11 neonatologists, 15 neonatal nurses, and a multitude of therapists, transport nurses, and other support staff who crossed paths with the Stacy family, will always remember Connor, bundled in his mother’s arms, bound for home in the oversized “elf” hat.

The hat symbolized hope and the story of a baby who defied medical statistics. Even with advanced medical care, more than half of all babies diagnosed with Connor’s condition never go home with their families.

Last month, pediatric surgeon Dr. Ana Ruzic, who served as Connor’s primary surgeon, received a recent picture of Connor wearing his elf hat. This time, the knit hat fit snug around his head, and the baby’s mouth gaped wide open with a smile. A year after leaving the hospital, Connor was growing, laughing, babbling his first words and attempting his first wobbly steps. These milestones were difficult to imagine when Ruzic first consulted with parents Chrissy and Dustin Stacy in August 2015, bringing the news that Connor’s condition required emergency surgery.

“Along with my colleagues in neonatology and surgery, I carry the privilege and the burden of meeting NICU families on a sudden, unexpected, very bad day,” Ruzic said “And on the day I met him, Connor went from well to critically ill in a matter of hours.”

Chrissy and Dustin Stacy were still processing the shock of their first child’s sudden birth. At 27 weeks into a normal pregnancy, Chrissy Stacy planned to see her obstetrician on the morning of July 15, 2015. After a restful sleep, she woke up to her water breaking at 7:30 a.m., initiating intense labor. Fourteen minutes later, with her husband on the phone with emergency responders, Chrissy delivered Connor onto the bathroom floor.

EMS workers brought Connor to the KCH NICU where he received respiratory support and appeared to stabilize within a couple days. But Connor’s abrupt and dramatic arrival was the first complication in a six-month marathon of critical care treatment and surgical intervention at KCH. After breathing and eating normally one morning, his health plummeted to the point of multiple organ failure within a few hours.

Connor suffered from an underlying condition called necrotizing enterocolitis, an infection that starts in the intestine and is common in premature babies. More than half of premature babies diagnosed with severe-grade necrotizing enterocolitis succumb to the disease. Ruzic and an interdisciplinary medical team launched an aggressive treatment program to keep Connor alive. As a first step, Ruzic surgically removed the damaged bowel in a baby weighing only 1,200 grams.

Because of Connor’s fragile state, Ruzic scheduled the surgery in the NICU to avoid transporting him throughout the hospital. The entire unit remained shut down until the conclusion of Connor’s first surgery, which resulted in the removal of 50 percent of his small intestines. Many children who lose a significant portion of bowel during this procedure deal with the long-term gastrointestinal complication of short gut syndrome.

In the next five days, Connor underwent three more operations to address the problem in his bowel. In the midst of these surgeries, his kidneys, which eliminate toxins in the body, started to fail, posing another imminent threat to his life. Dialysis supports the body when renal failure occurs, but effective dialysis is difficult in babies Connor’s size. When renal failure occurred, the medical team reached a stalemate. At Connor’s bedside, Dr. Aftab Chisti, a nephrologist, told the family they needed a miracle for Connor.

“He said, ‘You need to pray for a miracle — pray for his medical team,’” Chrissy said. “And that was exceptionally hard to hear. It’s not that I don’t believe in miracles, but it’s hard to believe in that kind of miracle in this world.”

Even when the effort seemed hopeless, the surgical team improvised to sustain Connor’s life. Ruzic, Chisti and Dr. John Draus collaborated on an inventive technique to provide dialysis, ultimately supporting the kidneys for two weeks until spontaneous recovery of renal function. During this time, Connor’s nurses administered manual dialysis through this system every 10 to 30 minutes during their 12-hour shifts. Ruzic said the collaboration among many colleagues and professionals was essential for these aggressive approaches to give Connor a chance.

“Above all, we had to rely on faith in each other,” Ruzic said. “We do not always agree, and that is exactly what Connor needed – for us to challenge one another, our biases and our previous outcomes. This is also the story of true multidisciplinary medicine, which takes the impossible and makes it the standard of care.”

A miracle didn’t happen overnight, but with the success of the kidney support system, Connor showed gradual improvement in small steps. Within a few weeks, Connor’s organs rebounded, renal function resumed and the swelling in his body went down. Even after his disease was resolved, Connor experienced other close calls, such as infections and a sudden drop in heart rate. For the next several months, Connor remained in the NICU, learning to feed again, allowing his body to repair, weaning off of a breathing ventilator and receiving follow-up operations. The medical team and family set a new goal of getting Connor home before the Christmas holiday. On Dec. 23, Connor was released from the hospital in his elf hat, meeting that deadline.

“We felt like we had been blessed with another miracle,” Chrissy Stacy said.

Ruzic said Connor’s story inspired hope throughout the NICU. She believes a collaborative team-based approach combined with unwavering faith in the patient helped return Connor to good health. Borrowing a motto from colleague and mentor Dr. Joseph Iocono, Ruzic presses forward with medical care until she is no longer doing treatments for the patient, but doing treatments to the patient. Knowing many children are still lost to Connor’s disease, Ruzic said seeing one child go home healthy instilled hope in members of the entire pediatric unit.

“Those of us who take care of neonates carry within us a healthy dose of realism, which we drown with cautious optimism every time we walk into the hospital,” Ruzic said.  Hope is that intangible quality of pediatric physicians. It is our guiding light, held brighter by the courage of our little patients and their families.”

An ultrasound last summer showed Connor’s kidneys were functioning normally. His bowel repaired, so he won't suffer any lasting effects from short gut syndrome. Since his marathon of treatment, Connor has developed into a happy toddler with an infectious laugh. He plays peek-a-boo, looks at books, throws balls and, if his parent’s don’t keep close watch, splashes in the dog’s water bowl.

Chrissy and Dustin Stacy appreciated the frankness and compassion of their health care team, as well as their commitment to aggressive approaches and adapting to conditions when unexpected roadblocks arose. Ruzic and Iocono’s ideology of doing treatments for the patient — and not to the patient — resonated with the family. Although the team held discussions of the possible need for palliative care instead of aggressive treatment, time and time again Connor demonstrated a will to live in responding to treatments. Connor never stopped giving the medical team a reason to fight for him.

“We feel so blessed to have Connor,” Chrissy Stacy said. “He’s here because of a mixture of God and modern medicine."