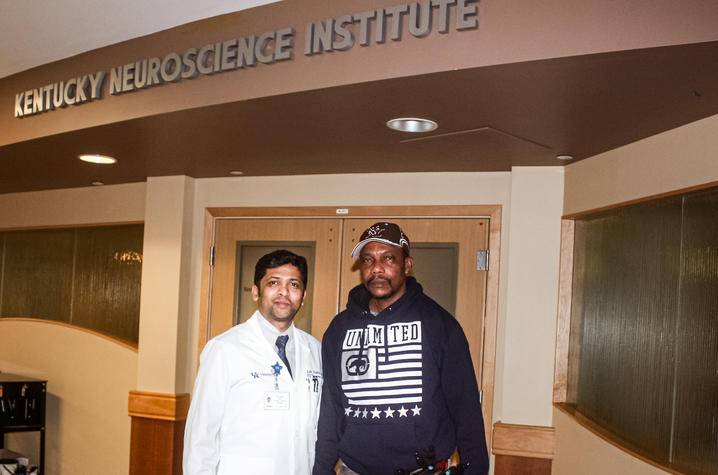 Dr. Zain Guduru and Gregorie Mbuyi outside of the Kentucky Neuroscience Institute. Mbuyi credits KNI with being able to once again walk on his own and provide for his family.

LEXINGTON, Ky. (Feb. 12, 2020) — Being unable to walk and unable to provide for his family is not the American dream Gregorie Mbuyi imagined when moving his family to Kentucky from the Democratic Republic of Congo in 2015.

“I was feeling shocked,” explained Mbuyi with the help of a translator.

Shocked because the pain and discomfort he initially likened to heartburn were aggressively spreading through his abdomen and down his right leg – he lived like this for about two years. The husband and father of five losing the ability to walk on his own, eventually also lost his ability to work.

“While I was sick, life was very difficult. My wife was working double. She worked in the day and at night.” He remembers feeling helpless sitting at home while longing to work and make life better for his family. Also, adding to that feeling of helplessness was the fact that he had zero answers after seeing roughly 20 different doctors and specialists.

Mbuyi made the move to America to create a story of new opportunities for his family. The beginning chapters of that story filled with unexpected and life-altering challenges. However, a visit to UK HealthCare's Kentucky Neuroscience Institute in November 2018 quickly changed that course.

“I always ask my patients about how their symptoms are affecting their life. That is when I heard from him that he is not able to work and that he was the only bread-earning member in a family of seven," said Dr. Zain Guduru, neurologist and assistant professor in the University of Kentucky College of Medicine. "I felt bad for him and his family. At the same time, I wanted to get to the bottom of this issue. I remembered seeing one other similar case three years ago.”.

Due to that prior case three years ago, Dr. Guduru had a strong suspicion he was once again looking at a rare disorder known as stiff limb syndrome. Stiff limb syndrome is a neurological disorder that also has features of an autoimmune disease. The condition is characterized by muscle rigidity in the trunk and limbs.

Often people with stiff limb syndrome have antibodies that attack glutamic acid decarboxylase (GAD) in the spinal cord. GAD is an enzyme present in synapses in the central nervous system. It synthesizes an endogenous chemical called GABA and it decreases the firing of the neurons. Based on the symptoms of stiff limb syndrome, “this disease is an analog to tetanus,” he said.

Guduru ran a few tests during Mbuyi’s initial visit. One of those was to check for the anti-GAD antibodies that attack the spinal cord. The results were new for the neurologist, “They were elevated to a number I had never seen before.”

A treatment plan was developed and quickly set in motion. The 52-year-old started medication and was admitted to the hospital for three days of infusion. That treatment plan proved successful and only weeks later, at his first follow up visit, Mbuyi walked without assistance.

He also could bend his knees with ease and complete physical therapy. “I saw a happy face and enthusiasm to show me that he can walk without difficulty or pain or stiffness in his muscles," Guduru said. "Gregorie’s significant response to treatment made me feel happy for him and felt proud to diagnose this rare case."

Today, Mbuyi is once again working and providing for his family. “I’m happy. My family is happy.” Their new life in America is also back on track.

“Right now, life is better than before,” said Mbuyi.

Guduru says Mbuyi’s story brings immense satisfaction to the work that goes on at UK. “I was very happy to see him walk again, see him able to go back to work and to hear him say his whole family is happy now," he said. "In the end, it was a goosebumps moment when he said, ‘I am so thankful to UK and my whole family would like to thank UK’.”