Charlotte Callan was given the Spirit of Lexington Award by Mayor Linda Gorton for her heroic actions.

The Lexington native goes all out with her decorations. She celebrates her Oct. 29 birthday Halloween-style. And she’s been a “zombie” dancer in Lexington’s annual Thriller Parade for 10 years. On Oct. 24, 2021, she got ready for the parade just as she had every year prior.

“I wear a royal blue bridesmaid dress every year – it’s become my costume,” Sarah said. “I put on my zombie makeup with the dripping blood and bites and everything.”

For those unfamiliar with the Thriller Parade, it’s part of Lexington’s annual Halloween Festival. Hundreds of “zombies” lie in wait on Main Street, in front of the Kentucky Theatre. As “Michael” and his date exit the theater, just as they do in Michael Jackson’s iconic “Thriller” music video, the zombies stir, rise and perform perfectly synchronized choreography.

Sarah staked out her usual spot in front of the Kentucky Theatre, because she likes to be in the main group of zombies that perform the dance as many as 10 or 11 times down Main Street. She rose up from the street, ready to dance.

The next thing she can recall is waking up in the hospital.

She doesn’t remember falling to ground, or people gathering around her. She doesn’t remember when a well-meaning bystander attempted CPR. Nor can she recall the moment when Charlotte Callan, who had been sitting on the sidewalk nearby, came over and took command of the situation.

“I saw someone performing intermittent compressions,” recalled Charlotte, a UK HealthCare pharmacy tech and student in the University of Kentucky College of Arts and Sciences. “I had just received training, so I went over to see if I could help and offer assistance.”

What she saw was a group of people responding to the situation. Having been recently certified herself, Charlotte offered her assistance.

“I asked the woman who was doing intermittent compressions if she was tired and if I could take over,” Charlotte said.

It took about ten minutes for EMS to arrive. During that time, Sarah received constant compressions. Charlotte was she fixated on doing all she could to save Sarah.

“It was stressful because I wanted to do everything correctly for Sarah’s survival,” Charlotte said. “I wondered, is my training coming through? Is this going to be something she can live through? On top of that, you’re trying to ease the crowd’s minds by taking control because when people panic, they normally do not respond logically in emergent situations.”

The EMS team arrived after slowly navigating down Main Street through a hoard of dancing zombies. As they put Sarah in an ambulance, Charlotte found Sarah’s phone and gave it to the responding officer. As the ambulance pulled away, Charlotte was both exhausted and still surging from adrenaline.

“I went back and sat with my brother to watch his girlfriend and her daughter dance in the parade,” Charlotte recalled. “But I was disconnected from them for the rest of the night by being in my own thoughts. I wondered if she was going to live.”

Meanwhile, further down Main Street, Sarah’s husband Barry was waiting for her at their usual post-parade meeting place. As the parade passed, he didn’t see her. Worried, he called their son Kagen, who used the “Find My” app to pinpoint the location of Sarah’s phone. It showed she was at the University of Kentucky Albert B. Chandler Hospital. Kagen raced there, and found Sarah in the cardiovascular intensive care unit (CVICU) where she spent the next 10 days.

“I was out of it for about seven days,” Sarah said. “I have a video of the nurses singing ‘Happy Birthday,’ but no memory of that.”

“Sarah went into a dangerously abnormal heart rhythm,” said Vedant Gupta, M.D., a UK cardiologist who cared for Sarah in the CVICU and continues to see her for follow-up care. “About 8% of patients who had what Sarah had make it out of the hospital – probably even less because there are people who never make it to the hospital.”

So how is Sarah among the fortunate 8%? Gupta says it all came down to the quick thinking and even quicker actions of Charlotte Callan.

“The fact that Charlotte did CPR saved Sarah’s life,” Gupta said. “It was one of those situations where someone goes into this heart rhythm, and people like Charlotte who know CPR can make the biggest difference. As much as I’m fortunate to work at a world-class institution where we have the technology and expertise to help, none of that matters if Charlotte hadn’t been there to do CPR.”

Charlotte says she often conducts an internal cost/benefit analysis of what it means to choose a career in medicine -- evaluating the stress load, financial obligations, maintaining a work/life balance, and more.

"The desire to attend medical school is a major commitment. I’m currently taking –-- and have taken –-- difficult,  upper-level math and science courses, while working a full-time job to sustain a living,” Charlotte said. “Sometimes you wonder if you’re pursuing right career path and if you have what it takes to become a successful medical professional. But then something like this happens, and it has reaffirmed my ambitions to keep pushing forward.”

Charlotte credits her mom, a registered nurse, for her early exposure to CPR and putting her on the path to a career in health care. Moreover, she, like Sarah is an advocate for others to learn CPR as well as basic first aid and how to respond in situations such as Sarah’s.

“If it happened to my parents, I would want someone who is knowledgeable in basic life support to do everything they could for them,” Charlotte said. “The ability to apply lifesaving tactics in emergency situations is a powerful skill set to have. I believe every civilian should know how to respond and do their part to ensure the survival of others.”

“I’m not a religious person, but I now believe I’m supposed to be doing something good,” Sarah said, as she embarks on a new mission to get people to learn CPR. “A law mandating CPR to be taught in high schools passed in 2016, but it’s not being enforced. So, I’m investigating that.”

“The majority of cardiac arrests occur at home,” said Jacob Stone, director of UK HealthCare’s cardiac rehabilitation clinic, where Sarah goes for regular physical therapy. “You’re more likely to do CPR on a family member or loved one than someone you don’t know out in the community.”

But it’s not improbable, as Charlotte demonstrated.

Sarah continues her recovery at the cardiac rehabilitation clinic, getting stronger every day under the supervision of Stone and his staff. Three months after her collapse at the parade, Sarah, along with her husband and sister, gather in a classroom with Stone and a collection of CPR mannequins. Today is the day when Sarah herself learns CPR.

Stone walks them through each step. Check and see if the person is responsive. Call 911 on your cell phone and put it on speaker. Then place your hands in the center of the chest, over the sternum, and quickly press down about two inches. Repeat 100 times per minute until emergency services arrives.

After about 10 seconds of compressions, Sarah sits back, slightly winded.

“How was Charlotte able to do that for 10 minutes?” she asked.

“When the adrenaline is surging, you’d be surprised what you’re capable of,” Stone replies.

Sarah adjusts her position and tries again. She keeps compressing until the mannequin’s lights turn green, indicating she’s performing CPR correctly. In this scenario, she just saved a life.

Sarah and Charlotte now have a unique, unbreakable bond. Looking for a way to honor Charlotte, Sarah contacted her city councilperson James Brown about nominating Charlotte for an award or recognition for her act of heroism.

On Feb. 17, 2022, Sarah and Charlotte met for the first time since that night in October. Surrounded by the firefighters from the EMS team that transported Sarah to the hospital, members of the Urban City Council as well as Charlotte’s parents, Sarah watched proudly as Lexington Mayor Linda Gorton proclaimed Feb. 17 as “Charlotte Callan Day.”

“It’s really hard to put your head around,” Sarah said in her remarks at the ceremony. “I died. This person saved my life. What do you say to someone like Charlotte? That was one of my first challenges. How do you thank someone? How do you thank Dr. Gupta and his staff for what they did for me?”

Studies have shown that the chances of survival from a cardiac event vary greatly from city to city. One of the biggest determining factors is the number of people in your community who know CPR. The more people around you who have CPR training, the more likely one will be around when you need it.

It takes two minutes to save a life. Hands-Only CPR is an effective and powerful tool that only takes 90 seconds to learn. Click here to learn more from the American Heart Association 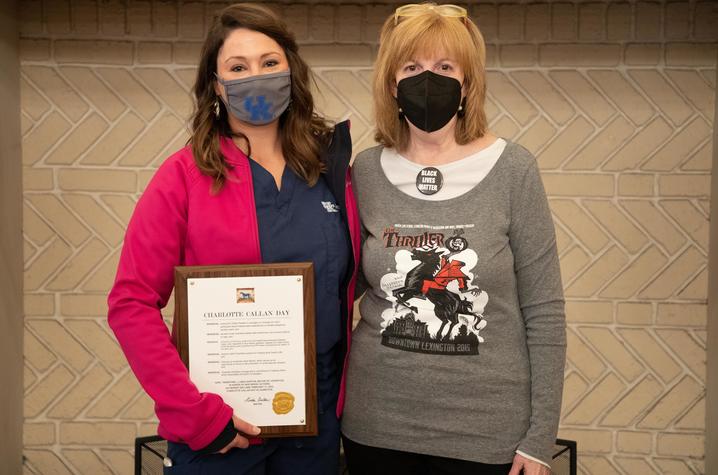 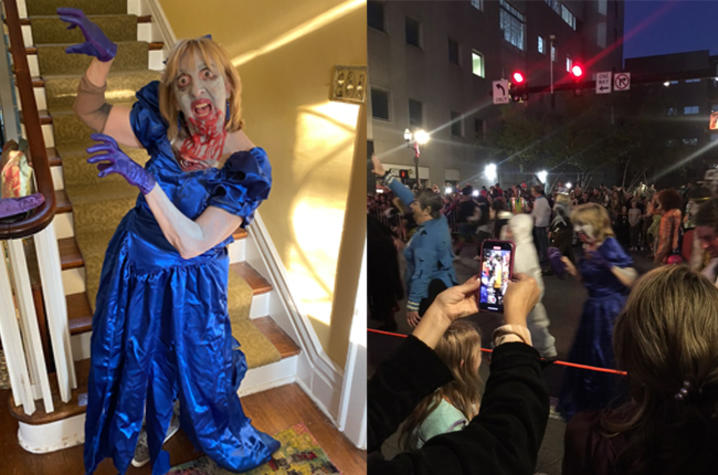 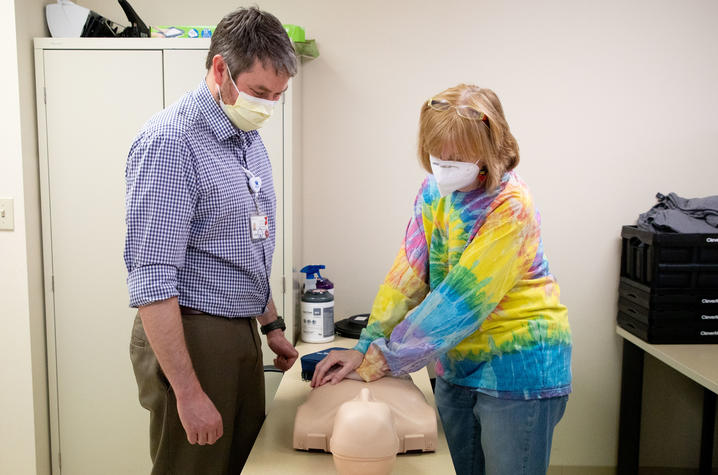 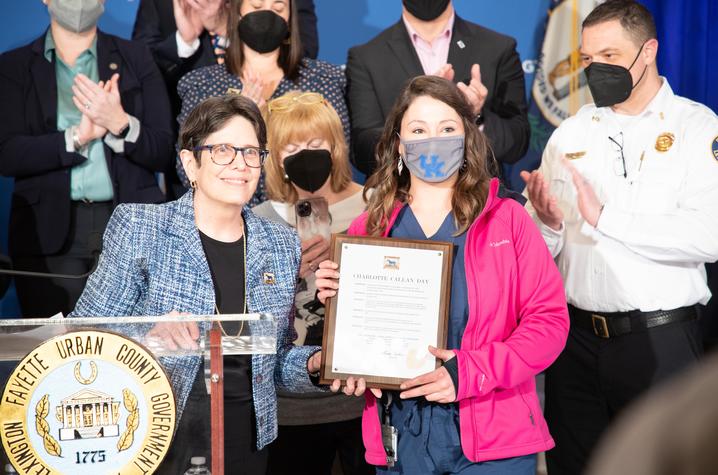