LEXINGTON, Ky. (Dec. 18, 2020) – Because of restrictions at Kentucky Children’s Hospital (KCH), two-year-old Mac-Mac doesn’t get many visitors. But an extra special visitor stopped by via Zoom to bring him some holiday cheer. It was the big man himself.

Santa Claus, who stops by KCH every year to visit with patients and families, is doing his visits a little differently this year. Even though he is immune to COVID-19, Santa chooses to set an example and do his visits virtually rather than visit in person.

“It’s different because I usually visit the children at their place,” said Santa. “But this year, I’m letting them visit me at the North Pole.”

Santa took Mac-Mac on a virtual tour, showing him a video of Dancer and Prancer playing in snow, a sneak peek of the toys in the workshop and a video that Santa shot last year flying his sleigh. Mrs. Claus stopped by and Zippity the Elf zipped in to report to Santa that Mac-Mac had been extra good this year.

Mac-Mac’s favorite part was a video that showed Rudolph when he first joined Santa’s team. He watched as reindeer played in the snow ­– one of which was easily identifiable with his telltale red glowing nose.

Before he signed off, Santa wished Mac-Mac and his mom a very merry Christmas. Mac-Mac responded with an excited “ho ho ho”.

When asked what people should do to get on Santa’s nice list, Santa said everyone should maintain a social distance, wash their hands and wear a mask.

Christmas will look different this year, but Santa says this is only temporary and things will be back to normal next year.

“We want to be safe and stay healthy,” said Santa. “We know we’re going to beat this virus, but we have to be careful and do what we need to do. And that will make next Christmas all that more enjoyable.” 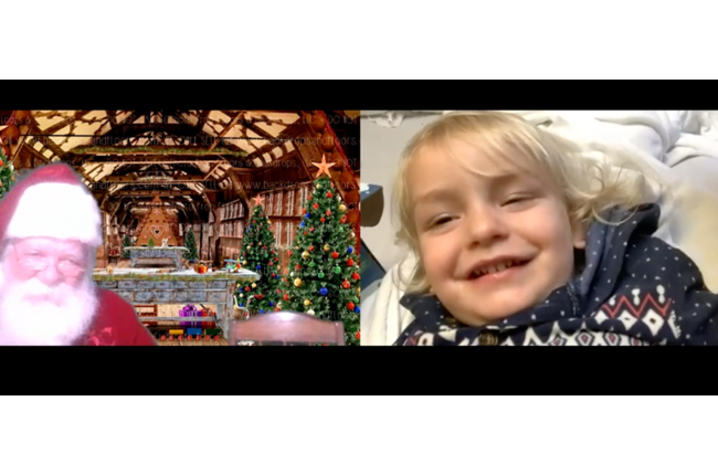 Santa Zoomed into Mac-Mac's room at Kentucky Children's Hospital to give him a virtual tour of the North Pole.