LEXINGTON, Ky. (Oct. 19, 2017) — It’s the fifth race on a beautiful, sunny day at Keeneland Race Course in Lexington and the jockeys are on their mounts up in the gates. The bell rings and the horses spring forward, looking for the perfect spot from which to make their charge. At the second turn, the No. 8 horse stumbles and recovers, but its jockey tumbles to the dirt. He sits for a few seconds, dazed, but then leaps to his feet and scrambles to safety.

Barely topping the 100-pound mark, jockeys seem undermatched when paired with a 1,000-pound thoroughbred. In fact, during a recent interview, one jockey lists a jaw-dropping succession of injuries: two broken collarbones, a fractured wrist, broken ribs, a fractured spine and several occasions when he "got his bell rung." These athletes get back to their job as quickly as possible – and potentially before they're 100 percent. That's because, unlike other professional sports which offer guaranteed contracts to their players, horse racing operates on a "pay-to-play" model:  jockeys don't get paid unless they're riding.

While broken bones are near impossible to miss, concussions are a subtle but potentially more dangerous injury. Concussions – a brain injury caused by whiplash or other blow to the head – are notoriously difficult to diagnose, and symptoms are transient but can last several days or even weeks.

Repeated concussions have a cumulative effect. A recent study in the Journal of the American Medical Association determined that 110 of 111 autopsied brains donated to science by former NFL players showed evidence of chronic traumatic encephalopathy, a degenerative brain disease caused by repeated blows to the head and believed to be responsible for later cognitive impairment, depression and/or aggression. Extreme examples are San Diego Chargers linebacker Junior Seau, who shot himself in 2012, and former New England Patriots star Aaron Hernandez, who committed suicide in jail this spring while serving a sentence for double homicide. At this time there is no data to document the incidence of CTE among jockeys, though anecdotal evidence exists; for example, the effects of Gwen Jocson's repeated concussions forced her retirement from racing in 1999.

During the healing process after a concussion, victims can experience headaches, memory loss, balance issues, sleep disturbances and/or disorientation. According to University of Kentucky College of Health Sciences researcher Carl Mattacola, Ph.D., ATC, that's a dangerous state to be in if you're trying to pilot a 1,000-pound horse around a track at 30 miles per hour. That's why he's developed a clinical and research interest in helping jockeys.

Historically, Mattacola says, attention for the jockeys has been secondary to the equine athlete. But as the awareness of the dangers of concussion has risen, all corners of the racing industry – the tracks, the horse owners, and the jockeys themselves – have come together to assess the situation and lay the groundwork for a new model. And that process has its origins in Kentucky, born of a partnership between the Jockeys' Guild, the Jockey Club, and the UK College of Health Sciences, among others. This is the second year of a pilot project to gather baseline cognitive data on every jockey racing in Kentucky. Mattacola spearheads the project and starting with Keeneland's Fall Meet this month, baseline cognitive and neuromuscular testing was mandatory for every mount.

Mattacola explains that most major professional sports – the NFL, the NHL, FIFA – have concussion protocols that guide decisions about when a player is healthy enough to return to play, but it's difficult to copy their model from whole cloth because each state – and sometimes individual tracks – operates under different set of rules, so return to ride protocols aren't consistent.

"Our group wants to create change in how we manage and assess concussions in horse racing, so we're beginning local and hope to use that data to develop a protocol that can be transferred to other states," he says.

To illustrate how the data he's collecting would be useful, Mattacola uses blood pressure as a metaphor.

"If we know what your blood pressure is this year and you come back and that changes, we can try to determine the underlying factors or the underlying mechanisms that contributed to that change," he said. "Similarly, the baseline assessment provides additional information to the health care provider when a jockey falls, which can help him/her make a decision about whether to suspect a concussion."

Jockeys' Guild National Manager Terry Meyocks said that the Equine Jockey/Rider Injury Prevention Initiative is a logical extension of the Jockey Health Information System (JHIS), a database that stores jockeys' medical histories for access by racetrack medical personnel in the event of a jockey injury. A collaboration by the Jockeys' Guild, The Jockey Club, several thoroughbred organizations and Dr. Barry Schumer, a physician who also serves as Keeneland's medical director, the JHIS immediately demonstrated its merit when a jockey fell on the first day the project was rolled out in 2008.

"Our job is to protect jockeys by making sure that they operate in a safe racing environment," Meyocks said. "As the issue of concussions has come to the forefront, we've made it a priority to educate our jockeys and find ways to protect them, which is in everybody's best interest."

At the Jockey's Quarters on Keeneland's opening day, the Clerk of Scales sends a jockey to Carolina Quintana, a certified athletic trainer and a doctoral student from UK College of Health Sciences, who administers the SCAT-5 assessment tool, composed of a series of questions gathering a detailed injury history and data related to cognitive and neuromuscular performance. Then the jockey completes several simple tasks, such as counting backward by threes and stands on one foot for balance testing.

The jockey acts a bit sheepish as his friends look on in amusement, but this testing, which will be entered into his JHIS record, will be invaluable should he suffer a head injury.

There was not instant buy-in among jockeys, however, who were concerned that the project might affect their livelihood. But Mattacola and Quintana quickly won them over in a series of meetings as the pilot project took shape.

"We — but especially Carolina – have established a strong rapport with the jockeys and they now recognize that we are not here for any other reason than to help them. If they were to be injured, we would have the data to make a healthy decision on their behalf," he said.

This is not Mattacola's first foray into the jockey's world. In 2015, Mattacola conducted a series of tests to determine how well several equine helmet models protected wearers from repeated impacts, which helped inform guidelines for replacing helmets after a fall and prompted the Jockeys' Guild to reinforce that all riders wear ASTM-approved helmets. His work on helmet safety lent him credibility with the jockeys as he nudged the concussion pilot study to fruition. "It's impossible to eliminate all concussions in sports, but we're obligated to do what we can to prevent it, to recognize it when it occurs, and to keep the jockey's long-term health and safety first in mind," he said. The fact that he is also a horseman didn't hurt his standing with the jockeys either.

As Mattacola watches the next race on the monitor, it's easy to see that he's reacting more to the jockeys than the horses. "Now that I know these guys so well, I watch where they are in position, their style, their riding behaviors, and try to figure out how we can help them with technique and performance," he said. His next great chapter may well be applying the resources of the UK Sports Medicine Research Institute (SMRI) to provide jockeys with even more tools to improve performance and prevent injury.

The SMRI was conceived to research injury prevention and performance optimization for the U.S. military, but that data can easily be applied to other physically-intensive activities, including horse racing. There's a biomechanical analysis lab that uses the same technology as that used for video game development, and a first-in-class custom racing simulator with a fully interactive race experience. A neurobehavioral laboratory aids in concussion prevention and recovery. Other labs focus on performance and metabolism, musculoskeletal assessments and other performance metrics. All of it combines to support all athletic types and levels.

Mattacola's journey into the jockey's world has brought a tangible appreciation for the way these men and women – by necessity small and lightweight – manage animals 10 times their size. "They are a pretty amazing group of athletes, so the personal side of helping them is there as well," he said.  "This is truly gratifying work." 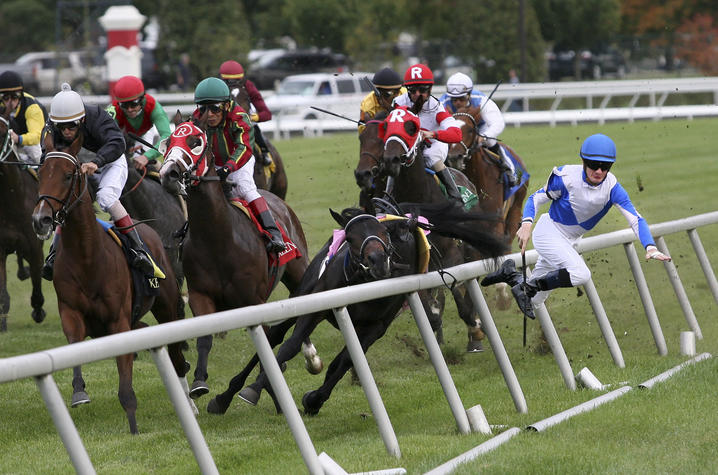 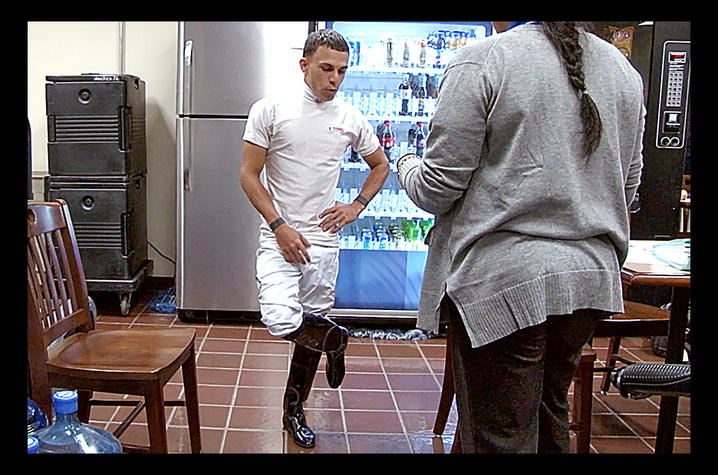 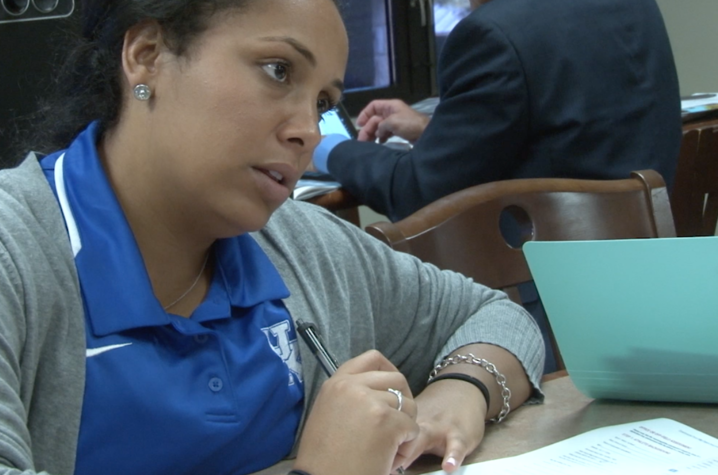