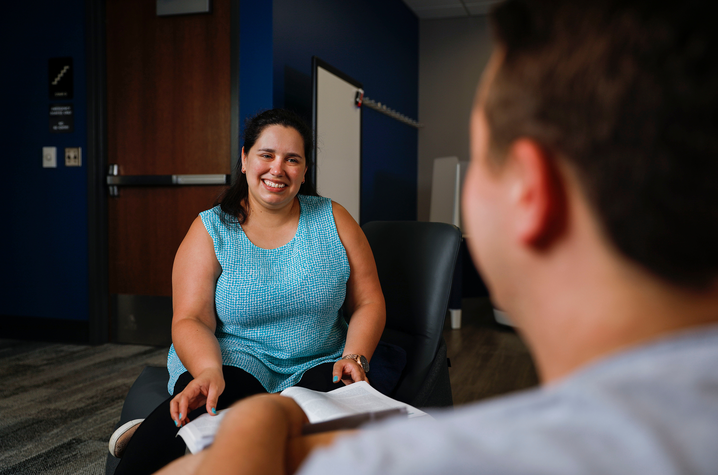 LEXINGTON, Ky. (April 23, 2021) — International students come to the University of Kentucky with hopes of furthering their education and learning about the Commonwealth. For most, it’s an enjoyable experience; for Ximena Oyarzun Gonzales, this was not always the case.

Ximena is a Ph.D. candidate in the UK College of Public Health. Early in her time at UK, she was able to live the typical graduate student life. She was studying hard every day and she quickly became close friends with the other members of her cohort. All it took was a trip home to her native Chile to visit her family to change her life completely.

While home, Ximena was diagnosed with thyroid cancer. They found a nodule in her neck, and it was beginning to metastasize in her lymph nodes. When faced with treatment options, the plan that made sense for Ximena was surgery, but it wouldn’t come cheap.

Courtney Walker is a close friend of Ximena from the College of Public Health doctoral program. Earlier that same year, Ximena organized a fundraiser for Walker’s family after her father had suffered from a stroke. They were having difficulty paying his medical bills before Ximena stepped in.

Walker wanted to return the favor by helping Ximena.

“Normally, I am the person that helps care for others, not the person others are caring for," said Ximena. "It was so nice, it’s just not what I’m used to.”

As Ximena was preparing for her surgery, she was planning on her insurance covering at least part of her procedure. However, she soon found out that insurance would not cover this surgery because it was considered non-emergent.

Walker said when Ximena started talking about dipping into her retirement fund to pay the bills, she knew she had to do something.

“Ximena is an amazing person, and there are so many people in our community who love her,” said Walker. “After what she did for my dad, she’s basically an adopted daughter in our family. I knew we had to help.”

Walker swiftly set up a GoFundMe for Ximena. In order to get the word out to the rest of the college, she reached out to Ally Hucek, president of the Student Public Health Association (SPHA). Each month, SPHA has one social and one service project. Hucek knew right away that Ximena’s story was going to be important to people. They made fundraising for her surgery their main service project for that month.

“Right off the bat, we got tons of donations,” said Hucek. “Faculty, staff, students – people just really wanted to help her.”

Ximena was shocked at how the college and SPHA rallied around her. She wasn’t expecting any help; after all, it’s just the place she’s receiving her Ph.D. This experience showed her that the UK College of Public Health is much more than that – it’s a family.

“It’s a big relief,” said Ximena. “Not having to do that, and having it be all taken care of. I don’t have to worry about how I’m going to pay for the procedure that saved my life.”

While Ximena was in Chile recovering from surgery, SPHA sent her get well soon cards with words of encouragement and love. The GoFundMe that Walker set up has raised $6,880 to help Ximena pay for her cancer treatment but in this community, it’s about more than the money. It was really about making sure Ximena felt safe and supported during her journey with cancer. Now, Ximena is back in Kentucky. Some of her classes are online, but she is working hard toward her Ph.D. and is looking forward to seeing her professors and fellow students soon.

“It’s a weird experience, because it kind of feels like you made an impact on somebody, even if you barely knew them,” said Ximena. “It has been very emotional and humbling. I’m so grateful.”