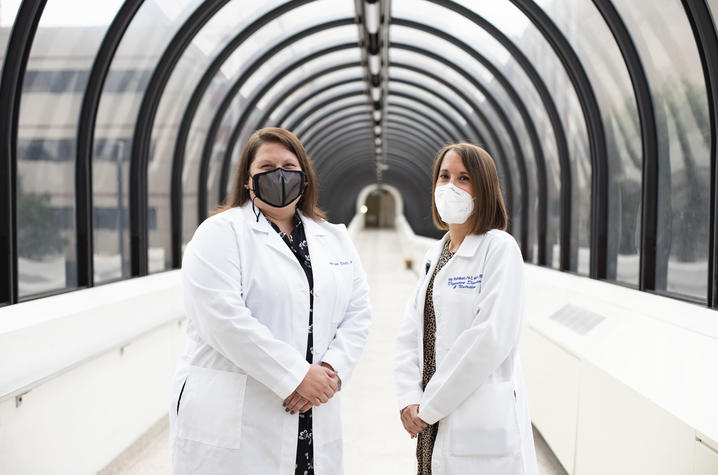 Everything led to that goal. She was her high school valedictorian. She earned a full scholarship to the University of Kentucky. She got into medical school and even took a year off to travel and earn extra money.

“My parents were very supportive, but I couldn’t afford college,” she said. So, she worked, and nothing would stand in the way of her goals.

Until life happened. She began to feel ill and filled with anxiety. School became extremely difficult.

“But I just refused to quit,” Craft said. “This was my life goal.”

Even while feeling ill, she made it through the first two years. “That’s all the classroom work,” she said. “So I made it to where I was doing clinical rotations.”

Before she began, she went to the doctor. During an examination, it was discovered that she had Crohn’s disease, a type of inflammatory bowel disease that causes inflammation of the digestive tract and can lead to abdominal pain, fatigue, weight loss and malnutrition.

“It’s a chronic disease, something I’ll always have, but my doctors wanted to start aggressive treatment to get it under control,” she said.

Some of the medications in that treatment plan were chemotherapy drugs, and they left her unable to continue in the medical program.

“I was not well enough to continue with my rotations at that point, so I was super-devastated,” she said. “But then I thought I could just take a three-month leave of absence and I would be able to come back.”

That three months turned to six, and six turned to nine. Initially, her doctors could not find a medication that would help her. The good news is they finally did — but it took two years.

“So, by the time I felt better, a lot of time had passed,” she said. “I also had a lot of time to reflect. There was some time there where I was too sick to do anything, so I just sat around and thought about what I wanted to do.”

She had learned that stress was a huge contributor to her disease. That’s when she made the decision to leave medical school.

“I just thought that I was finally in a good position,” she said. “I was feeling good, and I didn’t want to go back to feeling that way. I should have listened to myself and stepped away a lot sooner. It was the hardest decision I’ve ever made. I even went to counseling to help me make the decision.”

Walking away left her with a new kind of trauma. She felt like a quitter, and over the next few years she worked different jobs, wondering what she wanted from life. She worked at an orthodontist’s office. She worked with children in foster care.

But she still felt a yearning to work with patients.

That’s when one of Craft's providers told her about the UK College of Health Sciences Physician Assistant program.

Amy Stuffelbeam got her master’s degree in physician assistant studies in 2014.

Since then, she has been serving in that role at UK HealthCare, and one of her patients just happened to be Megan Craft. She could tell Craft was struggling. The two had a lot in common — Stuffelbeam has Crohn’s disease, too.

“I’m very open with my patients about my own struggle,” Stuffelbeam said. “Megan and I quickly bonded over our similar stories. She was struggling to decide if she should return to medical school or take a different path. I suggested PA school as a way for her to be able to practice medicine but complete her education faster.”

But she was still anxious. She was an older student now, and she’d struggled in that world the first time around. Turns out she needn’t be nervous.

She got in on her first try. And Stuffelbeam even wrote a recommendation letter for her.

“I was able to go from feeling like maybe I’m not smart enough to do this because of how things went in medical school to being admitted when I was 34,” she said. “I was 10 years older than most of my classmates when we started class. Yes, it was still a challenge, but I was able to do well.”

Craft is now a physician assistant academic resident for UK HealthCare's Kentucky Neuroscience Institute. Last month, she and her PA class (the second cohort, the Class of 2022) completed their orientation for UK PA Academic Residents.

As a class, they are an impressive group. They have grown from five residents in their first year to 11 residents, with applicants coming from diverse places like Duke, Elon, Sullivan, Lincoln Memorial, A.T. Still, Toledo, South University, the University of Charleston, Nebraska, and Kentucky.

“I am beyond proud of Megan,” Stuffelbeam said. “She is a role model for other patients. Although her disease led to some setbacks in her education, she didn’t let her disease define her. I’ve had the opportunity to watch Megan go from being incredibly sick to accomplishing so much, which is so rewarding as a provider.”

Now that’s something Craft will be able to do as well.

“It really is like I ended up where I should be,” she said. “When it comes down to it, what I love is one-on-one patient connection. It fits my personality. And I’m really excited to finally be like, ‘I have a job at UK as a provider’ — one that I thought I would have had a long time ago. It’s been a really redemptive journey for me.”

Now she’s passing on the recommendation for PA school whenever she can.

“I have had a couple young people who I’ve gotten to know,” Craft said. “I try to give them advice or help with connections. It’s a great profession, and I think I wish someone had suggested it sooner.”