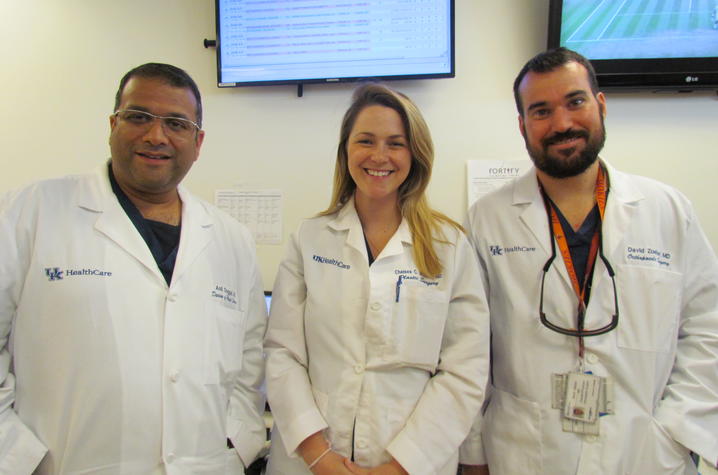 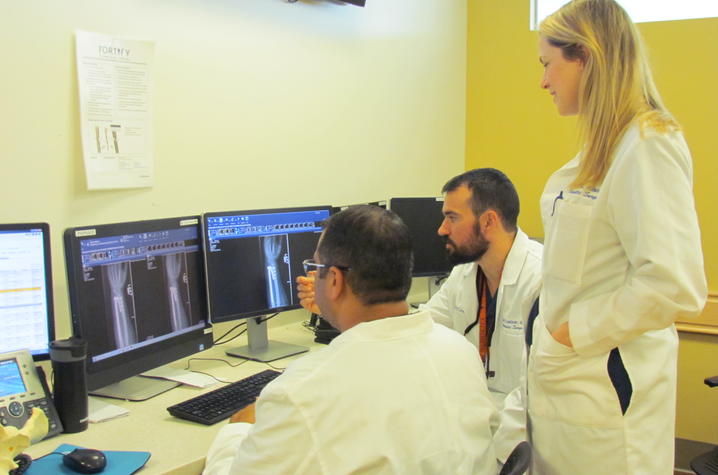 LEXINGTON, Ky. (July 11, 2018) — By the time Eastern Kentucky native Raeanna Napier arrived in Lexington for a consultation with Dr. Anil Duggal, assistant professor of surgery in the University of Kentucky Department of Plastic Surgery, she had already endured eight months of near-constant pain and discomfort in her dominant wrist — the result of a rollover vehicle accident during the summer of 2017. Thanks to a rare procedure, and a collaborative effort between the UK Departments of Plastic Surgery and Orthopaedic Surgery and Sports Medicine, Napier can now enjoy all the benefits of having her full range of motion restored.

Initially, Napier's wrist injury was treated without surgery. As it healed, the tip of the ulna (the smaller, shorter forearm bone) fused to the radius (the longer, outside forearm bone). This made simple tasks, like picking up her young son, nearly impossible.

"I couldn't lift anything over a few pounds without pain and discomfort. I couldn't turn my hand to get change back from a vendor. Opening packages was a hassle," said Napier.

While UK doctors ultimately provided the fix for Napier's wrist, they were not the first providers she saw. "When she came to UK to see us, she had already seen several different providers in the area and was very distressed that there was nothing that could be done for her," said Duggal. "She had been unable to work with limited function of her dominant hand."

The solution, an operation known as a distal radioulnar joint arthroplasty, was invented by Dr. Luis Sheker, a mentor of Duggal's. It involved opening the joint and carefully trimming the head of the ulna. The prosthesis is then placed with the metal stem being inserted down the interior of the ulna. The ulnar head is replaced with a ball and socket type joint that is secured with a small metal cap. Duggal completed the procedure with the assistance of Dr. Chelsea Wallace, a resident in the Department of Plastic Surgery, and Dr. David Zuelzer, a resident in the Department of Orthopaedic Surgery and Sports Medicine. After the operation, Napier wore a protective splint for five days before she could begin moving her wrist.

Napier has progressed with physical therapy and now, just a few weeks after surgery, has had full range of motion restored to a level equal to her uninjured side.

"We are proud to offer procedures like this to patients in need," said Duggal. "If you think about it, there's nothing more human than hands. The way we interact with our environment is really with hands. That's precious."