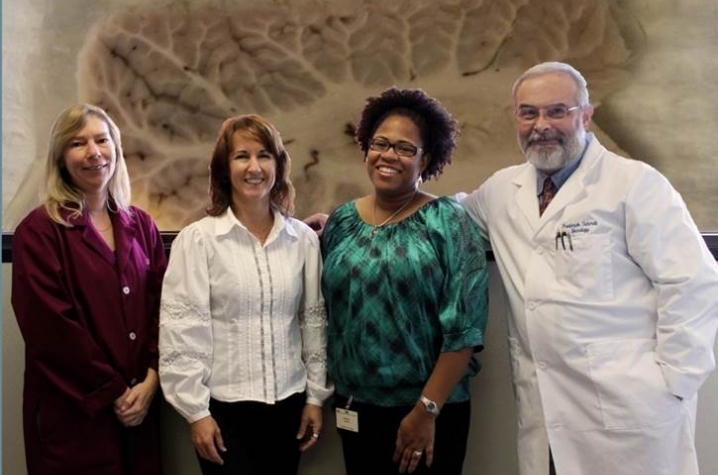 LEXINGTON, Ky. (Aug. 10, 2016) – Researchers at the University of Kentucky Sanders-Brown Center on Aging found that magnetic resonance spectroscopy (MRS), a noninvasive imaging technique, might help distinguish between people with Down syndrome who have dementia and those who do not. The researchers describe their findings in an article published in the journal, NeuroImage: Clinical.

People with Down syndrome have a third copy of chromosome 21, and that chromosome is the same one responsible for the production of a molecule called amyloid precursor protein. Since amyloid overproduction causes the brain plaques that are a cardinal feature of Alzheimer's disease, virtually 100 percent of people with Down syndrome have Alzheimer's pathology in their brain by the time they are 40. But for unknown reasons, many who display this pathology show no traces of dementia. A method for detecting early neurochemical indicators of whether a given person with Down syndrome will develop dementia could ultimately help researchers find new ways to delay or prevent its onset.

"Typically, people develop Alzheimer's disease in their 60s, 70s, or 80s," said Elizabeth Head, Ph.D., a professor at the UK Sanders-Brown Center on Aging and a co-principal investigator for the Down Syndrome and Aging Study at Sanders-Brown. "It's a little easier to study Alzheimer's disease in people with Down syndrome because of the predictability of the age at which this population develops signs of the disease."

The research team at Sanders-Brown, led by Head and Professor Frederick Schmitt, Ph.D., used MRS to measure the levels of key brain metabolites in 22 adults with Down syndrome. The team was able to identify specific metabolic deficiencies that were indicative not only of dementia status, but also of cognitive function, in study participants both with and without dementia.

“This is a great first study of its kind in Down syndrome,” said Head. “We hope to extend the study as we follow people over time. Ultimately, the technique may be useful in future clinical trials of dementia treatments in people with Down syndrome.”