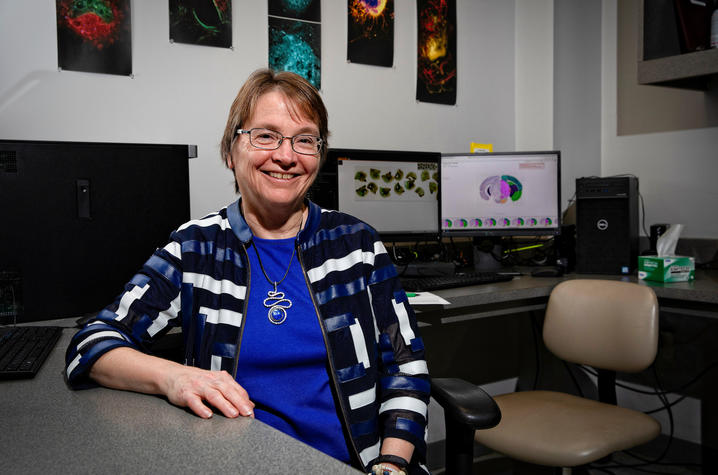 LEXINGTON, Ky. (Feb. 10, 2022) – Linda J. Van Eldik, Ph.D., director of the Sanders-Brown Center on Aging at the University of Kentucky and the Dr. E. Vernon Smith and Eloise C. Smith Alzheimer's Research Endowed Chair, has been appointed to the National Advisory Council on Aging (NACA) among many notable leaders in aging from across the country. She was initially nominated for membership by the National Institute on Aging (NIA) Director in February 2021 and has now received her official invitation from the Secretary of the U.S. Department of Health and Human Services.

“Appointment to NACA is a tremendous honor. I am grateful and humbled to be appointed as a member,” Van Eldik said. “I look forward to using my background and expertise to assist the NIA in fulfilling its mission to support and conduct research on aging and the health and well-being of older people, to foster the development of research and clinician-scientists in aging, and to disseminate health information to a variety of audiences.”

Appointment to NACA is granted with an invitation from NIA Director Richard Hodes for a four-year term to advise the secretary of the U.S. Department of Health and Human Services, the director of the National Institutes of Health, and the director of NIA to support research and information initiatives that support the health and well-being of adults as they age.

“This appointment illustrates national recognition of the world-class research, education, training and clinical programs being done here at UK,” Van Eldik said. “It shows that the University of Kentucky is an institution that fosters successful leaders and is represented on the council alongside members from other prestigious universities such as Harvard Medical School, Columbia University, UCSF, UCLA and University of Michigan.”

In addition to working alongside faculty from top universities, Van Eldik will serve with a university president, a dementia advocate and retired pastor, and other various leaders from private foundations and aging-related societies. During this four-year term, Van Eldik will meet with NACA three times a year to consider applications for research and training, recommend funding for grant applications, and assist the NIA in making their strategic decisions and other institute initiatives.

“From her groundbreaking research on brain inflammation and its role in neurodegenerative diseases to her leadership within UK’s Neuroscience Research Priority Area and the Sanders-Brown Center on Aging — which has seen considerable growth since she took the helm in 2010 — Linda Van Eldik embodies the impact our investigators have in the national research community,"  said UK Vice President for Research, Lisa Cassis, Ph.D. "Her commitment to improving the lives of people with Alzheimer’s and other forms of dementia is unparalleled.”

The University of Kentucky initiated its aging program in 1963. With a grant from the Eleanor and John Y. Brown Jr. Foundation in 1972, the construction of the current Sanders-Brown Research Building was begun and, with additional funding from the state, a program in biomedical research was implemented. In 1979, under the direction of the late Dr. William Markesbery, Sanders-Brown emerged as a national leader in efforts to improve the quality of life for the elderly through research and education. SBCoA's major areas of focus are healthy brain aging, and risk factors and mechanisms contributing to Alzheimer’s disease and related dementias.

The National Institute on Aging (NIA) is one of 27 Institutes and Centers of the National Institutes of Health (NIH), a component of the U.S. Department of Health and Human Services.  Congress established the NIA in 1974 to lead a national scientific effort to understand the nature of aging in order to promote the health and well-being of older adults. The NIA mission encompasses basic, translational, and clinical research; training and career support for investigators at all levels; resource allocation; and health communication to a range of audiences. NIA is at the forefront of scientific discovery about the nature of healthy aging to extend the healthy, active years of life, and is also the lead federal agency within NIH for Alzheimer’s disease and related dementias research.