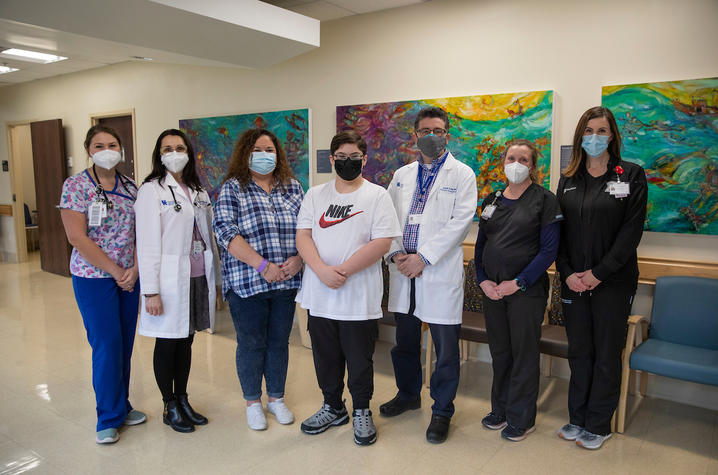 After he was diagnosed with severe liver disease at age 10, Tyson and his family worked with Dr. Samir Softic at the KCH Pediatric Fatty Liver Clinic on a medication regimen and new eating habits. Pete Comparoni | UK Photo

In late 2019, his parents had seen enough. Tyson was gaining weight, and his “run-down feeling” was getting worse. The family had a history of liver disease. Tyson’s mom, Brooke England, took him to see the family’s local doctor in Jamestown, Kentucky.

“While we were there, I asked the nurse practitioner if she would do a blood panel on Tyson,” Brooke said. “Of course, he didn't like the idea of it, but Mama did, so Mama won.”

“I'm a critical-care paramedic," Brooke said. "I know just enough to get me in trouble. I've worked in the emergency room for a few years. I knew that his lab work itself was very off and was at a very dangerous level.”

The doctor in Jamestown referred the Englands to Samir Softic, M.D., at the UK HealthCare Kentucky Children’s Hospital Pediatric Fatty Liver Clinic for further evaluation and treatment of Tyson’s condition. “And I’ll tell you what,” Brooke said, “we could not have asked for a better doctor.”

“It's not always the patient's fault,” Softic said. “Here we had the most compliant patient that we were ever going to find. This one, this family – they were really following through with everything that they could. Tyson tried to do the best he could, and his parents were trying to help him the best that they knew how.”

‘We found it in time’

Tyson was 10 when he was diagnosed with non-alcoholic fatty liver disease (NAFLD), the most common cause of chronic liver disease in American children. Sometimes, people with NAFLD experience general fatigue like Tyson did; sometimes, there’s discomfort in the abdomen. But most often, NAFLD is not revealed by external symptoms.

Tyson was found to have severe liver disease with advanced fibrosis – a buildup of scar tissue left behind after injury – jeopardizing healthy liver function and regeneration.

“I didn't want this to happen to me,” he said. “Liver fibrosis is nothing that anyone wants to deal with.”

Other than diet management and exercise, there aren’t tried-and-true treatments for NAFLD, “and we know well that lifestyle management is not going to work for the majority of our patients,” Softic said.

“I mean, our environment is so filled with these empty calories,” he said. “And especially for kids, they can't really choose everything that they are going to eat. We usually say, ‘Oh, lose weight, and your fatty liver disease will be cured.’ But for some patients, this is an impossible task. And even for the patients who are willing to follow medical advice and who are doing their best, losing weight is difficult. Some just can't do it.”

Given the lack of established therapies or medications approved by the U.S. Food and Drug Administration (FDA) for NAFLD, Tyson’s case demanded creativity, collaboration and persistence – “a push further,” as Softic called it.

Tyson’s initial evaluation with Softic showed class three obesity and an “ALT” level of 185 U/L, or units per liter. That’s a measure of an enzyme, alanine transaminase, which is found in healthy liver cells but is released into the blood when liver cells die. A normal ALT for a 10-year-old boy is 26 U/L. Because elevated ALT is a marker of liver injury, Softic excluded other common causes of liver injury and ordered a biopsy to stage the extent of liver disease.

“When the biopsy came back as Stage 3 liver fibrosis, that was a gut-wrenching moment,” Brooke said. “At that level of fibrosis, it’s often followed by cirrhosis. By the grace of God, and a really good doctor, we found it in time.”

“And that helped some,” Softic said. “His ALT decreased from 185 to 97, but that’s still much higher than what would be expected to prevent further liver injury.”

Some clinical studies have shown vitamin E to provide some benefit in terms of lowering ALT. But after two months of treatment, Tyson’s ALT was essentially unchanged at 101. Softic stopped the Vitamin E – but kept digging.

“I talked to my colleagues in adult endocrinology who have run some studies around an anti-diabetic medication, pioglitazone,” Softic said. Moreover, before joining UK HealthCare, Softic spent seven years at Joslin Diabetes Center at Harvard Medical School where he studied insulin signaling and anti-diabetic medication including pioglitazone. “So, we decided to put Tyson on that medication, and his liver enzymes started improving nicely – from 101 to 59 to 40.”

But along with the ALT improvement came accelerated weight gain, a known side-effect of this medication. “I talked to a bunch of other providers and leaders in the field for management of fatty liver disease, and a pediatric neurologist at UK, and we decided to start Tyson on a second, off-label medication, which is FDA-approved for migraine headaches and has a very common side effect of appetite suppression.”

With the inventive combination of pioglitazone and topiramate, Tyson’s liver enzymes continued to improve from 40 to 30 and then 26 but, now, so had his weight.

Brooke said, “Anything that Softic was unsure about, he would say, ‘Let me consult with an additional specialist, and then we'll go from there and try to get a game plan.’ It was reassuring.”

One of a kind in Kentucky

The Kentucky Children’s Hospital Pediatric Fatty Liver Clinic is the only program of its kind in Kentucky helping children with NAFLD. It’s the kind of environment that develops the focus and fuels the collaboration that has proven so crucial in Tyson’s healing.

“It’s really these specialty clinics that have the resources and know-how to help these kids when traditional therapy is not yet available or ineffective,” Softic said.

The plan for the next year is for Tyson to continue managing his diet – especially sugar intake – and continue using the two medications. Then, fibrosis imaging will be repeated to assess whether his liver disease has completely resolved.

“He has followed the guidance very well,” Softic said, “even when we started thinking outside of the box.”

Tyson is 12 now. “When this all started out, I was nervous, scared,” he said. “But as it went on, I've gotten a lot better with this, and I'm not as scared as I used to be. I'm feeling a lot better about myself. I am proud of myself.”