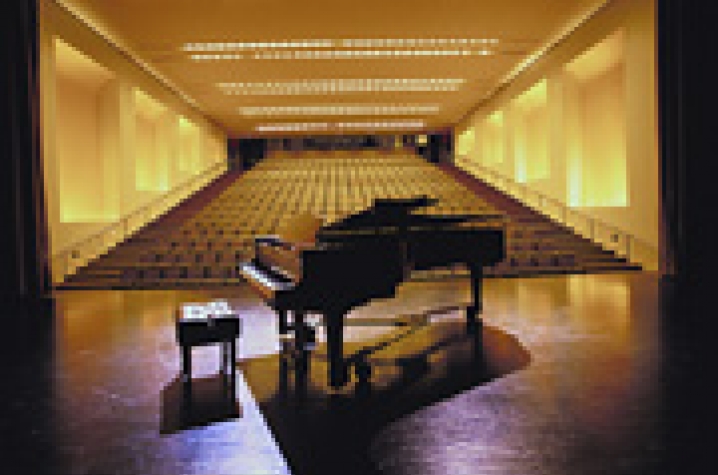 LEXINGTON, Ky. (Aug. 20, 2009) – It was one of the dreams of Jenna Brashear, a University of Kentucky senior majoring in international studies and German with a minor in music performance, to bring Muhlenberg County public schools an acoustically-designed performing arts venue. Brashear proposed just this addition for her hometown's school as part of a project for her John R. and Joan B. Gaines Fellowship in the Humanities at the university, and the dream will come to fruition with the help of the Felix E. Martin Jr. Foundation.

The promise of Brashear's proposal, originally drafted in February 2009 as part of her jury project for the Gaines Fellowship, was first recognized by Gardner and David Richey at First National Bank of Muhlenberg County. Gardner, vice-chair of the Martin Foundation Task Force, then presented the idea for the auditorium expansion to the task force.

"Thanks to Jenna Brashear’s vision and hard work, the generosity of the Felix E. Martin Jr. Foundation, and a school system committed to serving the community, Muhlenberg County will finally get what it needs and deserves," said Gardner. "This project clearly demonstrates how one person can make a big difference. I hope it shows our students their ideas can have a lasting impact on our community."

Brashear, a 2006 graduate of Muhlenberg County High School, has been recognized as a Singletary Scholar and Chellgren Fellow at UK, in addition to being named a Gaines Fellow. An Honors Program member, she also serves on the executive board for the Society for the Promotion of Undergraduate Research, works as a UK 101 Peer Instructor, and is an undergraduate instructional assistant for the Discovery Seminar Program.

Brashear is excited to see her studies pay off, as her hypothetical jury project solution to a hometown need becomes a brick and mortar reality.

"The expansion (of the proposed auditorium) means that this building will be able to serve a much broader use. My hope is it will be an asset for tourism," said Brashear.  "Most of all, the expansion means the arts are viewed as a priority by the Board of Education and the community, and I believe that is vital for students involved in activities such as band, drama and visual arts."