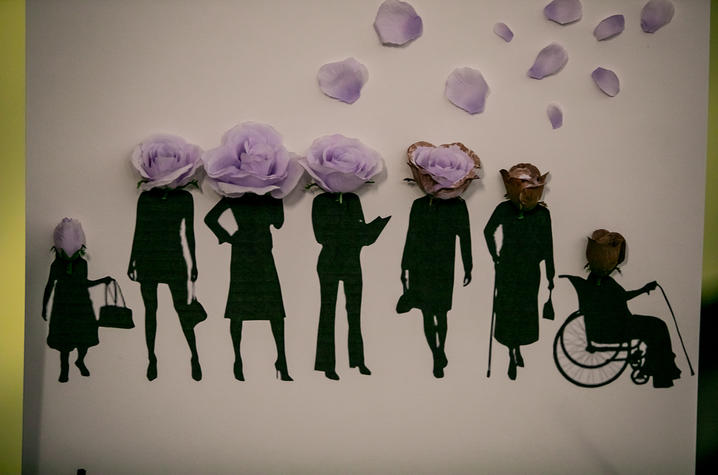 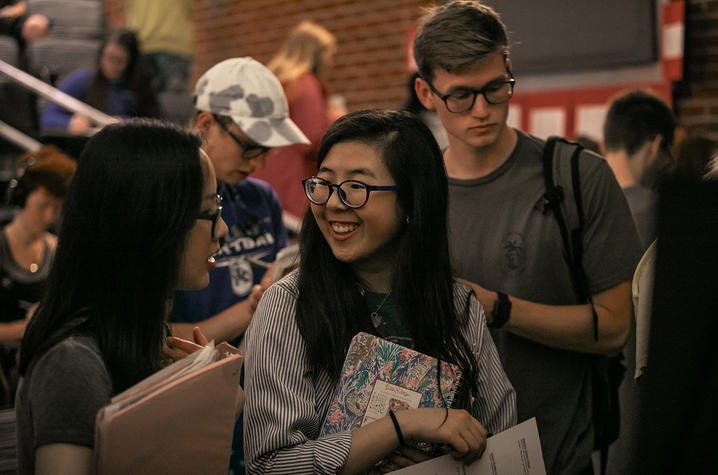 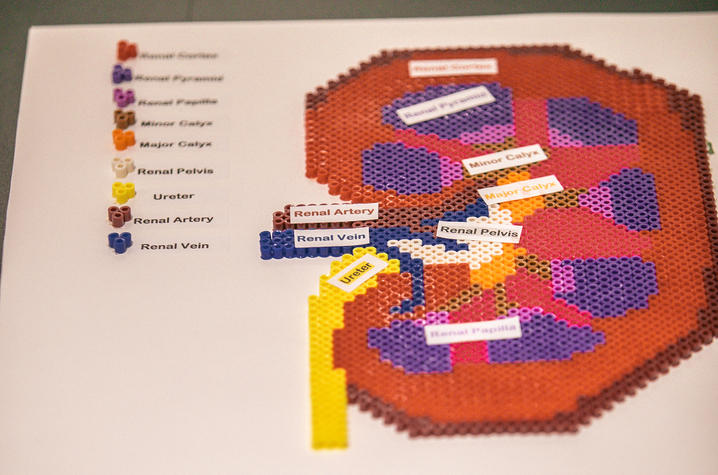 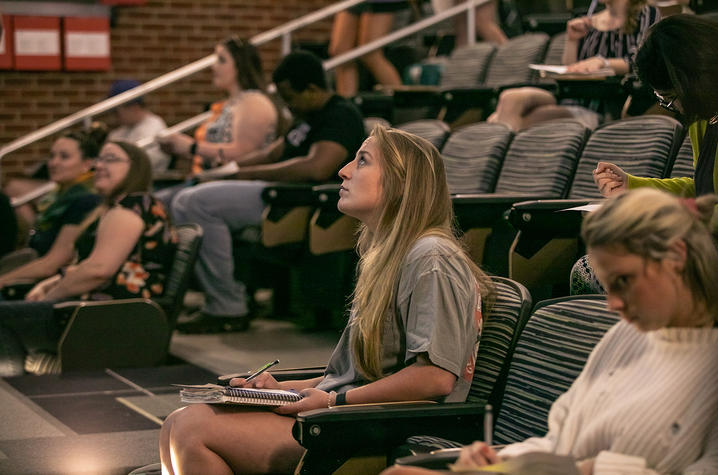 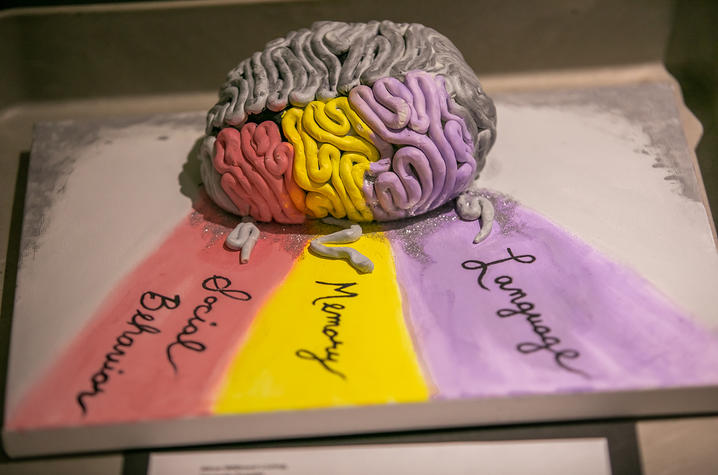 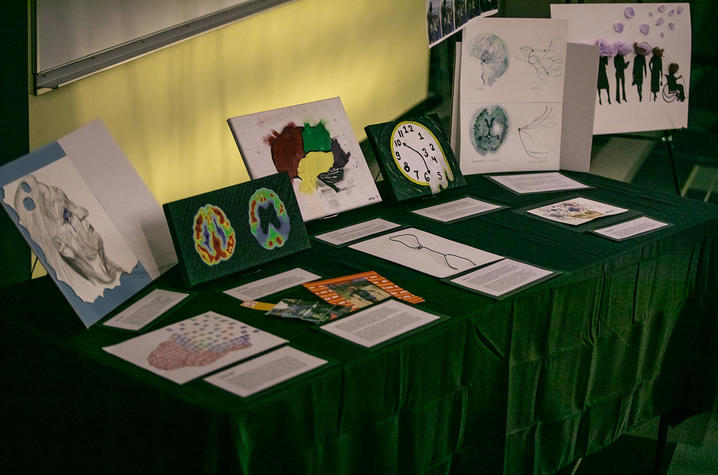 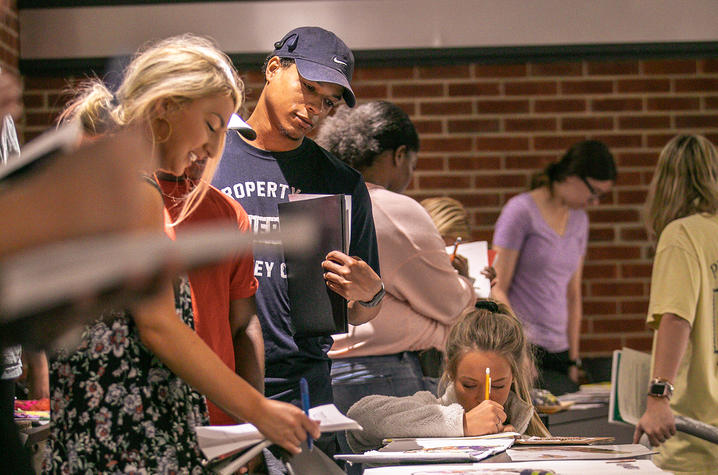 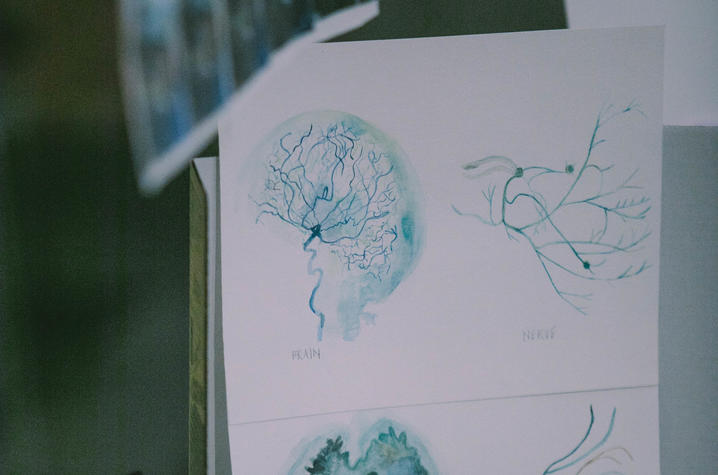 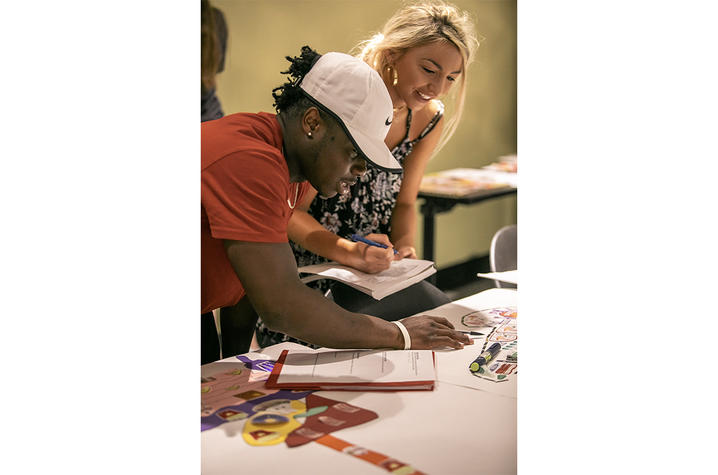 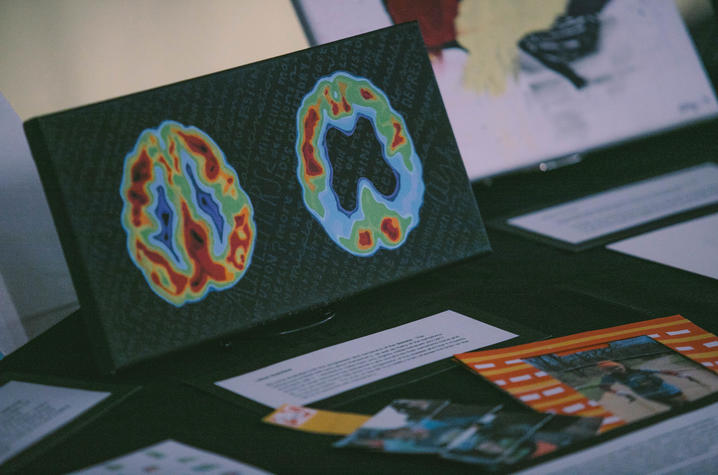 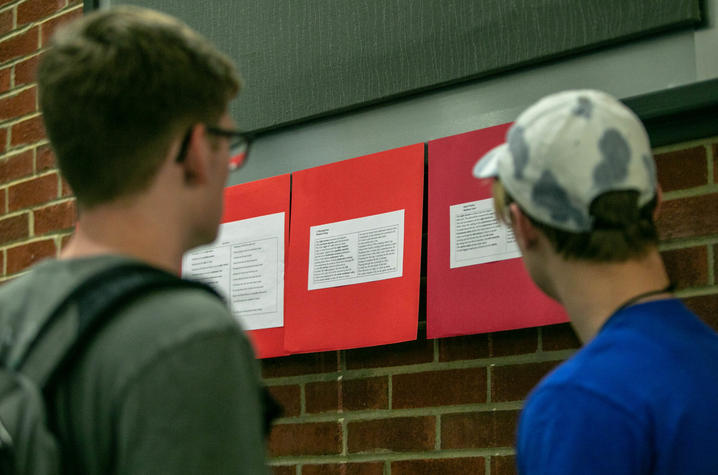 LEXINGTON, Ky. (May 9, 2019) — While most final assignments in science courses involve lab reports or essays, a human anatomy class at the University of Kentucky decided to switch things up this semester by having an art showcase instead.

Nearly a hundred unique works of art, created by students majoring in subjects like neuroscience and biology, adorned the UK College of Nursing Building's auditorium on April 25. Among the art were poems about the blood flow through the human heart, photographs of trees representing the respiratory system, abstract pieces reflecting the processes of neurodegenerative diseases, collages of the digestive system (including one made from print UK advertisements), and depictions of the human kidney created from a variety of materials including foods, plastics and plants.

April Hatcher, an associate professor of neuroscience, describes herself as a fan of art, and believes the more pathways students have to take in information, the more likely they will retain it.

"When I gave students the opportunity (to be creative) they just wowed me ­— they inspired me with all the great creative efforts that they put into it," Hatcher said. "Some of them reflected on family members when they did the nervous system, some of them used creative media for the kidneys, and they just had ideas that were really out of the box. I think anytime you do that, you're wrestling with the material in a different way, and it helps you remember it."

Every student in Hatcher's ANA 109 course was required to create an art project in five different categories for their anatomy portfolio. The top 20 from each category were displayed at the showcase. UK junior Kendall Rump, a neuroscience and biology double major (who also happens to be an artist and singer), had all five of her projects chosen for the showcase.

"There's a lot of overlap between the arts and the sciences, and this project that Dr. Hatcher had us do really showed that," Rump said. "Science is very mathematical, but so is art. Art has a lot of focus on math, like when you're trying to get symmetry and bring together collective ideas. Doctors, scientists, researchers — we all have to be creative to propel science forward."

For Emma Ferrier, a post-baccalaureate student planning to apply to UK's physician assistant studies program, one of her pieces was personal.

"For the nervous system project, I based it off my grandfather who had Alzheimer’s disease," Ferrier said. "He was kind of infamous for his handwritten notecards that he would give to people. So I used those notecards along with photographs of myself, him and my mom (because he would often refer back to my mom, and call me her name). In his notecards, you can see the deterioration of his memory, and the photographs represent certain points in time, like when I first noticed that he was losing his memory, to when he began calling me by my mom's name."

Candy Lu, a pre-pharmacy sophomore majoring in management, says creating art in a science course was an entirely new experience.

"I've been thinking about strictly math and science since I've been in college, and it was quite difficult at first to start thinking about artsy stuff and being creative," Lu said. "But it really helps you learn because you're putting a lot more effort into thinking about (anatomical structures). You have to really understand what it is before you begin thinking about creative ideas you want to use to depict it."

The students' final assignment was to observe their fellow students' art projects and reflect on the pieces.

"You only get one view of it in a textbook or in lecture," Ferrier said. "Looking at these projects, it makes you think of it differently."

"The overarching goal is to enjoy it, help you remember it and interact with the material in a different way," Hatcher said. "Anatomy is a very visual field, but in terms of bringing artwork and photography and different things into it, we haven't in the past. Hopefully we can continue to do this in the future."