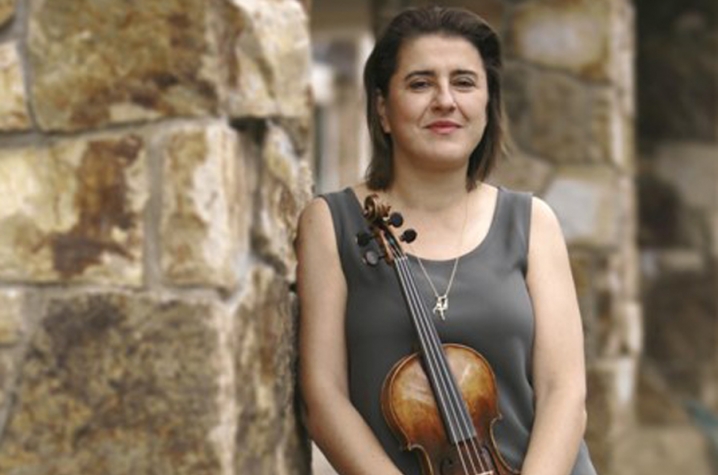 LEXINGTON, Ky. (April 9, 2010) − Nadja Salerno-Sonnenberg, one of the world's greatest violinists, will join the Lexington Philharmonic Orchestra in concert to support arts and healing in the Bluegrass. "Overture to Healing," a special evening of music featuring the artist, takes the stage beginning at 6 p.m. Saturday, April 17, in the Singletary Center for the Arts Concert Hall.

"Overture to Healing," presented by UK HealthCare, will benefit the University of Kentucky's Lucille Caudill Little Performing Arts in HealthCare Program and the Lexington Philharmonic, and it launches the inaugural concert of the Teresa Garbulinska Annual Premier Concert Series.

The Little Performing Arts in HealthCare Program, a joint initiative of UK HealthCare and UK School of Music, offers education, research and performing arts experiences in a health care setting to the Commonwealth of Kentucky, and contributes to the education and training of music students in music therapy, arts administration, performance and other health care-related arts careers. This program recognizes the arts and artists as powerful entities that serve as a positive force in the healing process for all patients and their families.

"This concert is an opportunity to celebrate this new partnership between the arts and healing communities in the Commonwealth," said Dr. Michael Karpf, UK executive vice president for health affairs. "Research indicates a significant improvement in the healing process when art is used to enhance the quality of care given. This collaboration is an important step in improving the overall experience for our patients."

Nadja Salerno-Sonnenberg, described by the Washington Post as "a breathtakingly daring and original artist," is considered one of the top violinists on the concert stage.

Recognized by her industry peers, as well as critics, Salerno-Sonnenberg is a past recipient of the prestigious Avery Fisher Prize, awarded to instrumentalists who have demonstrated “outstanding achievement and excellence in music.”

Salerno-Sonnenberg's talent has garnered the artist many television appearances, including turns on such shows as "The Tonight Show with Johnny Carson," "60 Minutes," "Nightwatch," "Sesame Street," "Live from Lincoln Center" and "Sunday Morning," among others. The violinist, who has also performed at the White House, has collaborated with such artists as Mandy Patinkin, Joe Jackson, Judy Blazer, Janice Siegel, the Assad brothers, Mark O'Connor and Roger Kellaway. Additionally, Salerno-Sonnenberg was one of 40 celebrities featured in a book titled "The Virtuoso."

To listen to music or see a video of a Salerno-Sonnenberg performance, visit YouTube at www.youtube.com/watch?v=H7EpY2XgPHs.

The Lexington Philharmonic presents more than 150 concerts and educational programs annually designed to reach a variety of musical tastes and a vast range of ages.  New Music Director and Conductor Scott Terrell, still in his first year with the Lexington Philharmonic, has already led the orchestra to greater artistic heights, and has big plans for the orchestra's future!

This concert's program will include "Polovetsian Dances" from the opera "Prince Igor," composed by Alexander Borodin, "Four Season of Buenos Aires," composed by Astor Piazzolla, and "Pictures at an Exhibition," composed by Modest Mussorgsky.

Tickets for the event are $100 each and include a champagne reception at concert intermission at the Singletary Center. A processing fee will be added upon completion of transaction. Tickets can be purchased through the Singletary Center Ticket Office at (859) 257-4929, online at http://tinyurl.com/OverturetoHealingConcert, or in person at the ticket office. Parking is available near Memorial Coliseum, off of Rose Street.