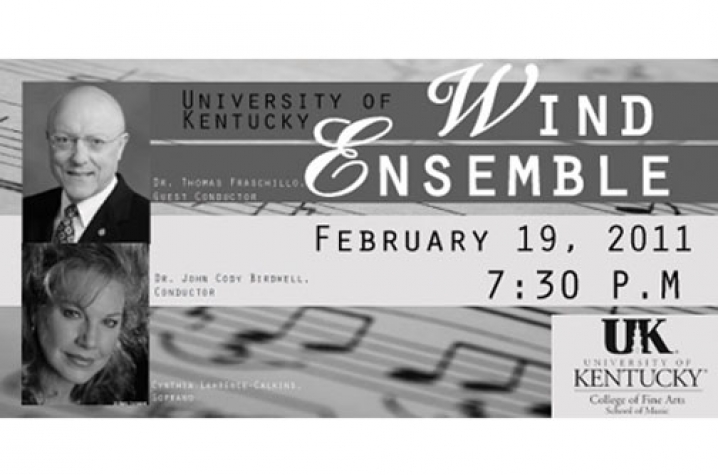 LEXINGTON, Ky. (Feb. 16, 2011) − The University of Kentucky Wind Ensemble Honors Concert will take place at 7:30 p.m. Saturday, Feb. 19, in the Singletary Center for the Arts Concert Hall. The free public concert will feature celebrated soloist and Endowed Chair, Professor of Voice Cynthia Lawrence-Calkins, and guest conductor, Thomas Fraschillo, professor and director of bands at the University of Southern Mississippi.

As part of the upcoming concert, UK Wind Ensemble will be performing "Sabre and Spurs" by John Philip Sousa, "Yiddish Dances" by Adam Gorb, "Bells for Stokowski" by Michael Daugherty, and "Asphalt Cocktail" by John Mackey. Professors Lawrence-Calkins and Fraschillo will join the ensemble to perform three movements of Luigi Zaninelli’s "Five American Gospel Songs" for soprano and wind ensemble.

The UK Wind Ensemble, under the direction of John Cody Birdwell, is made up of the finest wind and percussion performers in the UK School of Music at the UK College of Fine Arts. As the centerpiece of a band program that has served the Commonwealth of Kentucky for more than 100 years, the ensemble continues a tradition of professional-level performances to audiences throughout the state and beyond.

In the summer of 2008, the UK Wind Ensemble participated in a 10-day concert tour of the People's Republic of China and performed for thousands of Chinese citizens in the cities of Suzhou, Yangzhou, Changzhou, and Beijing in celebration of China's hosting of the 2008 Summer Olympic Games. The ensemble has also released several commercially published recordings and has been invited to perform at national and regional conferences for the College Band Directors National Association, and for the Kentucky Music Educators Association Conference.

For more information on this concert or the UK Wind Ensemble, contact the UK Bands at 859-257-2263, or visit www.ukbands.org.