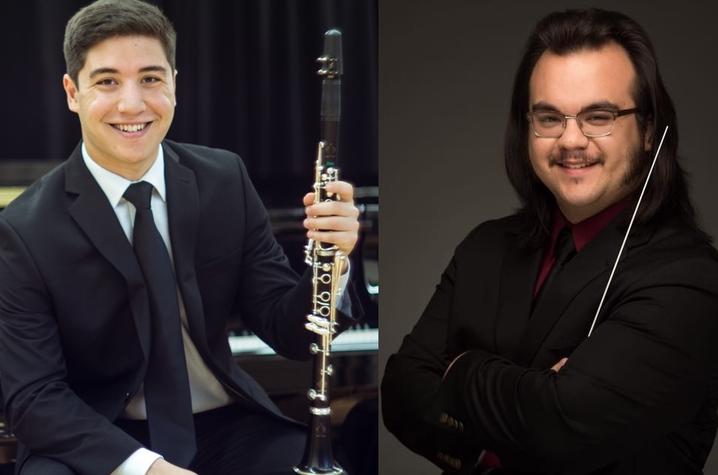 The talents of UK juniors Michael Robinson and Logan Blackman will be showcased at the next UK Symphony Orchestra concert 7:30 p.m. Friday, Feb. 17, at the Singletary Center.

LEXINGTON, Ky. (Feb. 14, 2017) — The critically acclaimed University of Kentucky Symphony Orchestra, conducted by Maestro John Nardolillo, will perform next with concerto competition winner, Michael Robinson, a junior at UK School of Music. The concert will include music by celebrated composers Carl Nielson and Gustav Mahler, as well as a premiere of work by UK junior Logan Blackman. The concert will begin 7:30 p.m. Friday, Feb. 17, at the Singletary Center for the Arts.

Robinson was selected to perform with the orchestra by winning this year's UK Symphony Orchestra Concerto Competition. The competition presents a prestigious opportunity for UK music students to perform a solo concerto with the orchestra. Artistic excellence is the primary criterion, but students must also be full-time music majors and prepare the entire concerto. A panel of judges composed of artists from outside UK reviews excerpts performed by each contestant and selects the top four to return and play their entire concerto. From these finalists, one to three winners are chosen to perform with the orchestra in the Concerto Competition Concert.

A native of Lexington, clarinetist Michael Robinson is pursuing degrees in music education and music performance. A student of Associate Professor Scott Wright, Robinson performs as principal clarinetist with UK's Symphony Orchestra and Wind Symphony, and for UK Opera Theatre productions. Additionally, he has served as a drum major for the Wildcat Marching Band. An avid performer on clarinet and saxophone, Robinson has appeared with the Lexington Theater Company, Blackman Wind Symphony, Bluegrass Area Jazz Ambassadors, and several other ensembles at UK including the Jazz Ensemble, Lab Band, Mega Sax, UK Philharmonia, and multiple chamber groups.

In addition to showcasing Robinson's talents on clarinet, the UK Symphony Orchestra concert will also celebrate the work of Logan Blackman, which he will personally conduct.

Blackman's "Prayer of a Broken Heart," a tone poem, was originally written for a wind ensemble back in 2012 following the sudden death of the composer's parents in October 2011. "It was my reaction to their death describing what I had been through and what my future had to hold," Blackman said.

With a passion for composing, Blackman finds writing his own work very rewarding. "After I put down the last note, I love looking back at the work as a whole and admiring what I have created. To me that is one of the greatest feelings in the world!"

Blackman, who chose UK for his studies based on Lexington and the school's orchestra and faculty, is excited for the opportunity to share his music with a Bluegrass audience at the next UK Symphony Orchestra concert. "This is the greatest honor of my life so far. It is an honor to premiere a work with such a distinguished ensemble, but it is an even greater honor to bring it to life with my friends and colleagues. I am very grateful for this amazing opportunity."

Raised in Paducah, Kentucky, Blackman began his conducting career at the age of 14 and his composition career at the age of 12. His first time conducting was a premiere of his own work during high school. Blackman has been a guest conductor with the Murray State Wind Ensemble, Lone Oak High School Band and West Kentucky Woodwind Choir. At the age of 17, Blackman founded his own Blackman Wind Symphony in Paducah. An alumnus of Kentucky Center’s Governor’s School for the Arts and Commonwealth Middle College, Blackman took organ and piano lessons before finding his love for the bassoon.

Founded in 1918 and made up of undergraduate and graduate musicians from across the United States, Asia, South America and Europe, the UK Symphony Orchestra has long served as one of the university’s most prominent music ensembles. This year the ensemble continues that tradition with performances of some of the greatest works in the orchestral repertoire, alongside contemporary works that push the boundaries of orchestral music. Concerts will feature music by the likes of Ludwig van Beethoven, Pyotr Ilyich Tchaikovsky and George Gershwin, and by modern composer John Adams. The orchestra also continues its partnership with UK Opera Theatre, performing next in the program's production of "The Barber of Seville."

John Nardolillo has appeared with more than 30 of the country’s leading orchestras, including the Boston Pops, the National Symphony, and principal orchestras of Seattle, San Francisco, Detroit, Atlanta, Dallas, Milwaukee, Utah, Columbus, Indianapolis, Oregon, Fort Worth, Buffalo, Alabama, Louisville, Missouri, North Carolina, Toledo, Vermont, Columbus, Omaha and Hawaii. He also recently conducted concerts at the Kennedy Center in Washington, D.C.; the Kimmel Center in Philadelphia; and Carnegie Hall in New York. Nardolillo made his professional conducting debut in 1994 at the Sully Festival in France, and has since made conducting appearances in the United States, France, Germany, Italy, Norway, Sweden, Denmark and China. He has led major American orchestras in subscription series concerts, summer and pops concerts, education concerts and tours, and for television and radio broadcasts. In 2004 Nardolillo joined the faculty at the UK School of Music, where he is currently serving as the director of orchestras.

Doors for the UK Symphony Orchestra concert open 7 p.m. Friday, Feb. 17, with music beginning at 7:30 p.m. Tickets are $10 for general admission, $5 for students, and free for UK students with a valid ID before the day of the performance (only purchase in person at the Singletary Center ticket office). A processing fee will be applied to tickets upon completion of transaction. Tickets are available through the Singletary Center ticket office online at www.scfatickets.com, by phone at 859-257-4929, or in person at the venue.

UK Symphony Orchestra is part of the UK School of Music at the UK College of Fine Arts. The school has garnered a national reputation for high-caliber education in opera, choral and instrumental music performance, as well as music education, composition, and theory and music history.