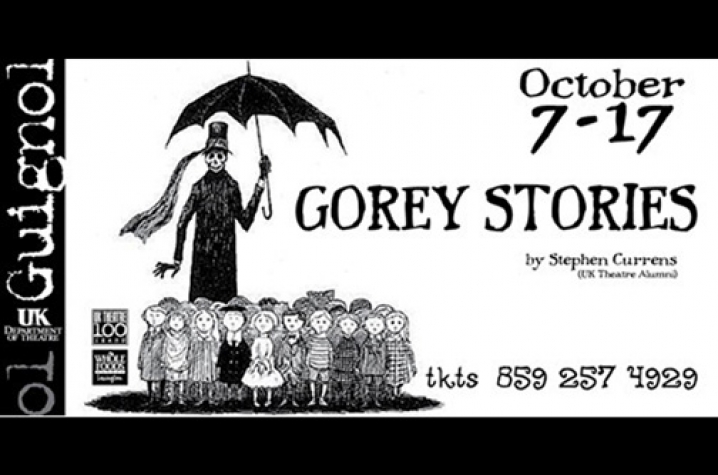 LEXINGTON, Ky. (Oct. 5, 2010) − A work adapted for the stage by University of Kentucky theatre alumnus Stephen Currens that made it all the way to Broadway, is the next production for UK Department of Theatre. "Gorey Stories" returns to its home stage for the next two weekends as UK celebrates 100 years of theatre at the university. "Gorey Stories" haunts the Guignol Stage from Oct. 7-17.

"Gorey Stories" is a macabre assortment of tales, songs and limericks from the gothic writer-illustrator Edward Gorey, which was adapted for the stage by UK alumnus Stephen Currens. The production, first staged at UK, went on to appear on Broadway at the Booth Theatre in 1978.

UK's production of "Gorey Stories" will be directed by Russell Henderson, associate professor of acting and voice, and Ryan Shirar, musical director.

Tickets for "Gorey Stories" are $15 for general admission and $10 for senior citizens or UK faculty/staff/students.

For more information on "Gorey Stories" or any other UK Theatre production from the 2010-2011 main stage season, contact the UK Department of Theatre at (859) 257-3297. To reserve tickets, call the Singletary Center for the Arts ticket office at (859) 257-4929 or visit online at www.singletarytickets.com.