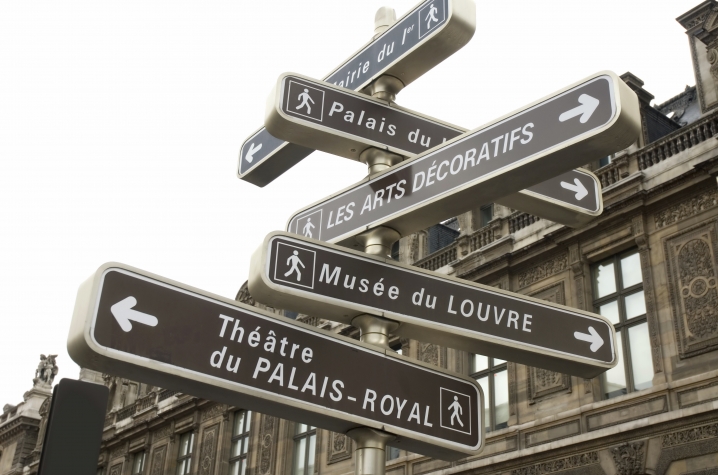 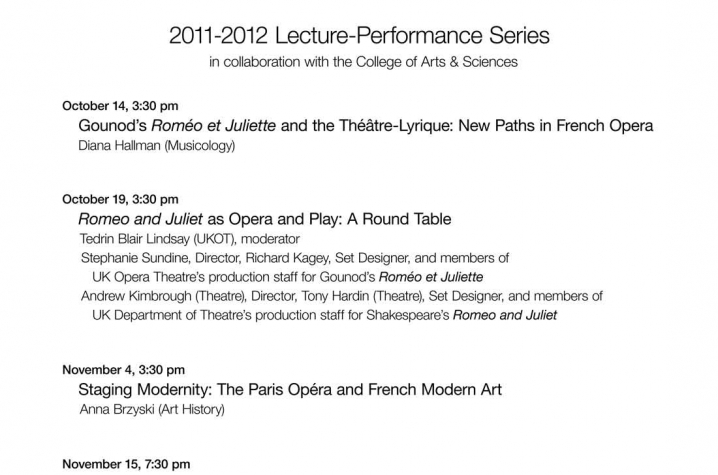 LEXINGTON, Ky. (Oct. 24, 2011) − The University of Kentucky College of Fine Arts will transport audience members to Paris as part of a series of lectures and performances titled "Music, Arts and Culture in Paris," a collaboration with the UK College of Arts and Sciences. The series will feature several events throughout the school year on the art, music, theater, opera, history, and culture of the "City of Lights" in the 19th and early 20th centuries. Unless otherwise noted, the events are free and open to the public and will be presented at the Niles Gallery, located in the Lucille C. Little Fine Arts Library and Learning Center.

"Music, Arts and Culture in Paris" opened this month with the lecture "Gounod’s 'Roméo et Juliette' and the Théâtre-Lyrique: New Paths in French Opera" by Diana Hallman, associate professor of musicology, on Oct. 14, and a round table on ideas of present-day staging and directing of the French opera by Charles Gounod, in connection to modern productions of William Shakespeare's play on Oct. 19 with Tedrin Blair Lindsay, a lecturer and vocal coach with UK Opera Theatre; Stephanie Sundine, director of UK Opera Theatre's production of "Roméo et Juliette; Richard Kagey, set designer and artist-in-residence working on the opera; members of UK Opera Theatre's production staff for "Roméo et Juliette"; Andrew Kimbrough, associate professor of theatre studies and performance and director of "Romeo and Juliet" for UK Department of Theatre; Tony Hardin , associate professor of set and lighting design and set designer for the play; and members of UK Theatre’s production staff for "Romeo and Juliet."

In November, the series will present two more events. Anna Brzyski, associate professor of art history, will present a talk titled "Staging Modernity: The Paris Opera and French Modern Art" at 3:30 p.m. Friday, Nov. 4. Later that month, UK School of Music faculty and vocalists, accompanied by Lindsay on piano, will present a concert titled "Une soirée musicale." This concert will be presented at 7:30 p.m. Tuesday, Nov. 15.

Before the winter break, the series will give a history lecture with Jeremy Popkin  , the T. Marshall Hahn Jr. Professor of History and director of Jewish studies at UK. Popkin's talk, "Revolution and Modernity in 19th-century Paris," will begin at 3:30 p.m. Thursday, Dec. 8.

In the spring semester, "Music, Arts and Culture in Paris" will begin with a talk on composer, organist, conductor, and pianist Camille Saint-Saëns by musicology doctoral student César Leal. "Saint-Saëns within the Parisian Milieu" will be presented at 3:30 p.m. Friday, Jan. 20.

In the month of February Ben Arnold, director of the UK School of Music and professor of musicology, will present "The French Liszt," on the noted composer who lived and worked for many years in Paris at 3:30 p.m. Friday, Feb. 3. A two-day event, "The Paris Conservatoire and the Prix de Rome," will feature Juan Pablo Carreño, recent winner of the Prix de Rome and graduate of the Paris Conservatoire, with an introduction on the history of this famous prize in composition by Diana Hallman at 3:30 p.m. Friday, Feb. 17. A performance of music by Carreño, Claude Debussy and other Prix de Rome winners will follow at 7:30 p.m. on Sunday, Feb. 19, in the Singletary Center for the Arts Recital Hall. French influences on the oboe will be explored in the presentation, "Conservatoire Influences on the Oboe," by Nancy Clauter, associate professor of oboe, at 7:30 p.m. Tuesday, Feb. 21. Finally, February will close with two lectures related to visual art. "Why the School of Paris is Not French" will be presented by Rob Jensen, associate professor of art, at 3:30 p.m. Friday, Feb. 24, and "Displaying Africa in Paris: The Trocadero to the Quai Branly" will be presented by Monica Visoná, assistant professor of art history, at 7:30 p.m. Tuesday, Feb. 28.

Music will be the focal point of the March events in the series. The lecture and performance "The French Mezzo Soprano" will be presented 7:30 p.m. Tuesday, March 20. This will be followed by a keynote musicology lecture by scholar Jann Pasler presented as part of the UK Division of Musicology and Ethnomusicology's Rey M. Longyear Lecture Series. Pasler, a musicologist and pianist at University of California at San Diego, will give a talk titled "The Dynamics of Identity in fin de siècle French Music" at 3:30 p.m. Tuesday, March 27.

"Music, Arts and Culture in Paris" will end with two events in April. UK French and Italian Professor Suzanne Pucci   will present the lecture      "Texts and the City" at 3:30 p.m. Tuesday, April 10. And another evening of French music, "Une soirée musicale," presented by UK School of Music faculty and students will be staged at 7:30 p.m. Tuesday, April 17.

For more information on events related to "Music, Arts and Culture in Paris," visit the series website at: http://www.uky.edu/FineArts/paris/.