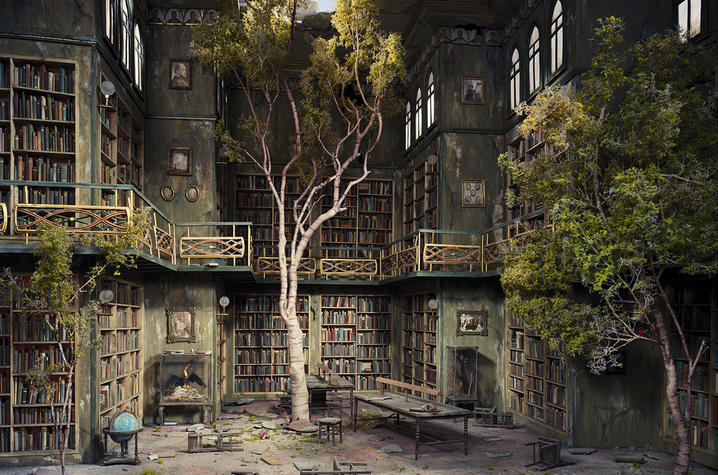 "Library" from "The City" series by Lori Nix.

LEXINGTON, Ky. (Nov. 8, 2017) — For the opening lecture of the University of Kentucky Art Museum’s Robert C. May Photography Lecture Series, the museum will host photographer Lori Nix and guest Kathleen Gerber to discuss their work and their collaborative images of constructed environments. The lecture will begin 4 p.m. Friday, Nov. 10, in the Kincaid Auditorium located in the Gatton College of Business and Economics building. In conjunction with the talk, an exhibition of some of Nix’s work, “The City,” is on display through Dec. 3, at the museum. The lecture and exhibition are both free and open to the public.

Lori Nix’s sensibility was formed by a childhood in Kansas where floods, blizzards and tornadoes were normal phenomena and films like “Planet of the Apes,” “Towering Inferno” and “Earthquake” played at the cinema. Her photographs present spaces of urban ruin — a wrecked anatomy classroom, a once grand library and a Chinese takeout restaurant, to name a few. These are not documents of real world decay but rather images made with painstakingly constructed dioramas that she builds with her partner, Kathleen Gerber.

Nix and Gerber have collaborated for over 16 years. Their images of “faux landscapes” and gritty, urban interiors have gained wide acclaim in both the U.S. and Europe. The duo’s images have graced numerous book covers including those of Dave Eggers and Marge Piercy, and album covers for The Dig and Fountains of Wayne. The pair has also illustrated stories for magazines including Time, O Magazine and New York Magazine.

The May Lecture Series explores photography's roots in the 19th century and its reinvention in the digital world. The lecture series is made possible through the Robert C. May Photography Endowment, a museum fund established in 1994 for the support of acquisitions and programs relating to photography. Other speakers coming to town as part of the 2017-18 series include Teju Cole on Dec. 1.