Watch the Met's trailer for "Porgy and Bess."

LEXINGTON, Ky. (Jan. 14, 2020) — Singing on the Metropolitan Opera stage is a lifelong dream for many young opera vocalists, and one University of Kentucky doctoral candidate, Makeda Hampton, is among the chosen few currently performing at America’s most prestigious opera house. But for this previous math and chemistry student, a dream to perform didn't take center stage until a bit later.

Hampton, a soprano from New Castle, Delaware, is part of the critically acclaimed cast of the Met’s 2019-20 production of “Porgy and Bess.” The opera, which also features seven UK alumni, has been such a hit that three performances were added to its winter run that began Jan. 8.

Since coming to UK for her doctorate in 2016, Hampton has appeared in UK Opera Theatre’s “Showboat” as a member of the chorus and “La Traviata” as the cover for Violetta, the graduate opera production of “A Streetcar Named Desire” as Blanche DuBois, Alltech’s “Celebration of Song” from 2016-2018 and three DMA voice recitals. At UK, she studies with mentor and Chair of Voice Angelique Clay-Everett, who was also her undergraduate voice teacher at Oakwood University in Huntsville, Alabama, and vocal coach Cliff Jackson.

“Porgy and Bess,” by George Gershwin, DuBose and Dorothy Heyward, and Ira Gershwin, is one of America’s most popular operas. The 2019-20 production, which opened Sept. 23, 2019, brings Catfish Row back to the Met for the first time in nearly 30 years. Directed by James Robinson, the cast features Eric Owens and Angel Blue in the title roles and an ensemble that includes Golda Schultz, Latonia Moore, Denyce Graves, Frederick Ballentine, Alfred Walker and Ryan Speedo Green.

UKNow recently caught up with Hampton as she began the production’s winter run scheduled to end Feb. 15.

UKNow: When did you start singing?

Makeda Hampton: I used to sing at church with my sister. Age 6 is the earliest I can remember. I actually hated it! My mom would bribe me with food so that I would cooperate. I started to like singing, however, once I got to high school and joined the choir. I went to an African American Christian boarding academy and the performing arts was one of the main extracurricular activities. Our school also has a legacy of highly accomplished musicians and knowing that history made me excited about singing.

UKNow: When did you first become interested in opera?

Hampton: I became interested in opera in college. I did not grow up listening to opera, although I was familiar with some classical music standards. I actually started out majoring in math and chemistry, with a music minor. After performing my first role of First Spirit in “The Magic Flute” in my freshman year, I realized that I wanted to be a performer. I realized that I was spending more time and effort on my courses in the music department, so I finally switched my major to vocal performance and pedagogy in my sophomore year. Once I committed to the idea of becoming an opera singer, I learned as much as I could about the art form, which included traveling to Austria to study at the American Institute of Musical Studies in Graz.

UKNow: Why did you choose to do your doctorate at UK?

Hampton: I chose to study at UK because I won the first-place graduate award in the Alltech Vocal Scholarship Competition, which granted me full funding for three years of my doctoral program. The added bonuses of choosing UK were that the voice department has an amazing faculty and the program offers so many opportunities to perform with UKOT, under the leadership of Dr. Everett McCorvey.

UKNow: What was the casting process for “Porgy and Bess” with the Metropolitan Opera?

Hampton: I heard that about 400 people had auditioned for the “Porgy” chorus and about 60 people were selected for the production. (Hampton read this in an Associated Press article that included an interview with Donald Palumbo, Met chorus master.)

I knew that the Met held chorus/extra chorus auditions every season, and so I submitted the required materials in October 2018 for the 2019-2020 season. About one month later I received an email inviting me to audition in December 2018.

The audition itself went very quickly — it was two minutes long (thankfully, because I was actually sick that day). I sang “Summertime” from “Porgy and Bess” at the request of the Maestro Donald Palumbo, the chorus master. We were told that notifications of casting would be sent by May 2019 at the latest, so in those types of situations, you just don’t think about it anymore and move on to the next project.

Well in February of 2019, I received the email with an offer to join the production while shopping in the Trader Joe’s on Nicholasville Road. I knew that I would accept the offer, but I waited a couple of hours before replying just so that I could revel in the moment.

UKNow: What is your favorite part(s) of the production?

Hampton: It’s so difficult to choose only one favorite moment! Being on that stage whether in rehearsal or performance is electrifying. Once we’re all called on stage five minutes before the downbeat there’s a lot that happens. The energy is high with everyone going to their places, but when the lights fade to a blackout, the set becomes quiet, the orchestra begins playing, and the curtain rises is probably my favorite moment. It’s a reminder that years of hard work and dedication to my craft allowed this opportunity to manifest the way it has in my life, and I do not take it for granted.

A second favorite part is standing in the wings, listening to and watching Angel Blue (Bess) sing on stage.

UKNow: How much rehearsal time went into staging “Porgy and Bess”?

Hampton: Seven weeks — the first week was intense music rehearsal and the remaining six weeks were for staging. For about four weeks we rehearsed on a very functional mock set (minus the turntable) and then we moved to the main stage for the final two weeks before opening night.

UKNow: What does a normal show day look like for you?

Hampton: A normal show day is usually very chill. The majority of our shows are at night and end late, so I usually try to sleep in until about 10 a.m. I’m also not a morning person so I intentionally don’t set an alarm. Once I am up and about, I make lunch and pack dinner and snacks. Since we’re called to the theater 30 minutes before the show, I do most of my makeup at home.

I usually arrive about an hour before curtain because I don’t like to rush. Also, when we first started, I got lost a lot once we moved to the dressing room and backstage area (the Met is HUGE), so going early keeps me from getting frazzled. I still occasionally get lost! My costume is usually hanging at my dressing station by the time I arrive, so I get dressed and use the provided robes if I need to go to the cafeteria to eat (or grab a small coffee) before the show.

UKNow: Any special memories from the run of the opera so far?

Hampton: There is a very real feeling of community that exists among the cast. Everyone is kind and encouraging. We are a loud, funny, friendly and loving cast, and I believe that much of this production’s success is because the community we create on stage already exists off stage.

The Met also added three more performances of “Porgy and Bess” to the original run, which has never been done in recent history.

UKNow: What’s it like to also be part of such a large group of vocalists with UK connections performing together in this production?

Hampton: Being in a production with so many friends from UK and beyond is very fun. There were times when we could all laugh and joke about specific experiences we had at UK. Some of us have been friends for at least 15 years.

UKNow: What advice do you have for future opera students who might want to follow in your shoes?

Hampton is one of eight Wildcats lending their talents to the Met’s cast and chorus of “Porgy and Bess.” Other vocalists performing in the production are alumni La'Shelle Allen, Denisha Ballew, Christine Jobson, Andrea Jones-Sojola, Karmesha Peake, Markel Reed and Reginald Smith Jr.

In addition to the UK vocalists, UK Symphony Orchestra alumnus Seth Morris has served as principal flute in the pit for the Metropolitan Opera Orchestra.

Local audiences don’t have to travel to New York to see this talented group of Wildcats in the Met’s production of “Porgy and Bess.” The opera will be presented at cinemas nationwide Feb. 1 as part of the opera house’s “Live in HD” series. 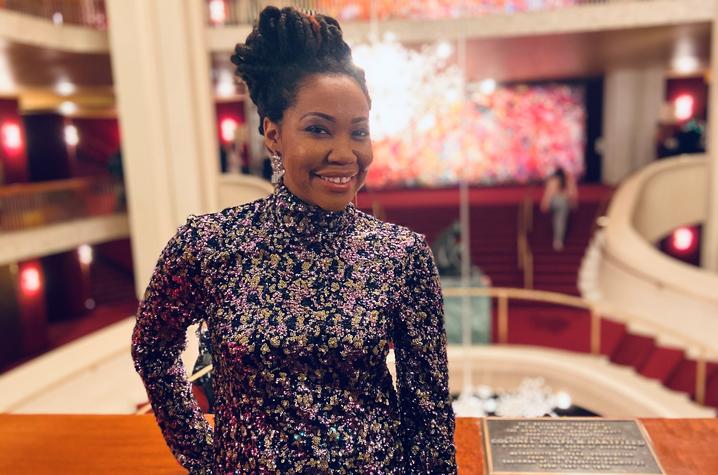 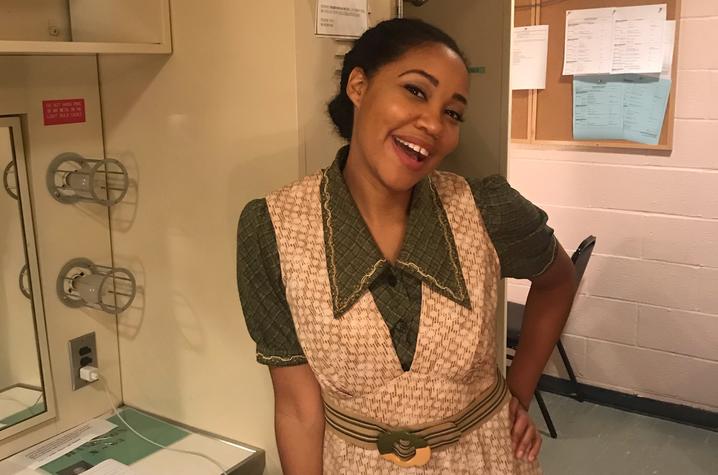 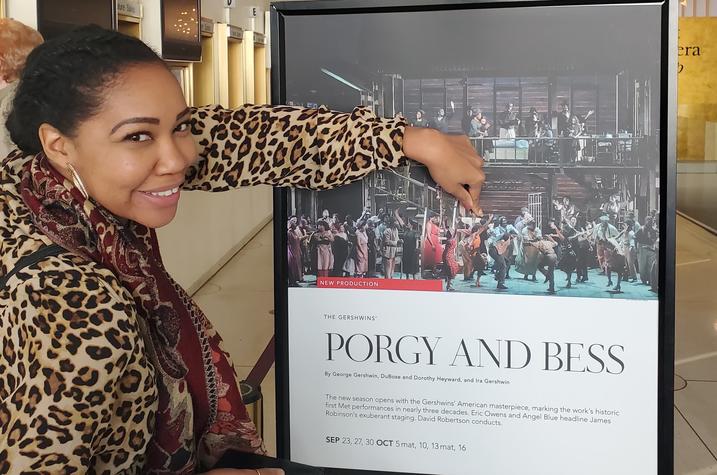 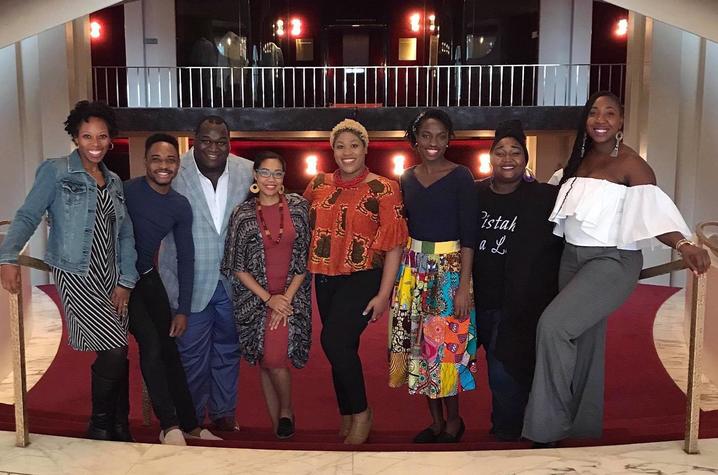 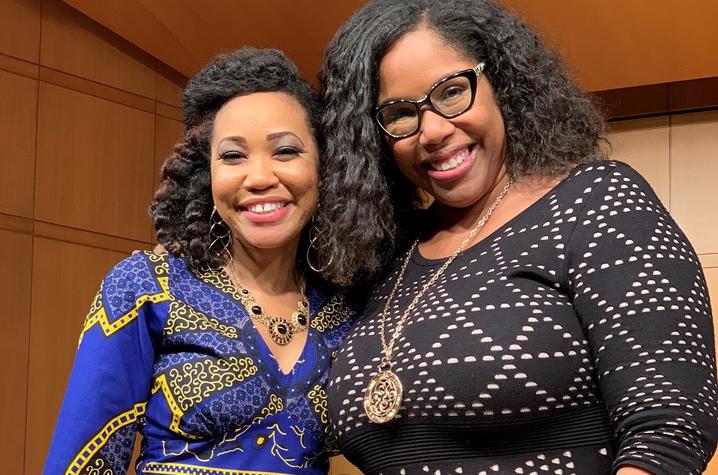