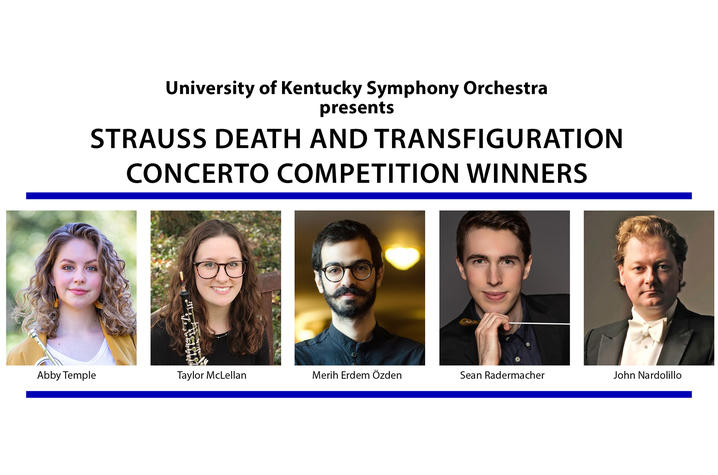 LEXINGTON, Ky. (Oct. 26, 2022) —​ Up next for the University of Kentucky Symphony Orchestra will be Richard Strauss’ programmatic tone poem, "Death and Transfiguration," at 7:30 p.m. Friday, Oct. 28, at the Singletary Center for the Arts’ Concert Hall. The program will also include Cesar Franck’s "Psyche et Eros," Jean Francaix’ "L'Horloge de Flore (The Flower Clock)" and Joseph Haydn’s Trumpet Concerto.

“Each year, the UKSO hosts a Concerto Competition for its students,” says Temple. “Taylor and I both won in 2020, along with Madison Jones, who was able to play her concerto last season. Due to COVID, our concert in March 2020 was canceled, so we are finally getting a chance to perform these solos for an audience after two and a half years!”

Nardolillo has appeared with more than 30 of the country’s leading orchestras, including the Boston Pops, the National Symphony, and principal orchestras of Seattle, San Francisco, Detroit, Atlanta, Dallas, Milwaukee, Utah, Columbus, Indianapolis, Oregon, Fort Worth, Buffalo, Alabama, Louisville, Missouri, North Carolina, Toledo, Vermont, Columbus, Omaha and Hawaii. He also recently conducted concerts at the Kennedy Center in Washington, D.C.; the Kimmel Center in Philadelphia; and Carnegie Hall in New York. Nardolillo made his professional conducting debut in 1994 at the Sully Festival in France and has since made conducting appearances in the United States, France, Germany, Italy, Norway, Sweden, Denmark, Austria, the Czech Republic and China. He has led major American orchestras in subscription series concerts, summer and pops concerts, education concerts and tours, and for television and radio broadcasts. Nardolillo is the artistic director of the Prague Summer Nights Music Festival, and in 2004, he joined the faculty at the UK School of Music, where he serves as the director of orchestras.