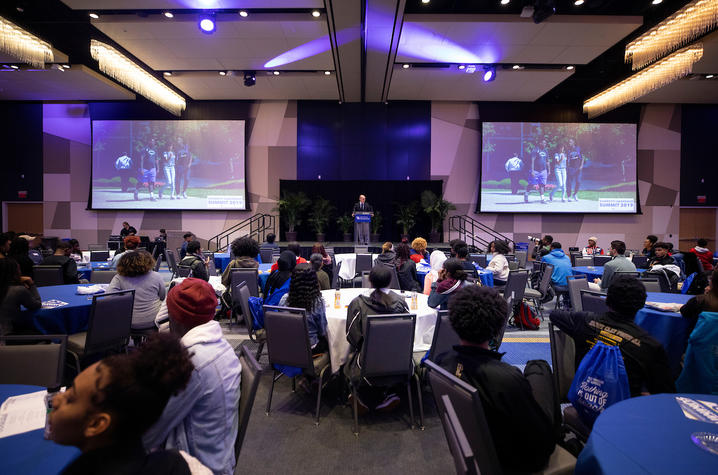 The following op-ed was published in the Courier Journal on December 26, 2019. Eli Capilouto is president and Sonja Feist-Price is vice president for institutional diversity at the University of Kentucky.

Seventy years ago, Lyman T. Johnson became the first African-American student enrolled at the University of Kentucky. He bravely opened doors that were closed to too many, for too long.

Earlier this year, in front of 500 community members at the banquet bearing his name, we shared excerpts from his biography - “The Rest of the Dream.” They are words darkened by adversity, but illuminated by hope:

As we think about our next steps in creating a community of belonging – a place where every voice matters – there is both promise and challenge to be found in Johnson’s admonition. The words apply today as much as they did decades ago when he wrote them.

Today, we still feel the sting of racism; our “differences” - often framed around race, identity, ethnicity and orientation - too often are used as a wedge between us, rather than points of distinction to collectively celebrate.

Tremendous progress has undeniably been made over the last several years at UK. But we’ve also experienced the disappointment of moments where our divisions seem to overwhelm us: where our efforts do not fully yield the results we desire.

Two recent conferences held on our campus reflect both the progress we’ve made as well as the work that remains.

Earlier this month, UK served as host for our first Diversity Leadership Summit, sponsored by our Martin Luther King Center and Office of Enrollment Management. More than 500 students from UK, other campuses and high schools across Kentucky came for a daylong series of conversations.

The mission: empowering students to improve their college experiences and provide prospective students with the opportunity to develop their cultural identity and leadership skills.

Only two weeks later, the "Higher E(d)quity Matters" Conference, sponsored by the Council on Postsecondary Education, took place on our campus. It featured speakers and sessions designed to help campus leaders cultivate environments of belonging, in part by examining barriers that students, faculty and staff still face in our shared journey.

These are examples of our collective commitment, across higher education in Kentucky, to ensure that all of our people—from all backgrounds, perspectives, orientations, identities and ideologies—know that they are valued.

And, indeed, we are proud of the progress we have made at UK:

A more diverse community is, ultimately, a stronger and more vibrant one.

This progress is encouraging, but we always have more work to do. In the words of Lyman T. Johnson, we must “not let the wagon roll back down the hill.”

For example, even as we are investing more money than ever toward hiring minority faculty - a consistent commitment - our results in this important area have been uneven.

Yet, we recognize that all students deserve to see people who look like them at the front of the classroom. Such diversity creates an even richer intellectual campus.

Moreover, our students should expect a place that does not tell them what to think, but instead teaches them how to think critically and communicate effectively. They can expect their goals and aspirations to be taken seriously, and they can expect their ideas to be refined, changed or strengthened.

That’s why conferences like these matter; they underscore our commitment to that work and to candid conversation.

The result will be a campus better equipped to enrich those communities we serve, and to uplift those around us. We will work together, not only to keep the wagon from rolling down the hill, but to ensure it continues an inexorable path upward and forward.