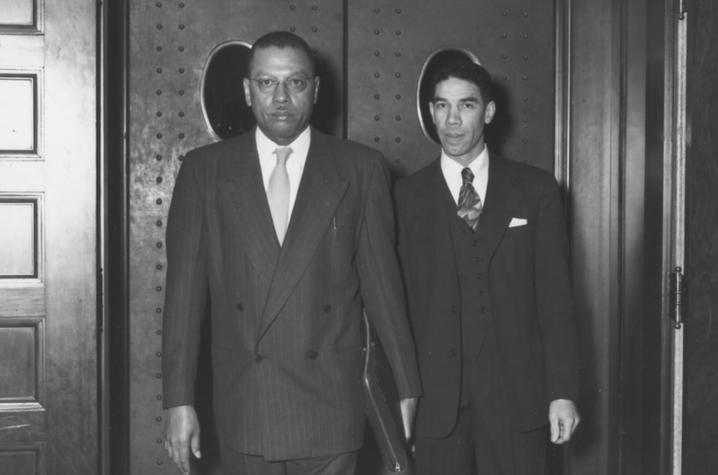 The following op-ed appeared in several regional publications throughout the end of February 2019. It was co-authored by President Eli Capilouto and Vice President for Institutional Diversity Sonja Feist-Price.

Seventy years of a journey that is still unfolding and evolving.

That is the story the University of Kentucky community is celebrating with particular reverence this month and throughout the next year.

It is the story of an institution intentionally striving to be a community of belonging, even while acknowledging that its evolution has not been a straight line of progress. It has been one of triumphs and trials, opportunities and obstacles.

The journey began with one man, who took one step.

In 1949, five years before the Supreme Court declared that “separate but equal” was anything but, Lyman T. Johnson became the first African-American to enroll at the University of Kentucky.

It was, by all accounts, a wrenching path. But 30 years later, Johnson was awarded an honorary doctorate from UK.

“It’s remarkable,” he wrote, “that so much has changed in the space of thirty years – from the time I forced my way into the university on a court order to the day the university gave me an honorary degree.”

His story reflects Dr. Martin Luther King Jr’s wisdom that “intelligence plus character—that is the goal of true education.”

On the issue of race – and what we describe as our journey to create a community of belonging – 70 years of integration calls out to us as both a moment of honor; it also is a challenge that reminds us of how much we still must do.

We have made undeniable strides.

Last month, Forbes magazine named the University of Kentucky among its Best Employers for Diversity. Forbes’ list, among other factors, recognizes employers who elevate their commitment to attracting and developing diverse talent and acknowledge diversity as an imperative pillar of success.

UK also received the Higher Education Excellence in Diversity Award and was named a Diversity Champion by INSIGHT Into Diversity magazine.  And, earlier this year, UK was declared a “Best of the Best” Top 30 LGBTQ-friendly college by Campus Pride.

But we know much remains to be done.

The gap in graduation rates between underrepresented minority students and others is still too large. It’s closing, but not quickly enough.

While we graduate more underrepresented minority students than any of the state’s public institutions, that gap has persisted.

As part of our commitment to access and affordability, we are creating new initiatives to address this issue. For example, through a new program – UK LEADS, which targets financial assistance to students who need it most – we’ve made significant strides in reducing unmet financial need. Of course, there is always more to do.

Now, we are attempting to take the same predictive models that target financial need and apply them to other issues, such as belonging.

For most of the last several years, our campus has grown increasingly diverse, numbers that have enriched our community and made us stronger.

But confronted by changing demographic trends in our state and our country – with potentially fewer children attending college – we must redouble our efforts to ensure that our campus reflects the diverse world that all of our students will enter and navigate upon graduation.

Moral and educational imperatives drive our fierce resolve to move forward.  But we know, too, that the global economy these students will enter after graduation is increasingly diverse and interdependent. To compete, and succeed, they must be able to navigate that world and embrace it.

And, as Dr. King’s words reflect, they must develop the knowledge and build the character to navigate it with empathy and purpose.

This responsibility underscores the value proposition of diversity and inclusion. Appreciating and creating relationships across our differences — the essence of grace — is core to learning and growing.

UK’s journey – like that of Lyman T. Johnson 70 years ago – is one of forward progress in the face of continued challenges. Its history is shaped by stories of transformation and depictions of halting, hard-earned efforts that took years to find success.

It is, of course, a journey on which our institution remains firmly fixed.

Our story demands that we acknowledge that progress on this path has not been a straight line.

There have been moments where we have, as an institution, not honored our aspirations. Those moments underscore the idea that building a community of belonging is a journey, not a project.