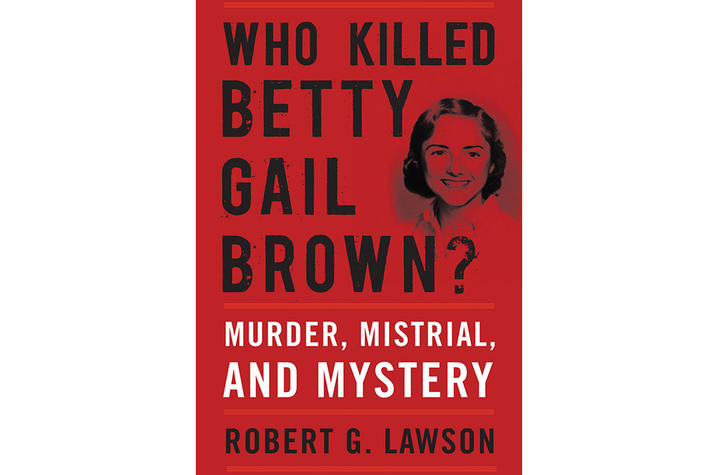 LEXINGTON, Ky. (Nov. 17, 2017) — On Oct. 26, 1961, the lifeless body of 19-year-old student Betty Gail Brown was discovered in front of the Old Morrison Building on Transylvania University’s campus. A new University Press of Kentucky book, “Who Killed Betty Gail Brown? Murder, Mistrial, and Mystery” by Robert G. Lawson, professor emeritus of law at the University of Kentucky, is the first book to examine Brown’s murder, investigation and trial, one of Kentucky’s most legendary cold cases.

Brown was found at 3 a.m. strangled with her own bra in the front seat of her parked car. No witnesses or suspects could be immediately found, but police would go on to take testimonies, administer polygraph tests and log the fingerprints of hundreds of students and persons of interest without ever finding motive for Brown’s murder.

The case grew cold until 1965, when an alcoholic drifter by the name of Alex Arnold Jr. confessed to killing Brown while visiting Lexington. Arnold believed so strongly that he was the culprit that he stated he was “99 percent sure” that he had committed the murder. Yet Arnold would never go on to serve time for the young woman’s murder.

Though the Brown case went to trial over 50 years ago, “Who Killed Betty Gail Brown?” is the first book-length investigation into the murder and subsequent trial. Lawson served as one of the court-appointed lawyers who personally defended Arnold, and he brings his intimate, firsthand knowledge of the case to bear. He supplements his knowledge of the events with courtroom testimonies, police records and news accounts to construct a chronological account of Brown’s famously unsolved murder and the trial of Arnold.

Lawson offers as complete an account as possible on a unique murder and bizarre trial that engrossed Kentuckians across the state. He also demonstrates how complex the law can be and how thoroughly lawyers, attorneys and police are willing to dig to get to the truth of a matter, even for a man who confessed to a brutal murder.

Despite his confession, Arnold was advised to enter a plea of not guilty until sufficient evidence could prove otherwise. Bystanders packed the courtroom daily, eagerly awaiting a guilty sentence — to no avail. Witnesses were unable to produce concrete evidence placing Arnold at the scene, and Arnold’s own unreliable memory due to his alcoholism left the answers to questions about the night of the homicide confused and inconsistent.

Ultimately, with no hard proof, the case was thrown out, and Arnold was never retried. In the years to come, new evidence and leads would surface only to grow cold again leaving Brown’s case unsolved.

Lawson lays out the facts in chronological order and presents only the information that the police knew at any given time, building suspense. This perspective allows readers to draw their own conclusions as the story unfolds and offers the opportunity to explore many possibilities regarding the murder. He includes photographs taken at the scene of the crime as well as diagrams of Transylvania’s campus. By doing so, Lawson puts the reader in the role of detective, heightening the intensity and demonstrating the pressure police officials were under to solve the crime.

Lawson’s personal recollections about the events of Brown’s case evoke the frustration and profound sadness at the loss of such a young woman. Through careful recreation of the murder, subsequent investigations and criminal trial, Lawson places the reader front and center to the events that play out from 1961-1966. Police have refused to give up on the case despite the large passage of time, and new evidence continues to come to light periodically (most recently in 2010). None of these leads have ever panned out, but as long as Brown’s case is open, police will continue to look for her killer.

Robert G. Lawson has been a law professor for 50 years at UK, where he served twice as a dean of the College of Law. He is the author of “The Kentucky Evidence Law Handbook” and “Beverly Hills: The Anatomy of a Nightclub Fire.”

Readers interested in meeting Lawson have several opportunities to attend book signings with the author in the coming weeks. First, he will participate in the Kentucky Book Fair from 9 a.m.-4 p.m. Saturday, Nov. 18, at the Alltech Arena at the Kentucky Horse Park. After the fair, Lawson has three more book signings already on the calendar. Those dates and locations are:

University Press of Kentucky is the scholarly publisher for the Commonwealth of Kentucky, representing a consortium that includes all of the state universities, five private colleges, and two historical societies. The press’ editorial program focuses on the humanities and the social sciences. Offices for the administrative, editorial, production and marketing departments of the press are found at UK, which provides financial support toward the operating expenses of the publishing operation through the UK Libraries.