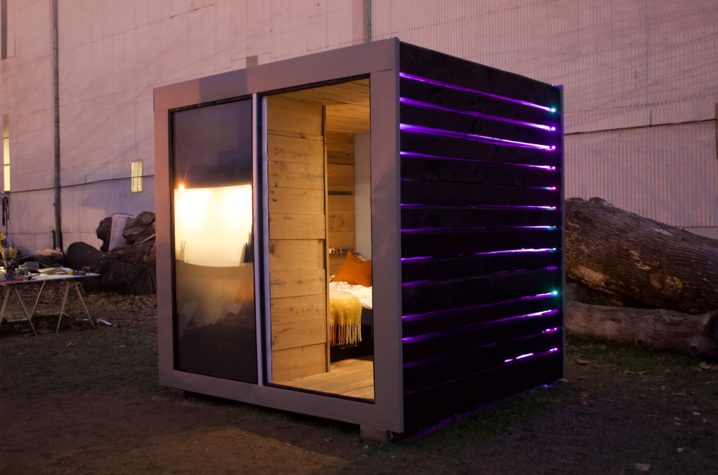 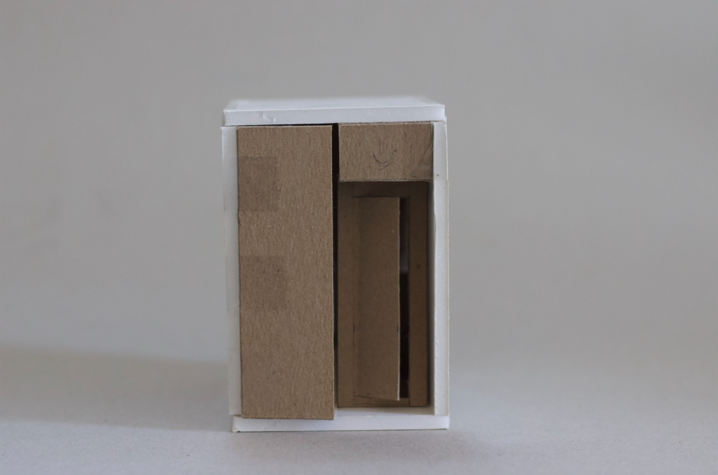 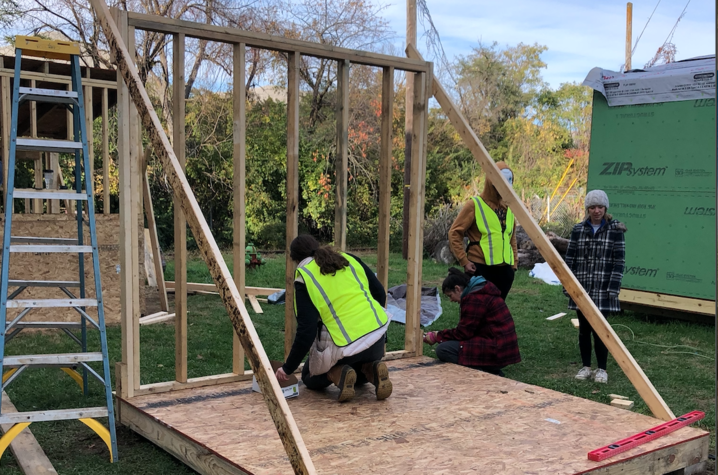 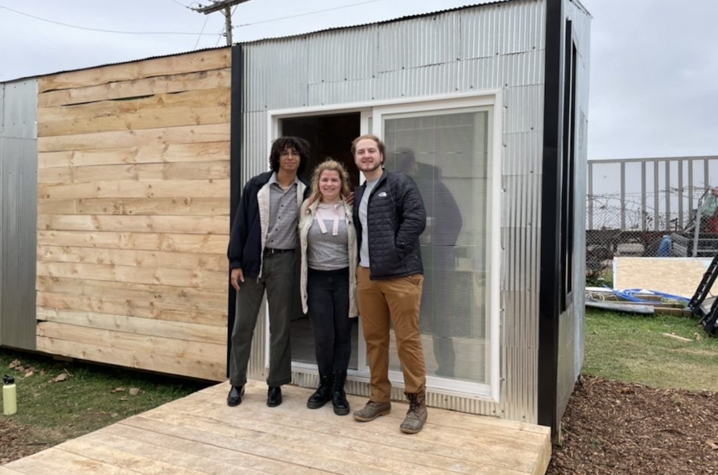 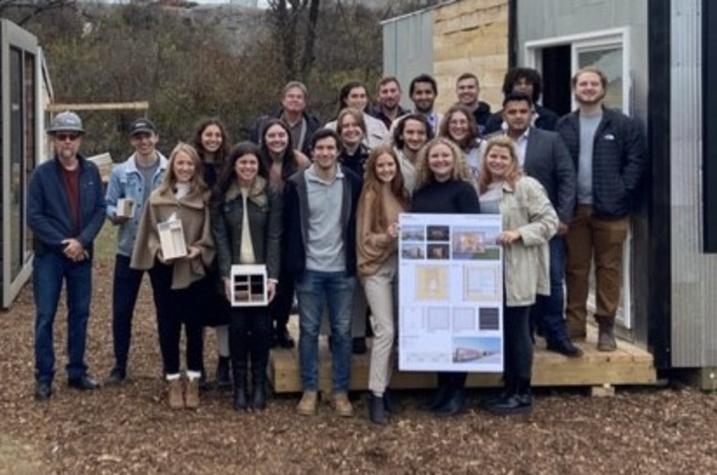 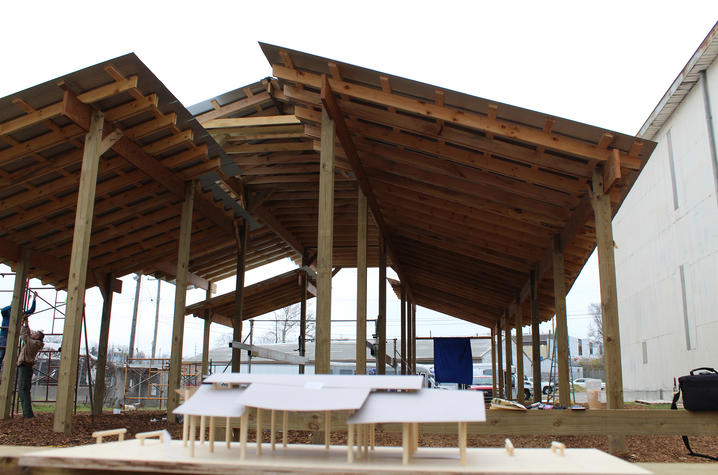 LEXINGTON, Ky. (Jan. 28, 2022) — Instead of a traditional lecture hall, a group of University of Kentucky College of Design students took to the field to learn from hands-on experience. As part of Bruce Swetnam’s design build studio, the students were tasked with not only designing, but building, full-size prototypes of their projects.

“The idea that you can learn, not just conceptually but learn with your hands and with your eyes and you can smell the project — it's a holistic way of learning,” said Swetnam, who is the Kentuckiana Masonry Institute Endowed Professor in the UK School of Architecture.

The class was split into two project areas between the 18 architecture majors in the studio — the development of a sawmill pavilion, and the exploration of various habitats that address different stages of houselessness. For both projects, the students were given a set budget, clients and deadlines, much like they would experience in their career field.

“This class was a really great learning experience, just because I feel like from now on, we are never going to design anything the same because we know the hiccups that we had to work through and how to fix them,” said Grace Butler, a fourth-year architecture major. “We even had to change our design a little bit just because of material issues or because of time, and it was really a great learning experience to battle those issues in a quick design setting.”

Within the habitat for the homeless projects, there were several different types of shelters designed, based on different stages of homelessness — which the students conducted thorough research on. The first was an 8'x8' shelter that included the bare basics of a bed and shelves that could be moved based on need — built and designed by Butler, Lauren Davis, Jackie Russell and Chloe Kelley. Their goal was to have a shelter that could provide privacy and storage but be as cost effective as possible. A much larger 8'x24' habitat, which included electricity and plumbing, was built and designed by Allyson Middleton, Greg Vergara, Joe Schulte and Justin Kirk.

“We have done some other design build projects, but until this project, everything had been very conceptual. Being in this experience, with the frustration and failure, but then to see the reward of those struggles has been amazing,” said Davis.

The shelter prototypes built by the students are currently in the process of being moved to Western Kentucky to provide aid to those affected by the tornadoes.

“It’s honestly a great feeling, knowing our hard work is being put to use in a community that really needs it. Our project was built for a purpose and to know it is being used for that is something we can pride ourselves on,” said Russell.

The second project area, a sawmill pavilion that provides shelter for the university’s new sawmill along with the tools and logs for projects, was completed by Lauren Major, Alan Hammell, Mohammed Aliessa, Chris Marra, Riley Day, Noah Martin, April Morris and Benjamin Rudloff.

“Normally we just stop at the drawing concepts of our ideas, but we actually got to see how the materials are constructed, how the materials go together and then what it takes for a building to be structurally sound,” said Major. “In the end our build looked almost exactly like our drawings, and we were super happy with how beautifully it came together.”

The sawmill pavilion will be used in future UK projects, and to help other students learn in a hands-on way.

All of the students agreed their success would not have been possible without Swetnam’s guidance and support.

“Well, the only way you can be a good mentor is if you have really great mentees. They have all been such a joy to work with. Everybody showed up even in adverse conditions. Everybody was eager to learn and we were we were all in this together,” Swetnam said. “Every one of these students has embraced this idea of using their talents in architecture to serve the community in one way or another. I think that's one of the most rewarding things we can do as architects.”

The class, and their projects, were made possible by a number of funding partners, including Franklin Gray with Gray Construction, a Sustainability Challenge Grant from UK, Coca Cola and the Kentuckiana Masonry Institute. Sustainability played a huge role in the thought process of the students’ designs; a large majority of the wood used in the projects was milled from trees removed from campus whether due to construction or disease.

The Fall 2021 design build studio class ended with a showcase, which allowed the students to celebrate their hard work with community partners.

“I am so proud of not only our group, but all of the other groups and their projects,” said Major. “Everyone was incredible we all worked so well together, and I think it's because of the attitude that Bruce brought to the site. He encouraged all of us to do good, treat others well and do your best and he was proud of us, and I think that's the best feeling. He truly did more than teach us. He became our biggest supporter.”