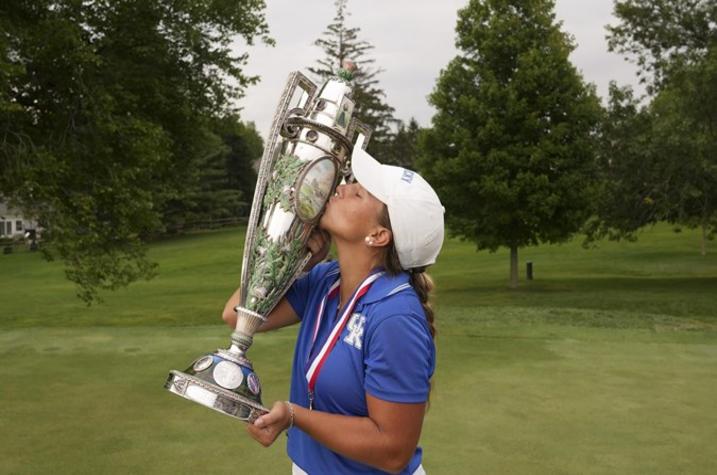 The Kentucky women's golfer defeated Arizona's Yu-Chiang (Vivian) Hou 2 and 1 on Sunday to win the 2021 U.S. Women's Amateur. Castle came out victorious in the 36-hole championship match to capture the national title for amateurs and join an elite list of some of the game's greatest players to hoist the Robert Cox Trophy.

"Still hasn't registered," Castle said. "It feels like just another tournament, but then I step back and I'm like, this is a USGA event with so much history, and I just can't imagine."

The junior-to-be at Kentucky navigated this week through a field of 156 players and captured one of the final two spots from stroke play in a 12-for-2 playoff to make match play and then defeated some of the nation's best amateur golfers at the Westchester Country Club's West Course (par 72, 6,488 yards) in Rye, New York.

On Saturday, she knocked off last year's U.S. Women's Am stroke-play medalist, the 2021 NCAA individual national title winner and the consensus national collegiate player of the year, Rachel Heck. And then Sunday, playing Hou, the 2020 Women's Golf Coaches Association Freshman of the Year and the former No. 1 player in the World Amateur Golf Rankings, she flexed her muscles with a complete performance.

"(Hitting) fairways and greens (in regulation) was all I thought of and here I am holding this heavy trophy," Castle told the Golf Channel moments after her clutch putt on hole No. 17.

With the win, Castle has clinched a spot on the eight-woman 2021 USA Curtis Cup Team that will face Great Britain and Ireland in Wales later this month, Aug. 26-28. She is also now exempt for the next 10 U.S. Women's Amateurs and earned invitations to the 2021 Women's British Open and the 2022 August National Women's Amateur. By making Sunday's finals, Castle already clinched a spot in next year's U.S. Women's Open after qualifying as an amateur this year.

"I can't even begin to describe how excited we are and how unbelievably proud we are of Jensen," UK head coach Golda Borst said. "This is an amazing accomplishment, and she is so very deserving. She earned this win the whole way and what a way to do it. Jensen's passion for the game was on full display and the whole country got to see the strong competitor that we get to work with every day. We are lucky to have Jensen and so, so happy for her. Wow, what a win."

Assistant coach Brian May made a surprise last-minute trip to see the championship match.

"I had no idea he was here," Castle said. "I heard (Hou's) coach flew up last night to watch. I was like, 'Ah, that's so nice.' And then I finished 18 and my caddie was like, 'Hey, I think Brian is here.' I'm like, 'Brian who?' He comes walking around the corner. It meant so much to me just having Coach here. Even the last day."

Sunday's match was a rollercoaster ride from start to finish.

As she did on a number of occasions over the course of six straight match-play wins this week, Castle fell behind Sunday and had to battle back from early adversity. Hou was 2 up after the first 18 holes, but Castle came back from about an hour-and-a-half break with new life.

Castle won three of the first four holes in the afternoon round to quickly turn a two-hole deficit into a 2-up lead. With Castle's length advantage off the tee, her precision with her wedges and a handful of clutch putts, the Kentucky Wildcat continued to put pressure on Hou and went 3 up with seven holes to play.

But it wasn't over.

Castle appeared to have the upper hand on the par-5 12th — the 30th hole of the day — when she went for it in two shots and landed just short of the green. Hou was in trouble short and below the green in the rough, but the Arizona Wildcat got out of jail with a fantastic third shot and a tap-in for birdie. Castle elected to chip her third shot instead of putt and it came up considerably short. She missed the birdie putt to lose the hole and suddenly momentum swung the other way.

Hou won the next hole when Castle missed well short on her approach and Hou birdied. Just like that it was a one-hole match with five holes left.

Castle halted Hou's momentum with a two-putt par on the difficult par-3 14th to halve the hole and then won the 15th with a par to go 2 up with three holes to play.

It was the exact same setup Castle found herself in Saturday in the semifinals match vs. Heck, but Castle wasn't going to let that scenario play itself out in reverse. After Hou cut Castle's lead to 1 up with a birdie on the par-3 16th, Castle closed the match with a confident birdie stroke on No. 17.

The ball she rolled in was the same Kentucky logo ball she used for her last five matches.

"I had one hour and 45 minutes of sleep (on Saturday) night," Castle said. "My watch tracked it. I don't know if I'm going to be able to sleep tonight either, but I think we're going to leave at 4 a.m. (Monday) to head home and I have work Tuesday morning at like 5 a.m. (at Columbia Country Club) so I should probably get some rest in between those days."

Played annually and organized by the USGA, the U.S. Women's Amateur has been played since 1895, but Castle's run was one of the most improbable with all that she overcame.

After helping Kentucky to the NCAA Championship Finals in May, the program's first appearance since 1992, Castle appeared in the U.S. Women's Open as an amateur, but a stress fracture she suffered in one of her ribs began to cause problems.

Castle played through the injury to win a second straight Carolinas Four-Ball Championship with Wake Forest's Rachel Kuehn at the beginning of July, but the injury persisted and Castle had to withdraw from several summer tournaments. She wasn't cleared to swing a club until early last week.

With no expectations heading into this week's event given the lack of recent play, Castle got better and better with each round. She opened the stroke-play portion of the tournament behind the proverbial eight ball with a 79 and needed to make a big comeback to even make match play. Castle did just that in the second round with a 71 to join a 12-for-2 playoff. She and UK teammate Marissa Wenzler birdied the first hole of the playoff, and the momentum rolled forward from there.

Castle knocked off the bracket's No. 2 overall seed in the first round 3 and 2, won her round of 32 match 1 up, and then rolled 4 and 2 Thursday afternoon and 6 and 5 in the quarterfinals.

Playing Saturday in the semifinals against the nation's undisputed top player in the country during the 2020-21 collegiate season, Castle rallied from 2 down with three holes to play to beat Heck, the ranked No. 2 in the world, on the 19th hole.

Castle said the lack of expectation she had coming into the event played a big part in her conquest this week.

"I didn't even think I would make the cut," said Castle, ranked No. 248 in the latest WAGR. "Didn't pack enough clothes and here I am re-wearing the same outfit and making it to the final day."

Castle came to Kentucky as the most decorated signee in program history. She has been as good as advertised with 17 appearances in two seasons, seven top-20 finishes and a 73.6 stroke average. She led the 2019-20 team to two championships while setting the program's single-season scoring record with 71.9 strokes per round as a freshman.

Teammates Wenzler and Laney Frye also participated in this week's event in New York. Wenzler fell in Thursday morning's round of 32 to end a marvelous two weeks for the junior-to-be. She won both the stroke-play and match-play portions of the Western Women's Amateur to finish July and then knocked off Kuehn in this week's event, the top seed in match play. Frye, an All-Southeastern Conference performer as a freshman this past season, advanced to match play but lost in the first round.

UK's three representatives to start the tournament tied for the second most in the field. Only Stanford, with four players, featured more players to start the event.

Kentucky's 2021-22 schedule was released last month. Returning all five players — including Castle — who qualified and played in the NCAA Championship Finals, the Wildcats will play in nine regular-season events before the SEC Championship and postseason play. After navigating through the COVID-19 pandemic, UK will return to a traditional schedule with four tournaments in the fall, four in the spring, a head-to-head matchup with rival Louisville and then the postseason.