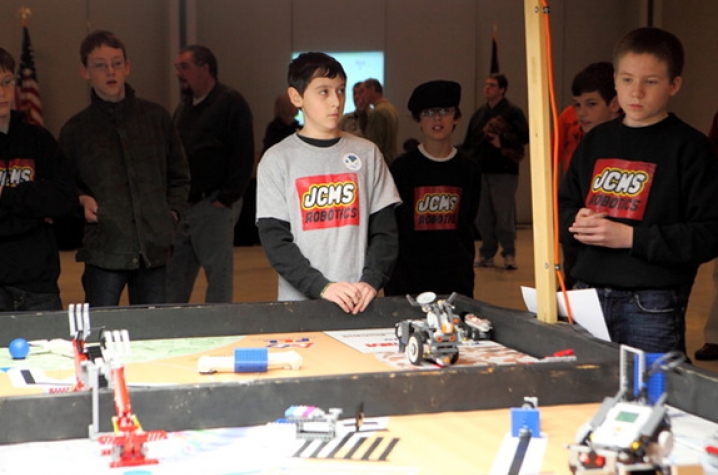 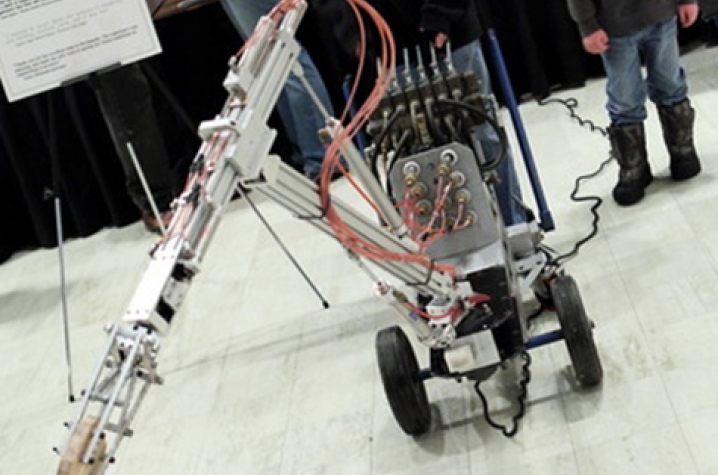 LEXINGTON, Ky. (Dec. 14, 2010) — On Dec. 4, 125 Central Kentucky elementary and middle school students gathered in the University of Kentucky Student Center Grand Ballroom to participate in the 2010 FIRST LEGO League (FLL) Body Forward Challenge, where they explored how engineering meets medicine through a research project and high-energy robot game, using a LEGO robotics kit. Exhibitors from Lexington Christian Academy and Newton's Attic (a local non-profit) were on hand to demonstrate practical, real-world applications of robotics and to highlight future opportunities for robotics education throughout the community as the students progress through the FLL program.

"It is heartening to see the same coaches and teachers return year after year bringing new faces and new energy into an extracurricular program that is both exhausting and rewarding," said David Feinauer, a graduate assistant in the UK College of Engineering. "Students who have out-grown the program’s age limit reappear in surprising new roles as volunteers and mentors. One of our inaugural teams has gone on to host their own regional event as participation has expanded. To me, the most revealing description of the event’s success is the number of participants and volunteers that have become mainstays in the FLL program."

Prior to 2004, students in Kentucky wishing to participate in the FLL challenge were predominately located in the northern part of the state. Without any opportunities to attend a Kentucky event, these teams travelled to competitions organized by an Ohio based non-profit. With the help of that organization, a Kentucky-based tournament system began in 2004. UK and the College of Engineering, along with engineering professor Bruce Walcott and Feinauer, organizers of the local event, have hosted competitions for the community since that time.

In the Central Kentucky region the program has grown from less than a handful of teams to as many as 15 last season. This expansion has occurred state-wide with approximately 85 teams participating in five regional competitions this year. As past FLL students have moved into high school, the state-wide interest in robotics has continued to grow. A telling example of this growth is the expansion of Kentucky teams participating in FIRST® high-school level robotics programs from 1 team a few short years ago to roughly 25 teams this season. A trend that the organizers of the UK-based event hope will translate to an increased interest in science, technology, engineering and mathematics at the post-secondary level.

About FIRST
Accomplished inventor Dean Kamen founded FIRST (For Inspiration and Recognition of Science and Technology) in 1989 to inspire an appreciation of science and technology in young people. Based in Manchester, N.H., FIRST designs accessible, innovative programs to build self-confidence, knowledge and life skills while motivating young people to pursue opportunities in science, technology and engineering.