LEXINGTON, Ky. (Aug. 24, 2018) — As students, faculty, staff and visitors enter Memorial Hall this fall it is highly likely their eyes will be drawn upward to a new creation in the dome at the building’s entry.

The gold-leafed artwork, “Witness,” which features African-American and Native American images, hopes to shine new light on many misrepresented Kentuckians from the state’s history. While this work was just completed last week by Philadelphia-based artist Karyn Olivier, the displaced figures depicted in the new art should be familiar to those who visit Memorial Hall regularly.

A horse carriage driver, a young child in a tree, musicians providing entertainment, four  figures planting, three figures working land, two sitting near a pond, several at the train station, and a lone Native American with a hatchet — these images are all elements of a 1934 mural created by Ann Rice O’Hanlon for the Public Works of Art Project, part of President Franklin D. Roosevelt’s New Deal. They have also been the subject of controversy and one of many topics in important discussions on inclusion on the University of Kentucky's campus.

While O’Hanlon’s mural was recognized as a unique document of a time in U.S. history when the government engaged artists to create ambitious acts of American storytelling, many argued that the artwork misrepresents and sanitizes the imagery of the time it depicts. In doing so, it failed to declare the immorality of slavery and minimized the violence and inhumanity that many experienced through subjugation and slavery.

Olivier’s piece was commissioned to provide a thoughtful dialogue with the controversial mural following a call for artwork last year by the Memorial Hall Art Committee. The committee, co-chaired by UK Art Museum Director Stuart Horodner and Associate Vice President for Institutional Equity Terry Allen, recommended selection of the work to President Eli Capilouto based on campus presentations given by Olivier and artist Bethany Collins, and feedback from members of the university community, particularly students.

“But to me it was how can I dive in and understand what my own perspective of the mural is. How do I take what is known, how do I use what’s literally and physically and concretely in the mural and make adjustments or make rearrangements or change the context to hopefully allow another reading of that mural and what it means today in 2018? Especially in conversation with where we are in the debate about Confederate monuments. … How do I kind of make work that is nuanced and complex and that doesn’t solve any problems, but actually allows for us to really dig in and flush out all of this?”

Using the entry’s transitory space as a threshold to speak to the viewers before they take in the mural, Olivier inserted the subjugated figures on the gilded ceiling reinforcing the notion of rebirth — perhaps spiritually. Olivier noted the use of gold leaf is often seen in sacred paintings, churches and cathedrals from the Byzantine and Renaissance periods. The placement of the figures serves to elevate the oppressed from "the lowly to the divine."

Around the base of the dome the artist added a Frederick Douglass quote, “There is not a man beneath the canopy of heaven, that does not know that slavery is wrong for him.”

Through the exalted nature of this imagery the artist hopes it prompts viewers reinvestigation, interrogation and reckoning with our country’s complex histories.

And Olivier, who worked with artist Jay C. Lohmann to bring the artwork to life, also acknowledges the golden dome might make one think of gold and how slaves were considered a commodity. She hopes that these interpretations will lead to further examination and maybe even the classroom where the art might spur conversations on religion, race, politics, history, economics and more.

“You can have your initial reaction to it, but my hope is that there is enough there in the specificity but also in the juxtaposition and contextualization that’s going to allow different readings based on the moment. Maybe something happens on campus that is charged that could point to something here. So, I’m hoping it’s a teaching tool. I feel my role as an artist … is supposed to be a catalyst. Artwork is supposed to be a tool, it’s supposed to be an instrument,” Olivier said.

In addition to Olivier’s new perspective on the subjugated figures in O’Hanlon’s mural, the artist has included new images — portraits of important individuals in Kentucky's history — that fill the four medallions surrounding the dome. They include: Chief Red Bird, a Cherokee who lived among white settlers in Clay County until his murder by two Tennessee men; Charlotte Dupuy who was an enslaved African-American woman who filed a freedom suit in 1829 against her master, Henry Clay, then the country’s secretary of state; Peter Durrett, a preacher who founded First African Baptist Church in Lexington in 1790; and Georgia Davis Powers, the first African American to serve in the Kentucky Senate, sponsoring bills prohibiting employment discrimination, sex and age discrimination. Dupuy and Durrett are depicted in silhouettes as no known imagery existed of these historical figures.

“They are significant figures that haven’t gotten as much due as they should have, so it seemed to make sense to have a more recent history revealed,” Olivier explained.

Seeing this commission completed, the committee is pleased with the results. "Terry Allen and I are very proud of the hard work and candid conversations with our committee members and others in our community that lead to the realization of this work by Karyn. It is very challenging to combine sensitivity and audacity in public art, and we believe that 'Witness' gives us a profound pedagogical asset for further conversations about history, race, representation and inter-connected subjects," Horodner said.

And how does the artist hope viewers will respond to “Witness.” “I think the piece will fail if it’s one thing,” Olivier said. “I want people to be reminded that all we have is our humanity. If we don’t have our agency, if we are not named by someone else, how do we exist as a culture, how do we exist as a people? … I’m hoping seeing this repositioning would allow an individual intimate experience with it, but also ask what does it say about who I am as a citizen of the world. I want my work to kind of remind us that we have to be engaged citizens, that doesn’t mean holding up a protest sign, but it might mean not making assumptions about someone who is different than we are.”

Upon completion of the UK artwork, Olivier was scheduled to travel to Italy as a Rome Prize winner. She is one of only five visual artists to be recognized with this honor by the American Academy in Rome. 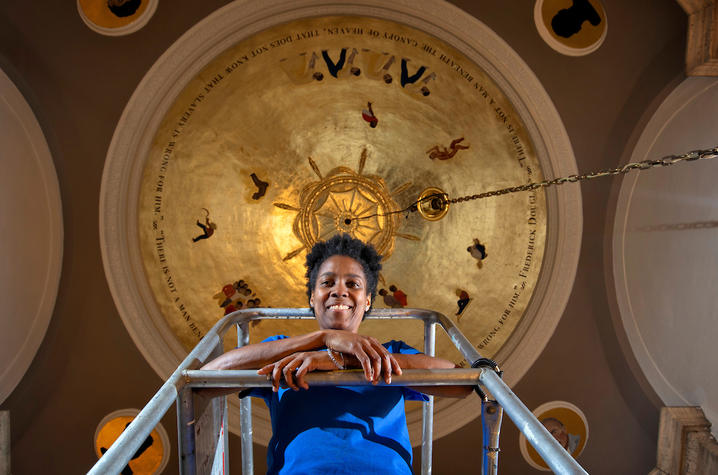 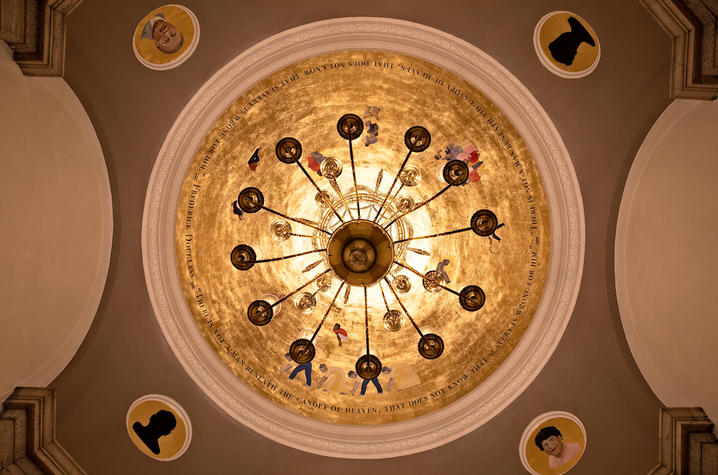 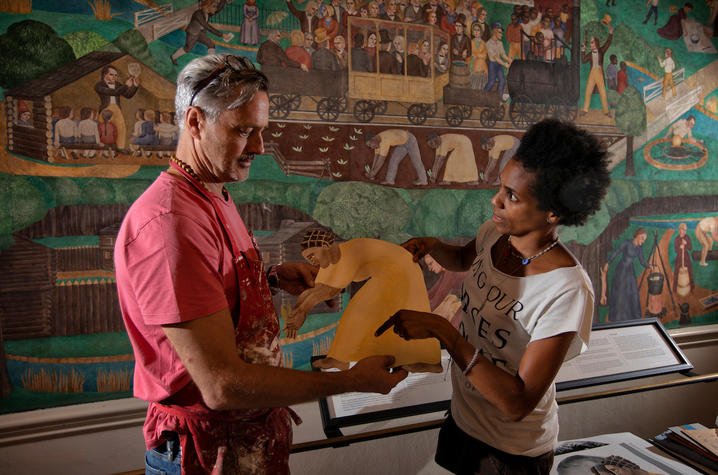 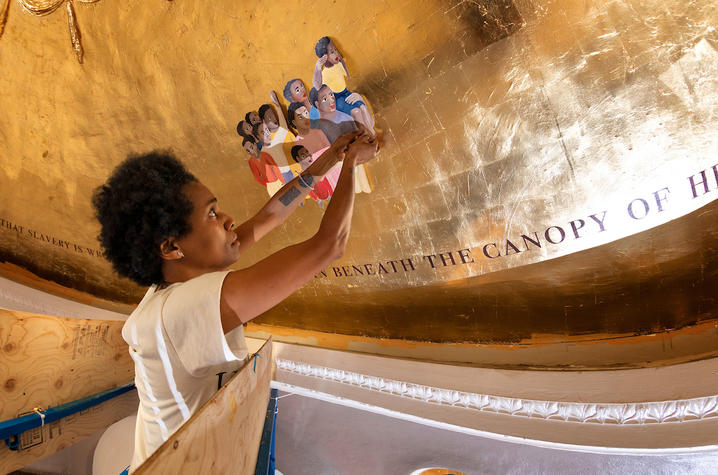