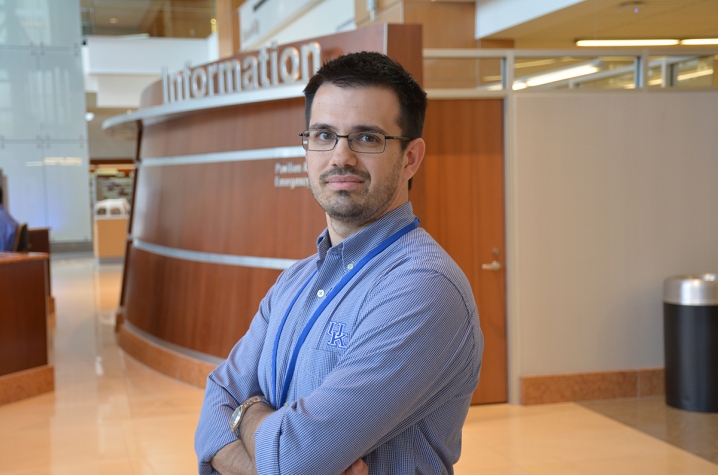 LEXINGTON, Ky. (Feb. 10, 2015) -- University of Kentucky College of Pharmacy alumnus Doug Oyler knew he was interested in academic pharmacy. So when faculty members Jeff Cain and Peggy Piascik recruited him to serve as the College’s inaugural Teaching Fellow, he jumped at the chance.

But if you know anything about Oyler, paving his own path has become a trademark.

A Louisville native, Oyler was the first in his family to pursue a career in health care. He had always enjoyed science – particularly chemistry – and entered UK for his undergraduate coursework. After two years as an undergraduate here at UK, he enrolled in the UK College of Pharmacy to pursue his doctor of pharmacy (Pharm.D.) degree, which he received in 2010.

After working in internal medicine at UK Good Samaritan Hospital for a few years, he knew he needed to pursue a residency to fulfill his ultimate goal of becoming an academic pharmacist.

“I knew wanted to pursue a faculty position,” said Oyler. “And I knew that I didn’t want to work for just a college of pharmacy – I wanted to work for a prestigious type of university that was known for its innovations in the classroom, practice settings and in research. To me, there was no better place to pursue that dream than by completing a UK HealthCare Pharmacy Residency.”

Oyler became R#407 in the UK HealthCare Pharmacy Residency program in 2012. He conducted a postgraduate year two residency in critical care in 2013.

During that time, he saw an interesting email from pharmacy faculty members Cain and Piascik. UK College of Pharmacy Dean Tim Tracy had recently challenged faculty with developing big ideas that would help re-think the manner in which colleges of pharmacy conducted their business. Cain and Piascik wanted to reach down into the UK curriculum and get undergraduate students more interested in a pharmacy career earlier in their academic careers.

And as Piascik says, their goal was three-fold.

“We wanted to make UK undergrads better health consumers,” says Piascik. “We sought to educate them about pharmacy and hope to interest them in a pharmacy career. And we wanted to stay connected to our pre-pharmacy students and retain them as they work through program pre-requisites.”

Thanks to some financial support from the College’s Transformative Grant program, the Academic Teaching Fellow was born, and Oyler was named the first fellow.

In fall 2014, Oyler taught the first semester of PPS 101, “Pills, Potions and Poisons.” The College chose to cap that online course at 30 students to allow Oyler time to figure out how best to teach this new course.

Oyler designed the course to be an informative and eye-opening introduction to field of pharmacy. Various guest speakers were featured throughout the semester, introducing the students to a wide-array of practicing professionals in various pharmacy fields. The course featured no recorded lectures. Students would read various pamphlets and journal pieces, watch videos and complete assignments each week.

“My goal was to create an environment that was fun, challenging and appealing,” Oyler said.

It appears he is on to something. When a larger, 50-seat class opened for spring 2015, the course filled immediately.

“The demand for the courses is higher than expected,” says Cain. “The roster fills immediately when registration opens.”

“It is only the second semester of offering the first course, but so far, we are pleased,” Piascik said. “The first course is an overview of pharmacy and pharmacy-related topics. The second course will focus on dietary supplements and the third course will be about drugs of abuse. So far, the work, creativity and enthusiasm of our fellow and student teaching assistants has far exceeded my expectations.”

The future for Oyler also seems bright. His experience as a teaching fellow has broadened his knowledge of teaching and, perhaps, most important increased his passion for dispensing new knowledge.

“I am not sure higher education has done a great job of teaching people how to teach,” said Oyler. “This fellowship is doing that. Though I don’t know where my future will lead me, I know that this experience will bridge a gap in my training.”