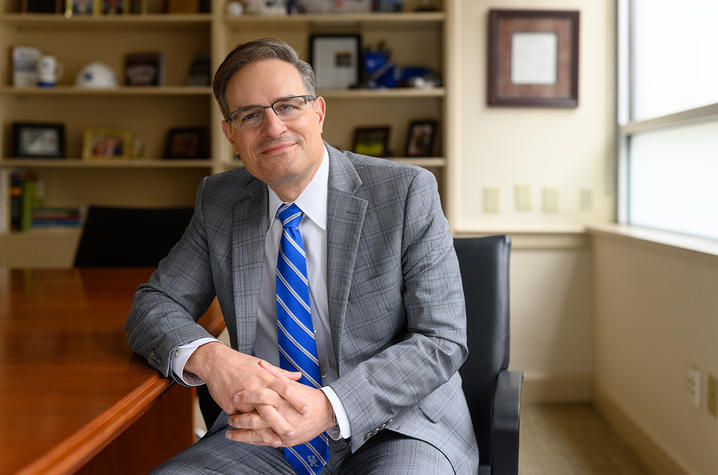 LEXINGTON, Ky. (May 14, 2021) — University of Kentucky President Eli Capilouto on Friday announced that he has selected College of Medicine Dean Bob DiPaola to serve as acting provost.

DiPaola will begin his duties as acting provost July 1 for a one-year appointment until June 30, 2022. Capilouto has announced he will begin a national search for a permanent provost this fall.

DiPaola “is a highly regarded leader who has successfully engaged multidisciplinary groups for initiatives in research and education,” Capilouto wrote in an email to the campus Friday afternoon. “His collaborative approach and commitment to shared governance — working alongside outstanding faculty, staff and learners — has led the college to unprecedented growth and progress in recent years in many ways that have led our institution in advancing our mission.”

“The opportunity to serve the University of Kentucky in this capacity is more than an honor, it is a privilege,” DiPaola said. “Our focus on the four-part mission — education, research, care, and service — paired with our college’s model of shared governance have prepared me well for this position. I look forward to working alongside campus leadership to fulfill our responsibly as a land-grant institution.”

Current Provost David W. Blackwell announced in January that he would end his tenure as UK provost June 30 as he is pursuing a presidential appointment at another university.

DiPaola came to UK and the College of Medicine in 2016 after previously serving as director of the Rutgers Cancer Institute of New Jersey. Under his leadership the College of Medicine has significantly accelerated and grown its research agenda, developed innovative education and service programs and strengthened commitments to diversity and inclusion.

Specifically, under DiPaola’s tenure, the UK College of Medicine has:

“The START team has been vital to our successful work,” Capilouto wrote to the campus. “His leadership of this committee will help ensure continuity, while prioritizing health and safety as we return to post-Covid operations.”

Even though Dipaola will not formally begin in this new role until July 1, Capilouto said DiPaola will soon begin meeting people across the campus so that he can hit the ground running.

“This is a special community,” Capilouto wrote to the campus. “I am gratified during a weekend that reminds us all of why we are here to be able to serve with such capable and committed people.”