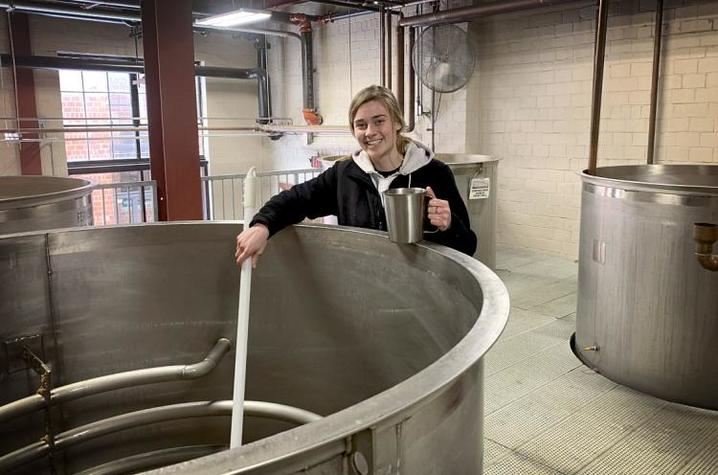 Alexa Narel is taking mash samples as part of her internship with James E. Pepper Distillery in Lexington, Kentucky. Photo provided by Narel.

LEXINGTON, Ky. (Feb. 25, 2021) — Alexa Narel remembers growing up in a household steeped in the history and tradition of the spirits industry, but in the middle of her pursuit of a certificate in distillation, wine and brewing studies at the University of Kentucky, she found herself struggling to afford her education. That’s when she learned about a unique scholarship funded by a former president of the UK Alumni Association, Hank Thompson, and his wife Kathy.

Narel would often sit with her father in his office looking at a wall full of interesting bar taps and neon bar signs from his career and travels. Her favorite was a Johnnie Walker Red sign he saved from a flooding basement in his teenage years. He told her stories of the restaurants with bars that he owned and the souvenirs he collected.

“My father passed away in 2013, but he left me with a passion for the spirits industry and his scotch collection,” she said. “After losing my dad, my mom managed to support my brother and me fully on her own until she was diagnosed with cancer in 2016. She worked full time while undergoing treatment for as long as possible, but eventually that was no longer physically possible. I would never be where I am today without the unwavering support of my parents, and they would be eternally grateful to know that the Thompsons played such a large role in my success.”

The Hank and Kathy Thompson Scholarship Fund was created specifically to aid students pursuing studies and careers in the spirits industry. The Thompsons graduated from UK in 1971. Hank Thompson’s father managed three distilleries in Frankfort, so he grew up in the industry. They wanted to find a way to honor his father’s legacy.

“We’ve always had a soft spot in our hearts for the distilling business in Kentucky,” Hank Thompson said. “As we approached the time in our life that we were able to start giving back, we approached UK through the Alumni Association to see how we could help students with the same passions about the spirits industry that we share.”

Narel is a senior in the UK College of Agriculture, Food and Environment studying food sciences and earning the Distillation, Wine and Brewing Studies Certificate. She’s already had an internship with Bell Flavors & Fragrances, the makers of the flavoring in Fireball Cinnamon Whisky. This semester, she is interning with James E. Pepper Distilling Company in Lexington.

“Being exposed to the process of creating a spirit gave me a new appreciation for the industry,” she said. “When I graduate, I would like to work in research and development for a large-scale, beverage alcohol company. This scholarship moves me one step closer to finishing my degree and the certificate and hopefully entering the industry to start my dream career.”

UK Professor Seth DeBolt, director of the James B. Beam Institute for Kentucky Spirits, said gifts like the Thompsons’ are large contributors to student success. The Beam Institute is in the process of building a distillery and maturation facility on the UK campus to serve as a living, learning environment for students like Narel.

“We’ve got about 150 students in the certificate program right now,” DeBolt said. “Because of distance learning, we have students from all over the country enrolled. We are really starting to gain some significant attention. Scholarships like this help make education a reality, and I think it’s a wonderful legacy.”

Narel, from Des Plaines, Illinois, is the second recipient of the Thompsons’ scholarship. The first student was Tyler Thompson (no relation). Tyler began his college career as a nursing student, but after taking a job at a distillery in his hometown of Loretto, Kentucky, he realized he wanted to work in the spirits industry. He landed in the bottling house at Maker’s Mark, then as a night-shift distillery mill operator. But he could not shake the feeling he needed to go back to school. Tyler talked to DeBolt about the certificate. After hearing his story, DeBolt thought he might be a good fit for the Thompsons’ scholarship.

“Everything they told me about what they wanted in a recipient — I talked to other people in the program — and Tyler was at the top of the list. This was the type of student they wanted to support,” DeBolt recalled. “Being able to impact a student’s life at that age and trying to juggle so many things, it’s honorable indeed.

“It’s good to be able to offer students like him a formal education in an area where they are already employed. It allows them to reach their career dreams. I’m glad we could help Tyler this year. It’s really great to give people all the help they can get.”

The Thompsons are happy about both recipients. They feel the students were a perfect fit for what they hoped to do with their gift.

“It's very meaningful for us to do this,” Kathy Thompson said. “My aunt and uncle didn't have children. Their estate funded an endowment to the business school. I’ve seen how they have been able to impact their scholarship recipients. It means so much for us to be able to do something similar for Tyler and now Alexa.”

“It's tremendous when you put a face and a life with your gift,” Hank Thompson added. “You realize these students have interesting backgrounds and meeting them just brings the donation to life for us.”

The Hank and Kathy Thompson Scholarship Fund is open to students attending UK from Jefferson County or who are pursuing education in distillation and have exhausted their efforts for financial assistance.