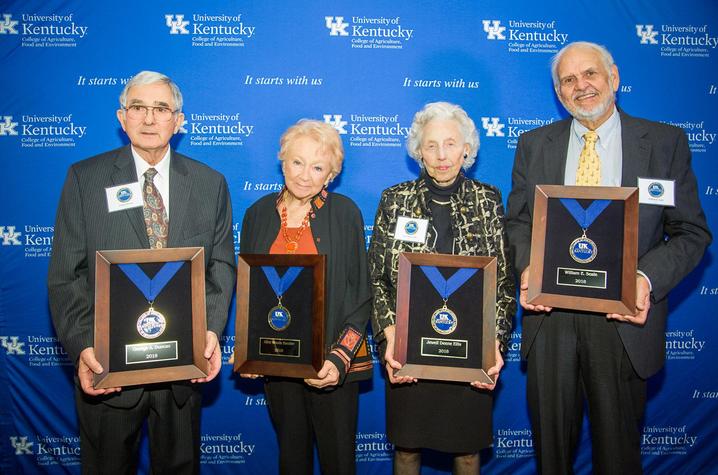 LEXINGTON, Ky. (Jan. 23, 2018) - The University of Kentucky College of Agriculture, Food and Environment recently inducted five new members into its Hall of Distinguished Alumni. This year’s recipients include a farm advocate, an engineer, two economists and a family and consumer scientist.

Alice Baesler, of Lexington, received her degree in home economics from UK in 1963 before embarking on a lifelong journey of influencing issues and programs that affect agriculture. She started her career teaching before joining the Kentucky Department of Agriculture where she led the state’s Agriculture in the Classroom program. Baesler is a leader on farm labor issues and co-founder of the Kentucky Women in Agriculture organization. She continues to operate the family farm today and is part of the state’s hemp research efforts.

George Duncan’s career as an agriculture engineering specialist in the college spanned five decades. He left a lasting legacy through his engineering expertise and his devotion to the 4-H youth development program. A Lexington resident, Duncan helped the tobacco industry transition from the time-consuming, hand-tying packaging system to bales – ultimately saving farmers time and money. He also holds three U.S. patents for various tobacco-related equipment. Duncan, who earned three degrees from UK, was also noted for his role in developing the first computer project for 4-H.

Jewell Deene Ellis, of Danville, received two degrees in family and consumer sciences education from UK before embarking on a 57-year career in education. She spent nine years in secondary education before becoming teacher-trainer for Murray State University. In 1971, she moved to the Kentucky Department of Education, where she took on a wider role in vocational education for the state, serving in a variety of leadership roles until her retirement in 2008.  Among her accomplishments is the development of the first national standards for family and consumer sciences education. She was also co-founder of the Family and Consumer Sciences Education Coalition, an advocacy and public policy alliance.

A three-time UK graduate, William E. Seale, of Annapolis, Maryland, worked in the education and financial sectors for nearly 40 years. He taught in the community college system, was a county extension agent and served on the staff of a U.S. senator before becoming vice president of a futures exchange. Former President Ronald Reagan appointed Seale as commissioner of the Commodity Futures Trading Commission. He later joined the faculty at George Washington University, serving as chair of the finance department and senior associate dean of the business school. Seale then founded the ProFunds Group, a mutual fund investment firm. He remains a principal in the firm.

The late Dallas Milton Shuffett received three degrees from UK. In 1953, he joined the college to begin his teaching career as an assistant professor in agricultural economics and continued to move up the ranks to associate professor and professor. He served as vice chair and chair of the Department of Agricultural Economics and was the college’s associate dean for research and associate director of the Kentucky Agricultural Experiment Station from 1987 to 1992. Shuffett’s expertise was in tobacco policy during a time when tobacco was the leading crop in the state. He was one of the world’s top specialists in this field. He was also a mentor to many students and was honored by one of those students who endowed a scholarship in his name. Shuffett died Jan. 13.

The annual Hall of Distinguished Alumni induction is a joint program of the College of Agriculture, Food and Environment Alumni Association and the college. It is the highest alumni award the college bestows.