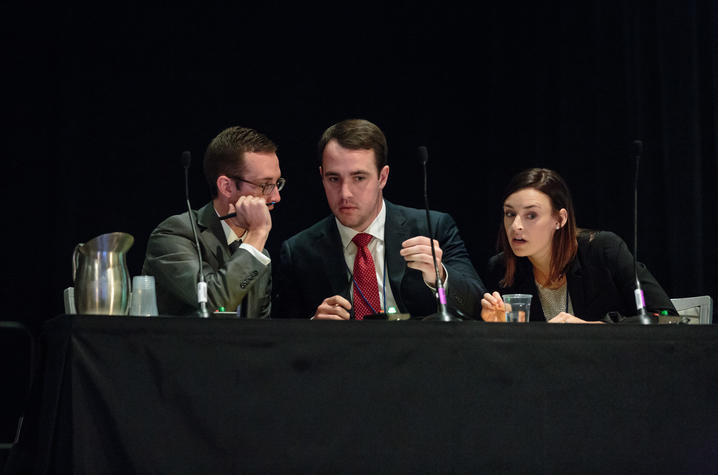 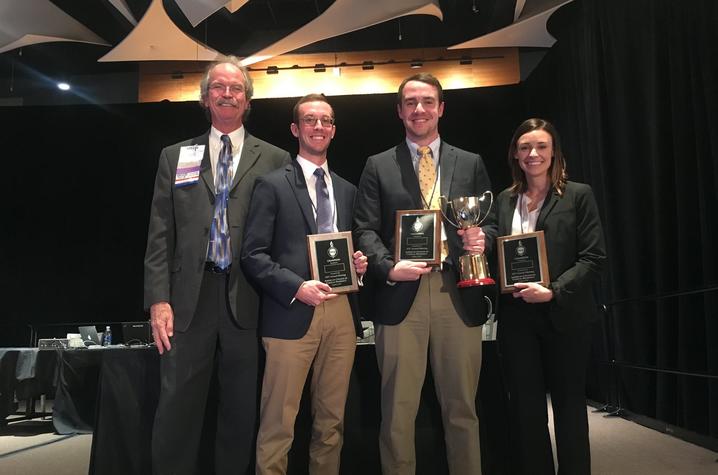 The Clinical Pharmacy Challenge, now in its eighth year, allows teams of three pharmacy students to compete in a “quiz bowl” type competition. Zack Haffler, Jordan Rice and Drew Spargo competed on behalf of the UK College of Pharmacy. Samuel Fu and Chase Ayers were the team alternates and also competed in the early rounds of the seven-round competition.

Mentored by UK College of Pharmacy faculty members Robert Kuhn and Abby Bailey, along with help from clinical faculty and specialists, the UK team was ready for the competition.

“This team worked so well together and really took the extra time to review and prepare," Kuhn said. "Even technical problems in the semi-finals didn’t rattle them.”

Advancing to the finals from an initial field of 115 teams, the UK team matched up against the University of California-San Francisco (UCSF) for the title. Each round of competition comprises three segments: Trivia/Lightning, Clinical Case and Jeopardy-style items. Items were written and reviewed by an expert panel of ACCP members. UCSF pulled ahead during the Clinical Case.

The outcome of the competition came down to the last Jeopardy question, worth 300 points. Knowing the answer, Spargo buzzed in and let Haffler relay their answer out loud. The UK team was correct.

“The audience erupted in applause for the outstanding work of both teams," said Tina Denetclaw, faculty mentor for the UCSF ACCP. "We had everyone on the edge of their seats!”

“We’re so proud of their accomplishments,” said Kuhn.

Teams from UK College of Pharmacy have made it within the top eight teams, or quarterfinal rounds, three of the last five years. However, this is the first national championship for UK students.