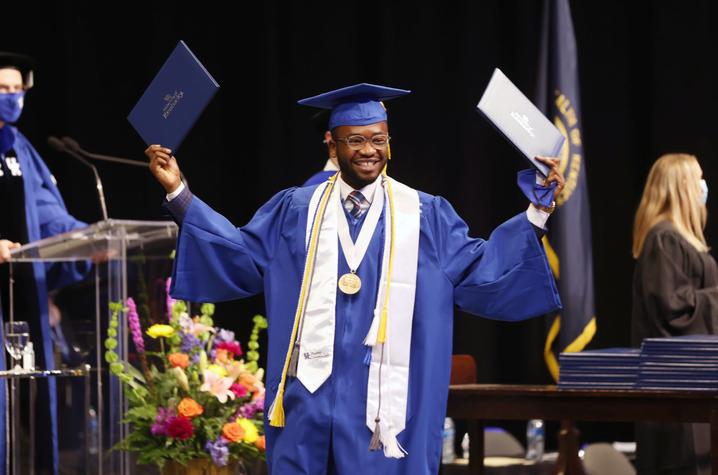 LEXINGTON, Ky. (Dec. 20, 2021) — In this “UK at the Half,” Bisimwa “Jack” Nzerhumana shares his story of resilience and how it feels to walk across the Commencement stage.

At just 5 years old, Nzerhumana saw things no human being, let alone a child, should ever have to see.

Born in the Democratic Republic of Congo (DRC), a country plagued for decades by civil war, political instability and exploitation, young Nzerhumana was exposed to horrific violence daily. At times, he and his family had to literally run for their lives.

At 6 years old, Nzerhumana and his family escaped Congo and migrated to a refugee camp in Kenya. But life didn’t dramatically improve for young Nzerhumana as a refugee. One day, when walking home from school, he was physically attacked. The assault resulted in a traumatic brain injury, impacting Nzerhumana’s occipital lobe to the point he lost his vision for an extended period of time. He spent many weeks in the hospital, but eventually made a full recovery.

A few years later, at age 12, Nzerhumana and his family migrated to the United States, where they settled in Lexington. After a successful high school experience, he decided he wanted to pursue a higher education at the University of Kentucky.

His childhood experiences inspired him to want to help others. He wanted to both motivate other refugees to attend college, and help others who have experienced traumatic brain injuries. He decided to major in neuroscience in the College of Arts and Sciences. He also declared a second major in psychology and was accepted into the Lewis Honors College.

Now, after just three and a half years, Nzerhumana has become the first person in his family to earn not just one, but two college degrees. He also gave the student address at his UK Commencement ceremony last week.