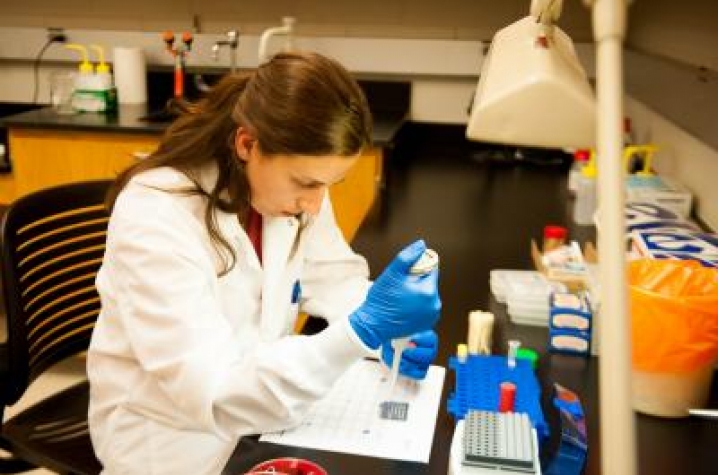 LEXINGTON, Ky. (Sept. 2, 2015) — Time can make all the difference in animal disease diagnosis. Early diagnosis can protect herd health, give veterinarians more choices and save lives.

For many diseases, it’s a waiting game to pinpoint the exact bacteria causing the problem. Traditional means of diagnosis heavily rely on culturing bacteria in old-school petri dishes. That’s still a tried-and-true method, but now scientists at the University of Kentucky College of Agriculture, Food and Environment’s Veterinary Diagnostic Lab are hailing a new technology as a game changer for Kentucky animal health.

MALDI-TOF, formally Matrix Assisted Laser Desorption/Ionization-Time of Flight, has been used in human medicine for many years. Now, veterinary labs across the country are using the technology to aid in bacteria identification.

“Let’s say a dog is sick; it’s having respiratory distress,” said Erdal Erol, UK VDL microbiologist. “The veterinarian wants to know how to treat the animal, so he or she sends us a sample. We grow the bacteria for 24 to 48 hours. Then we place the bacteria on a target, use the MALDI-TOF machine and we can give them an almost immediate answer.”

One metal-plate target can hold as many as 48 isolated bacteria. The scientist places the target at a slight angle at the bottom of the machine. The machine creates a vacuum and fires a laser at each sample to ionize the bacteria. Then it’s a race up the machine’s tube to determine the time of flight to the top. Obviously heavier, bigger ions travel slower and smaller ions travel faster. The machine measures highly abundant proteins, present in all microorganisms, and compares the results with the samples in the database to identify the bacteria.

“In about 25 minutes we can get an answer that can take several days with traditional biochemical processes,” said Erica Phillips, UK VDL research analyst. “Traditionally you grow the bacteria, wait 24 to 48 hours to look at your plates and see some bacteria growth. Then we’d begin other tests that can take up to 48 hours more. Some samples have to have even more testing.”

But in many cases, the sick animal does not receive treatment until the lab identifies the bacteria. The longer the animal has to wait, the more it suffers and the chance of the disease spreading grows.

“This technology is so much better for the practitioner,” Phillips said. “They can go ahead and find out what we think is significant and begin treatment; several days can make a big difference.”

Occasionally, the MALDI-TOF machine returns no reliable results because it can’t find the bacteria in the database. At this point, Phillips can fall back on traditional methods. Although it’s more work, Phillips sees it as an important part of the future of MALDI-TOF identification capabilities.

“We may see many things here in Kentucky that they don’t see other places around the country,” she said. “We are the horse capital of the world after all. But that’s an opportunity also, because we save many samples that the machine doesn’t identify and we will be able to add to the database at some point, so that particular bacteria or strain can be available to other scientists across the United States.”

Erol explained that right now the technology is only used to identify bacteria, but has the potential to help scientists find ways to diagnose other animal pathogens in the future.